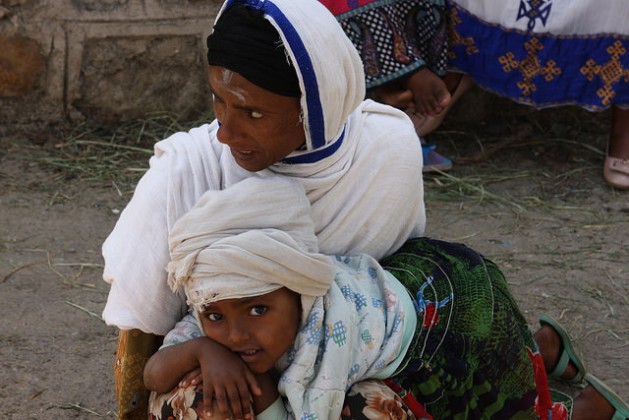 Woman and child outside a Gonder church with crosses marked in ash on their foreheads. Credit: James Jeffrey/IPS

BAHIR DAR, Apr 17 2017 (IPS) - As dawn breaks in Bahir Dar, men prepare boats beside Lake Tana to take to its island monasteries the tourists that are starting to return.

Meanwhile, traffic flows across the same bridge spanning the Blue Nile that six months ago was crossed by a huge but peaceful protest march.

“They were waiting for an excuse to shoot.” --Priest in Bahir Dar

But only a mile farther the march ended in the shooting of unarmed protesters by security forces, leaving Bahir Dar stunned for months.

Events last August in the prominent Amhara cities of Bahir Dar (the region’s capital) and Gonder (the former historical seat of Ethiopian rule) signalled the spreading of the original Oromo protests to Ethiopia’s second most populace region.

By October 9, following further disasters and unrest, the ruling Ethiopian People’s Revolutionary Democratic Front party declared a six-month state of emergency, which was extended at the end of this March for another four months. 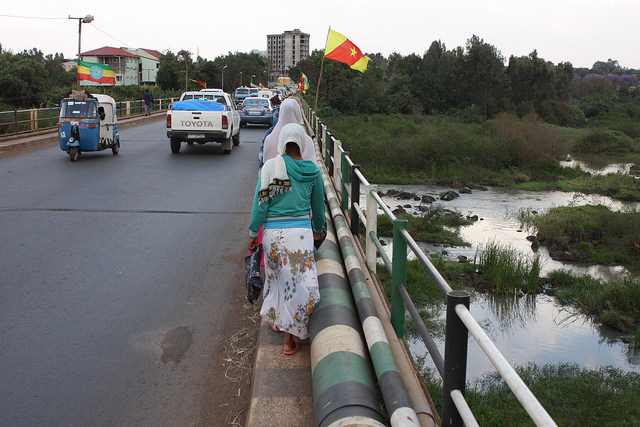 Ethiopian national flags and regional Amhara flags flutter along the bridge over the Blue Nile on the road going east from Bahir Dar that the protesters took last year. A mile on from the bridge the peaceful march descended into tragedy with shots fired into the crowd. Credit: James Jeffrey/IPS

On the surface, the state of emergency’s measures including arbitrary arrests, curfews, bans on public assembly, and media and Internet restrictions appear to have been successful in Amhara.

Now shops are open and streets are busy, following months when the cities were flooded with military personal, and everyday life ground to a halt as locals closed shops and businesses in a gesture of passive resistance.

Speaking to residents, however, it’s clear discontent hasn’t abated. Frustrations have grown for many due to what’s deemed gross governmental oppression. But almost everyone agrees that for now, with the state of emergency in place, there’s not much more they can do.

“Now it’s the fasting period before Easter, so people are praying even more and saying: Where are you God? Did you forget this land?” says Stefanos, who works in Gonder’s tourism industry, and didn’t want to give his name due to fear of arrest by the Command Post, the administrative body coordinating the state of emergency.

“Because people can’t protest, they are praying harder than ever.”

The four-month extension to the state of emergency contains less sweeping powers than before. Now police need warrants to arrest suspects or search their homes, and detention without trial has officially been ended. But grievances remain about what happened before.

“Someone will come and say they are with the Command Post and just tell you to go with them—you have no option but to obey,” Dawit, working in Gonder’s tourism industry, says of hundreds of locals arrested. “No one has any insurance of life.” 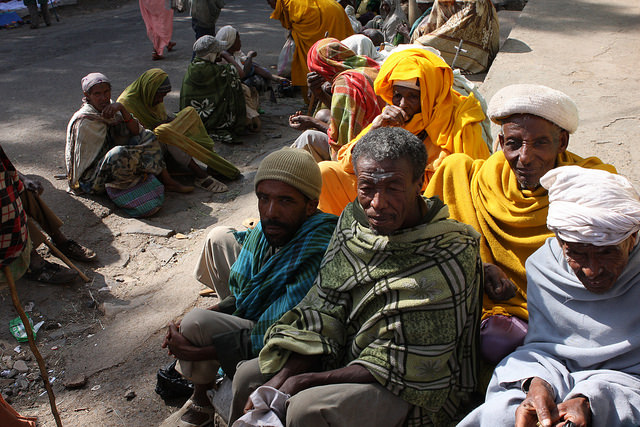 Locals recall how if young men gathered in too large a group they risked getting arrested.

“The regime has imprisoned, tortured and abused 20, 000-plus young people and killed hundreds more in order to restore a semblance of order,” says Alemante Selassie, emeritus law professor at the College of William & Mary and Ethiopia analyst. “Repression is the least effective means of creating real order in any society where there is a fundamental breach of trust between people and their rulers.”

Across Gondar, many unemployed men seek distraction by chewing the plant khat, a stimulant that motivates animated conversation about security force abuses and the dire local economic situation.

“If you kill your own people how are you a soldier—you are a terrorist,” says 32-year old Tesfaye, chomping on khat leaves. “I became a soldier to protect my people. This government has forgotten me since I left after seven years fighting in Somalia. I’ve been trying to get a job here for five months.”

Beyond such revulsion and frustration, some claim the state of emergency has had other psychological impacts.

“Continued fear and distrust of the [ruling] regime by the Ethiopian people,” says Tewodrose Tirfe of the Amhara Association of America. “Continued loss of hope for a better form a government where basic human rights of the Ethiopians are respected.”

For many the memories of what happened during protests last summer are still raw, especially for Bahir Dar residents.

Tens of thousands gathered in Bahir Dar’s centre on August 7 before marching along the main northeast-running road out of the city toward the Blue Nile River, carrying palm tree leaves and other greenery as symbols of peace.

After crossing the bridge there are various versions about what happened next.

Some say a protester attempted to replace Ethiopia’s current federal national flag flying outside a government building with the older, pan-Ethiopian nationalistic flag—now banned in Amhara—an argument ensued and the guard shot the protester.

But there is less uncertainly about what happened next.

“Security forces suddenly emerged from buildings and shot into the march for no reason,” says an Ethiopian priest, who spoke on condition of anonymity. “They were waiting for an excuse to shoot.”

It’s estimated 27 died that day, the death toll rising to 52 by the end of the week. A total of 227 civilians have died during unrest in the Amhara region, according to government figures, while others claim it’s much higher.

“Two people on my right side dropped dead,” says 23-year-old Haile, marching that day. “One had been shot in the head, one in the heart.”

Such violence was unprecedented for Bahir Dar, a popular tourist location, known for its tranquil lake and laid-back atmosphere.

“The city went into shock for months,” says the Ethiopian priest.

But as the months have passed, normal daily life has gradually reasserted itself.

“People are tired of the trouble and want to get on with their lives,” says Tesfaye, a tour operator. “But, then again, in a couple of years, who knows.”

Many criticise the government for failing to address long-term structural frictions between Ethiopia’s proclaimed federal constitution and an actual centralist developmental state model, as well as failing to resolve—with some saying it actively stokes—increasing ethnic tensions.

“Three years ago I went to university and no one cared where you were from,” says Haile, a telecommunication engineer in Bahir Dar. “Now Amhara and Tigray students are fighting with each other.”

“Federalism is good and bad,” says Haile’s friend Joseph, who is half Tigrayan and half Amhara. “Ethiopia has all these different groups proud of their languages and cultures. But [on the other hand] even though my father is Tigray, I can’t go and work in Tigray because I don’t speak Tigrayan.”

Joseph pauses to consider, before continuing.

“This government has kept the country together, if they disappeared we would be like Somalia,” he says. “All the opposition does is protest, protest, they can’t do anything else.”

Finding such a view in Gonder is much harder.

“The government has a chance for peace but they don’t have the mental skills to achieve it,” says tourist guide Teklemariam. “If protests happen again they will be worse.”

The main road between Gonder and Bahir Dar winds up and down steep hillsides, surrounded by mountains, cliffs and tight valleys stretching to the horizon.

Ethiopia’s vertiginous topography has challenged foreign invaders for centuries. But it’s potentially a headache for domestic rulers too, added to which militarism is a traditional virtue in the Amhara region.

In Gonder, men talk admiringly of an Amhara resistance movement which conducted hit-and-run attacks on soldiers when they occupied the city, before withdrawing into the surrounding mountains.

“The farmers are ready to die for their land,” the Ethiopian priest says. “It’s all they have known, they have never been away from here.”

According to Gonder locals, armed farmers have been fighting Ethiopian security forces for months.

“I saw dozens of soldiers at Gonder’s hospital with bullet and knife wounds,” says Henok, a student nurse, who took part in the protests. “The government controls the urban but not the rural areas.” 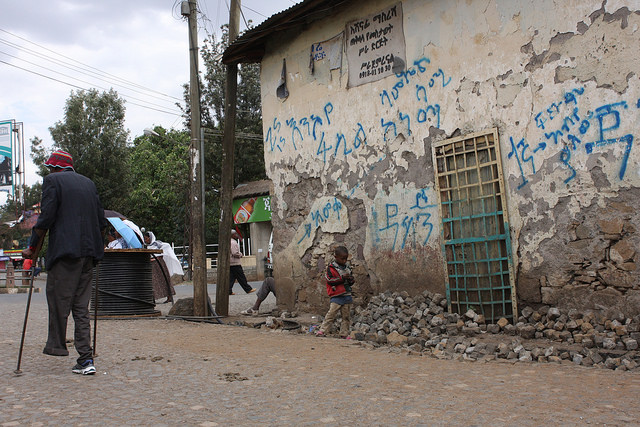 Young men like Henok talk passionately of Colonel Demeke Zewudud, a key member of Amhara resistance arrested by the government in 2016, and even more so about Gobe Malke, one of the leaders of the farmer insurrection until he was killed this February, allegedly at the hands of his cousin in the government’s payroll.

“If the government wants a true and real form of stabilization, then it should allow for a true representative form of governance so all people have the representation they need and deserve,” Tewodrose says.

“But the concern of the TPLF is the perception from the international community, so they can continue to receive and misuse foreign aid.”

In his role with the Amhara Association of America, Tewodrose presented a report to a U.S. House of Representatives Committee on Foreign Affairs hearing March 9 about “Democracy Under Threat in Ethiopia”. The report also detailed 500 security forces killed during fighting in Amhara—Gonder locals claim many more.

“Before I die I just want to see Ethiopia growing peacefully and not divided by tribes,” says 65-year-old grandmother Indeshash, housebound in Gonder due to ongoing leg problems. “If my legs worked I would have protested.”