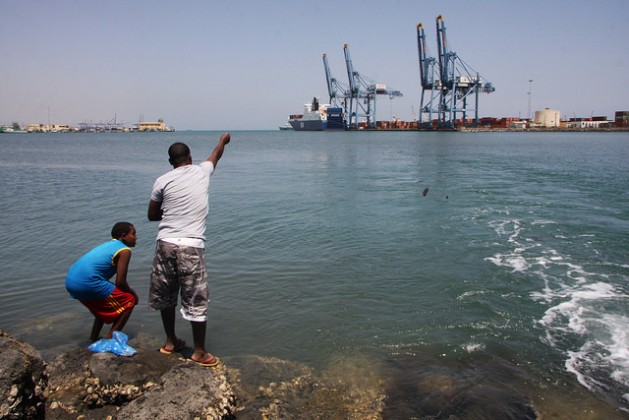 Djibouti’s strategic and commercial relevance at the junction of Africa, the Middle East and Indian Ocean is further bolstered by its increasing network of ports. Credit: James Jeffrey/IPS

DJIBOUTI CITY, Apr 5 2017 (IPS) - As balmy night settles over Djibouti City, the arc lights come on at its growing network of ports as ships are offloaded 24 hours a day and trucks laden with cargo depart westwards into the Horn of Africa interior.

Not that long ago Djibouti was known for little more than French legionnaires, atrocious heat and its old railway line to Addis Ababa in Ethiopia. Nowadays, however, this tiny republic of only about 900,000 people on the Horn of Africa coast has big plans, including turning its capital into the Dubai of Africa.

Since gaining independence from France in 1977, Djibouti has steadily carved out a regional role through its strategic and commercial relevance at the junction of Africa and the Middle East, and at the confluence of the Red Sea and the Gulf of Aden, overlooking a passage of water used by 30 percent of the world’s shipping transiting from and to the Suez Canal.

Recently-acquired Chinese investment totaling more than 12 billion dollars is funding the building of six new ports, two new airports, a railway, and what is being touted as the biggest and most dynamic free trade zone in Africa, potentially giving the capital, Djibouti City, an edge over its rivals.

“About 2 million African customers travel to Dubai each year,” says Dawit Gebre-ab, with the Djibouti Ports and Free Zones Authority overseeing the city’s commercial infrastructure development. “We know what is on their shopping lists, and they could be coming here instead.”

Helping secure such ambitions is the fact that Djibouti is viewed as offering some of the most prime military real-estate in the world, both to counter piracy threatening that key shipping lane—since peaking in 2011, when 151 vessels were attacked and 25 hijacked, piracy has steeply declined—and to shore up regional stability.

Another foreign diplomat referred to Djibouti as “an oasis in a bad neighbourhood”.

In 2014, the US military agreed a 10-year extension to its presence—with an option to extend for another 10 years—centered on Camp Lemonnier, its African headquarters.

US president Barack Obama described the camp as “extraordinarily important not only to our work throughout the Horn of Africa but throughout the region.”

A similar perspective happens to be held by China, also. In addition to its Djibouti investments, having invested huge amounts in the rest of East Africa—especially in neighboring Ethiopia, one of the world’s fastest growing economies, and 90 percent of whose imports come through Djibouti—it wants to secure those interests and others throughout sub-Saharan Africa. 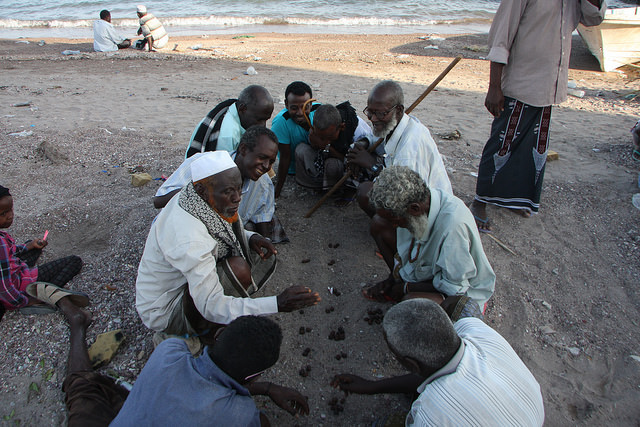 Furthermore, ever thirsty for crude oil, China wants to shield its heavy dependence on imports from the Middle East that south of Djibouti pass from the Gulf of Aden into the Indian Ocean and then on to the South China Sea.

In 2016 China finalized plans for a new base in Obock, a small port a couple of hours by ferry from Djibouti City northward across the Gulf of Tadjoura. About 10,000 Chinese personal will occupy the base once complete.

Foreign military already stationed in Djibouti—including from France, Germany, Netherlands, Spain and Japan—number around 25,000, according to some estimates.

But behind all the construction cranes, flashy hotels and military camps, there still exists a very different side to Djibouti.

Every morning in the small town of Tadjoura, about 40km west of Obock along the coastline, local Djiboutians queue to collect their daily quota of baguettes—a scene repeated across the country.

Djibouti’s former existence as colonial French Somaliland has left an indelible Gallic stamp. Along with Somali, Afar and Arabic, French remains one of the main languages used. 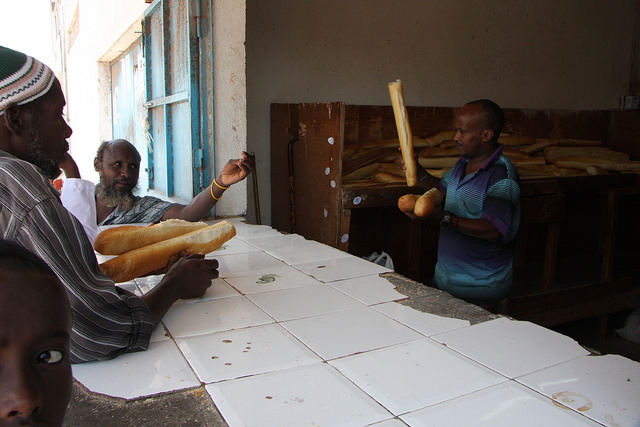 Locals in Tadjoura, a small town across the Gulf of Tadjoura from Djibouti city, buying their daily baguettes, a legacy of French colonial rule. Credit: James Jeffrey/IPS

A constant stream of Bonsoirs greet the visitor during an evening wander around Djibouti City’s so-called European quarter and its focal point: Place du 27 Juin 1977, a large square of whitewashed buildings and Moorish arcades named for the date of independence.

South of the quarter’s French-colonial-inspired architecture and orderly avenues and boulevards, lies the dustier and more ramshackle African quarter.

But whether that lively cultural mix can withstand the brash new modernizing development is a concern for some locals, proud of the country’s past and heterogeneous mix of traditions.

“My fear is not about cultural change, because we need that as this is an ultra-conservative society,” says an elegant Djiboutian professional in her early thirties, her hair covered in the Muslim style, and a cigarette clasped in her slender fingers as the sun dips behind the original old port in the distance.

“It is more about the effects on our customs, such as traditional clothing, food and decorations that symbolize our identity.” 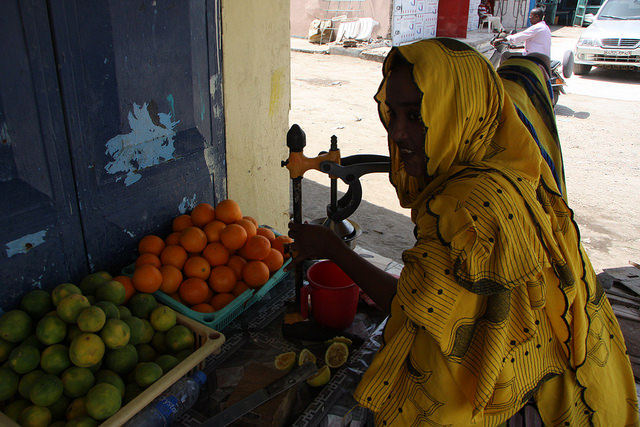 Others are more outspoken in their criticism of Djibouti’s current strategic and economic upswing—a healthy 6 percent a year, and likely to surpass 7 percent amid the construction boom.

Some locals talk of a country run by a business-savvy dictatorship that has reaped profits from its superpower tenants while not doing enough to relieve widespread poverty; having signed an initial 10-year lease for the base, China will pay 20 million dollars per year in rent. The US pays 60 million dollars a year to lease Camp Lemonnier.

“The government only cares about how to collect the country’s wealth,” says a Djiboutian journalist previously arrested for reporting domestic issues. “They do not care about freedom of expression, human rights, justice and equal opportunities of people.”

Dreams of a Dubai-type future don’t appear to have much relevance for most local Djiboutians, 42 percent of whom live in extreme poverty, while up to 60 percent of the labor force are unemployed, according to current estimates.

“Now I can’t stay here,” says Mohammed, a marine engineer, who left Iraq after the 1991 war for Djibouti where he married a local woman. “My three children won’t be able to get good enough jobs. I’m hoping my brother in the US will be able to get us a green card.”

A 2014 US State Department human-rights report on the country cited the government’s restrictions on free speech and assembly; its use of excessive force, including torture; as well as the harassment and detention of government critics.

Even the hugely popular use of khat by locals is manipulated by government officials as a means of repression, critics claim. It’s alleged government affiliates facilitate its sale in the country as a money maker and means of keeping a potentially frustrated populace calm, while handing it when campaign season rolls around to win favor.

Meanwhile, ships endlessly glide to and from the ports, where cranes offload containers to waiting trucks late into the night under the arc lights.

In early 2017, the new Chinese-built 4-billion-dollar railway officially opened linking Djibouti to the Ethiopian interior—the original railway has lain abandoned for years—and which could eventually connect to other Chinese-built railways emerging across the African continent.

Djibouti’s location has always been its most precious resource—devoid of a single river or the likes of extractable minerals, it produces almost nothing.

Nevertheless, for nearly 150 years it has attracted armies, mercenaries, smugglers, gunrunners and traders: anyone and everyone concerned with the movement or control of merchandise. And that trend only seems set to increase.

“Ethiopia has a population 100 times larger than Djibouti’s but it only imports and exports six times as much,” says Aboubaker Omar, chairman and CEO of Djibouti Ports and Free Zones Authority. “Imagine the day that demand matches Ethiopia’s population size.”