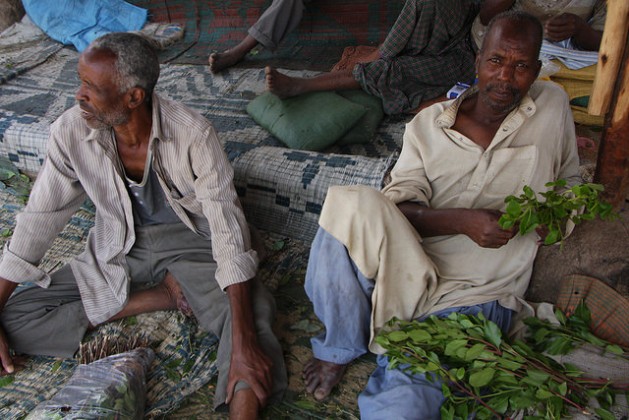 As the hours pass they animatedly discuss economics, politics, history, life and more while chewing the leaves. The gathering is a picture of civility. But in many countries khat has a bad reputation, with it either being banned or prompting calls for it to be banned.

Khat is an institution, wielding enormous economic impact, as well as playing a major social and cultural role in societies.

Understanding khat—or as it is also known and spelt: jima, mira, qat, chat, cat; and whose leaves when chewed act as a psychotropic stimulant with what some would call amphetamine effects—is far from straightforward.

This innocuous-looking plant has experts variously claiming it is as mild as tea or as addictive as cocaine. Hence a few years ago khat’s international reputation presented a particularly conflicting picture: it was legal in Britain, banned in the US, celebrated in Yemen and vilified in Saudi Arabia.

In the Horn of Africa, khat is an institution, wielding enormous economic impact, as well as playing a major social and cultural role in societies. In the Somaliland capital, Hargeisa, you won’t find much khat-related dissent.

“It brings people together, it facilitates discussion of issues and exchanging information,” says local journalist Abdul, the corners of his mouth speckled with green mush. “In the West it’s often difficult for people to interact, but here they learn about their neighbours and what problems they have.”

It’s estimated 90 percent of Somaliland’s adult male population—and about 20 percent of women—chew khat for mirqaan, the Somali word for the buzz it can give.

Nowadays khat is so enmeshed with Somaliland culture and daily life it’s an important tax earner for Somaliland’s government. In 2014, khat sales generated 20 percent of the government’s 152-million-dollar budget, according to the Somaliland Ministry of Finance.

Khat is also the No. 1 employer in Hargeisa, the Somaliland capital, generating between 8,000 and 10,000 jobs, thereby offering much-needed respite to the country’s chronic unemployment problem that see 75 percent of its youth workforce jobless.

Meanwhile, for Ethiopia, khat is a major earner: Somaliland spends about 524 million dollars a year—about 30 percent of gross domestic product—on Ethiopian khat (many suspect the true figure to be much higher). 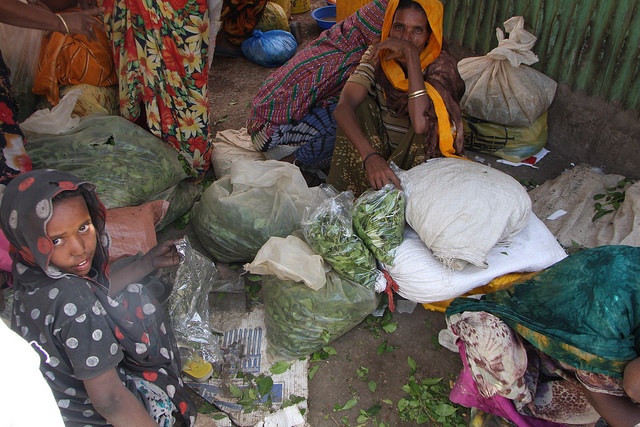 Another of Ethiopia’s eastern neighbours, Djibouti, is reportedly Ethiopia’s most lucrative external market. Hence the Ethiopian government looks on khat as a useful exportable product to other countries, bringing in sorely need foreign currency, the access to which presents a perennial problem in Ethiopia.

Much of Ethiopia’s prime khat grows in the hills around the prominent eastern Ethiopian cities of Dire Dawa and Harar, about 150km from the border with Somaliland. In Dire Dawa’s Chattara market, khat trading continues late into the night under naked lightbulbs iridescent in the hot darkness.

Between these two cities is the city of Aweday, which despite its smaller stature is in fact the hub of Ethiopia’s khat trade—hence its nickname: khat city.

The morning after the nightly trade and dispatch of bundles of khat around the region and world, every street beside the main road running through Aweday is covered in discarded green leaves. Meanwhile, trucks loaded with khat are hurtling eastward along rough roads through the Ethiopian lowlands, and planes with identical cargo are threading through azure skies, to make their deliveries in Djibouti, Somaliland and beyond.

Lower quality khat costs about 12 dollars a kilo in Hargeisa, rising to 26 for medium quality and 58 for high quality. The majority of customers typically spend between 2 and 10 dollars for a day’s worth of khat that throughout Somaliland amounts to a national daily spend of 1.18 million dollars, and from which the government gets its important tax cut.

“I worry about the health effects but it helps me with my work,” says Nafyar, who often works late nights for his administrative job in Hargeisa.

“To really understand khat you have to chew it.”

But others are far less willing to go to give khat the benefit of the doubt.

“The problem comes down to the man not being part of the family and the woman being left to do everything,” says Fatima Saeed, a political advisor to Somaliland’s opposition Wadani Party, who previously worked for 15 years with the United Nations. “Men sit for hours chewing—it’s very addictive.”

She highlighted other potential consequences for those chewing: “It can bring about hallucinations, sleeplessness, loss of appetite, deaden sexual urges, while in others it increases them.”

Furthermore, others point out the flipside of khat’s supposed economic windfall.

“Khat is a massive burden on Somaliland’s fragile economy since it means that a large percentage of its foreign currency is used to purchase khat,” says Rakiya Omaar with Horizon Institute, a consultancy firm that works on strengthening the capacity and self-reliance of institutions in Somaliland. 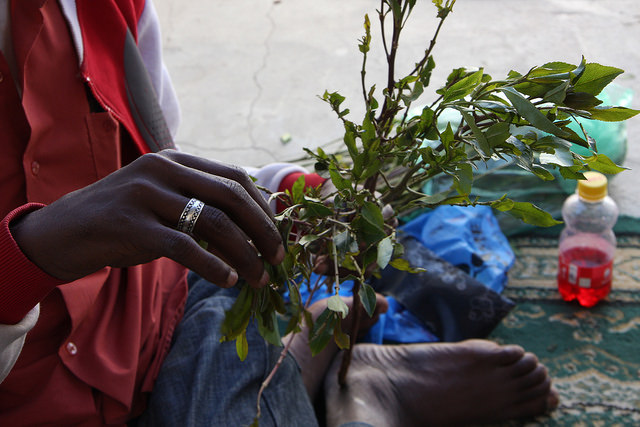 Another problem stems from the fact that for khat to have the desired stimulating effect it must be chewed continuously for hours.

“We need to develop this country, and for that you should be working eight hours a day, but that’s not happening here,” says Omar, a British Somalilander who returned to Hargeisa to take advantage of perceived business opportunities in the emerging economy. He explains how many employees work half a day and then head off for an afternoon of khat.

Khat is accused of causing dependency at the detriment of gainful employment. Unemployed Somalilanders are certainly not deterred from their khat habit that can cost up to 300 dollars a month as they while away jobless hours, borrowing money from friends.

Saeed says she supported lobbying to ban khat in the UK, and which proved successful with a ban being implemented in 2014, due to the negative impact khat was having on the Somali diaspora community there.

“Khat would arrive at 5 p.m. on the plane and by 6 p.m. men had left homes and wouldn’t return until 6 a.m.,” Saeed says. “After the ban it was like people woke up from a deep sleep—they started looking for jobs, being part of the family.”

But in the political context of Somaliland remaining an unrecognised country, cut off from global financial systems and investment, khat trade provides an obvious viable and sustainable commercial opportunity. Take that away and Somaliland’s economy might face even more strain.

Khat has a long history in the Horn of Africa and surrounding region. Its leaves were viewed as sacred by the ancient Egyptians, while Sufi religious men chewed khat to remain awake during nocturnal meditations on the Koran—hence khat’s affiliation with the divine. Now khat exists very much in the mainstream.

“It’s better than alcohol as you can still function normally afterwards,” says Abdul, who chews whenever he is on deadline. “It affects people differently, it depends on your personality: after khat some like to read, others to work.”

Among the 10 percent of Somaliland men not chewing khat, however, opinion differs markedly.

“I don’t chew as I know the effects,” says 24-year-old university lecturer Abdukarim at a busy Hargeisa coffee shop. “Initially you feel happy, confident, strong and high. The problem is the result. At the end you are weak. It should be banned, but I don’t want to say more here.”

Regulation of when khat’s imported across the border from Ethiopia and sold during the day in Somaliland would help temper present problems, Saeed says, as would implementing an age limit—currently there isn’t one. But, she adds, the present government won’t take any action due to the amounts of money and vested interests involved.

But many others continue to defend khat, arguing it plays an important communal role.

Well before the UK ban, the London Institute for the Study of Drug Dependence issued a factsheet stating: “In cultures where its use is indigenous, khat has traditionally been used socially, much like coffee in Western culture.”

Khat undercuts preconceived ideas, challenging our conceptions of what a drug is, of what addiction is, of what an addicted society looks like.

“I chewed khat for 30 years,” says one Yemeni man in the group meeting that Sunday afternoon. A successful businessman in Addis Ababa, he is smoking cigarettes but not chewing—the only one in the group. “Now I’ve had enough. I don’t miss it.”