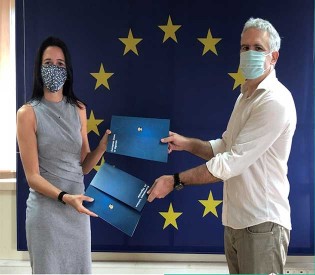 By GGGI
The European Union (EU) represented by the European Commission in Uganda and the Government of Uganda through the Global Green Growth Institute (GGGI) have signed a contract today to cooperate on advancing the Greening Uganda’s Urbanization and Industrialization agenda. This project is part of the European Union’s Inclusive Green Economy Uptake Programme (GreenUP) financed under the 11th European Development Fund (EDF) and will be implemented for a 36 months period with a total cost estimated of just under EUR 5mln. The MoU was signed by European Union in Uganda and Ms. Dagmar Zwebe, Country Representative of the GGGI Uganda office.

By GGGI
In November 2018, a team of GGGI investment and bio-economy specialists have been travelling around the Ayeyarwady Delta and meeting members from national and regional government, NGOs, farming associations, businesses and communities to scope potential bio-economy commodities and investments that will enable socially inclusive green growth, and support national goals of climate change mitigation and adaptation in coastal areas.

By GGGI
In November 2018, a team of GGGI social development, and green investment specialists have been talking to representatives from national and regional government, NGOs, cookstove manufacturers and households from rural communities on how to increase the distribution and usage of fuel efficient cookstoves.

By GGGI
In November 2018, GGGI have been exploring potential investments in agriculture, forestry and fishery value chains that not only increase economic and social development, but also reduce deforestation pressures and increase the extent of mangrove forests. GGGI investment, forestry policy and bio-economy specialists have been consulting with communities, NGOs and government in the Ayeyarwady Delta to understand the factors that are critical to achieve fully inclusive, sustainable success, and support national goals of climate change mitigation and adaptation in coastal areas.

By GGGI
The Hungarian Government approved on December 21, 2018 (Government Decision 1770/2018. [XII. 21.]) the establishment of the Western Balkans Green Center (WBGC), a new instrument to support the implementation of the Paris Agreement. Designed with the support of GGGI under a cooperation project supported by the Ministry for Innovation and Technology of Hungary, the WBGF will support climate actions in six countries: Albania, Bosnia and Herzegovina, Kosovo*, Republic of Northern Macedonia, Montenegro and Serbia.

By GGGI
The Republic of the Union of Myanmar signed a Memorandum of Understanding with GGGI on February 9, 2017 to collaborate in implementation of green growth strategies and projects; and to strengthen the government’s institutional framework for Monitoring, Reporting and Verification of national greenhouse gas emissions, climate change adaptation and mitigation actions and support.

By GGGI
Improving gender equality can have a profound effect on economic growth and is integral to maximising green growth, according to a new policy brief by the Global Green Growth Institute (GGGI).