*Since this story was reported, there have been reports of additional restrictions being introduced at the Zalambessa crossing point, making it harder to cross without official authorisation, while other crossing points operate more freely. The situation remains fluid.

ADDIS ABABA, Feb 6 2019 (IPS) - The sudden peace between Ethiopia and Eritrea, and the opening of their previously closed and dangerous border, sent shockwaves of hope and optimism throughout the two countries. But a new issue has arisen: whether Eritreans coming into Ethiopia should still be classed as refugees. 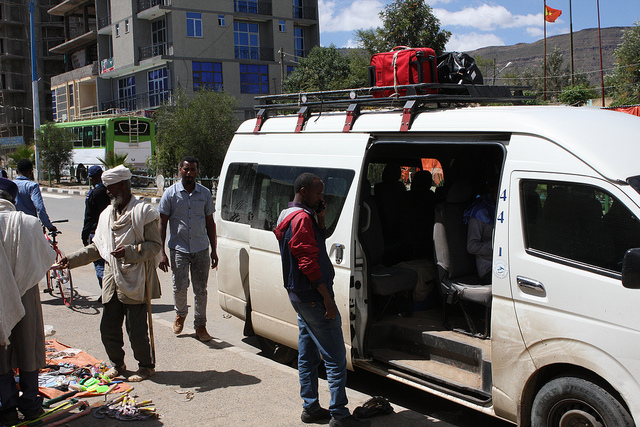 “Asmara! Asmara! Asmara!” There is a new cry from the boys leaning out of minibuses picking up customers in the cities of Ethiopia’s Tigray region, which straddles the border with Eritrea. Here a minibus stops for a lunch break during its 300-kilometer journey between Mekelle, the Tigray capital, and the Eritrean capital, Asmara. The historic shift in Ethiopia-Eritrea relations means Eritreans can cross one of the world’s former most dangerous borders without a passport or permit. Credit: James Jeffrey/IPS 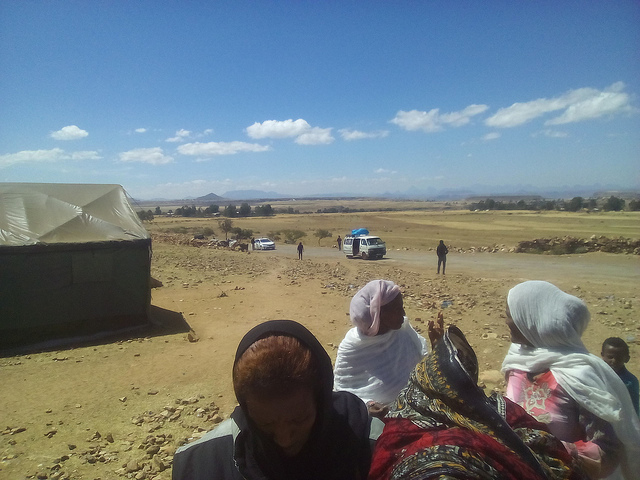 More nuanced reality: Eritreans cuing at the Eritrean border check point, before heading north to Asmara, illustrates how not all Eritreans want refugee status in Ethiopia, despite most media narratives leaving out the nuances and portraying an endless flow of feeling Eritreans. “I went from Addis Ababa to Asmara after the border opened to see my father for the first time in 26 years—he died 10 days after I arrived,” says Senait, an Eritrean who moved to the Ethiopian capital after marrying an Ethiopian but wasn’t able to visit her family after war broke out in 1998 between the two countries, thereby closing the border. “Now I am going back to take his brother, my uncle, to live in Asmara. It will be better for him to be with family there than in Addis. But I will return to my family in Ethiopia.” Credit: James Jeffrey/IPS 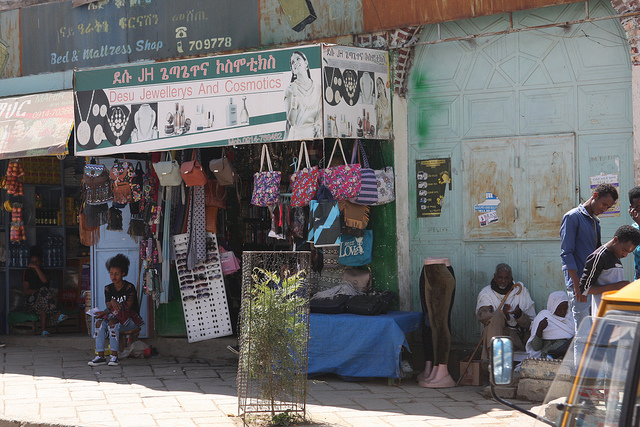 Long awaited freedom of movement: The wide palm tree-lined avenues of Mekelle, and its marketplace, have seen a rush of Eritreans coming to reunite with family and enjoy the more vibrant social life and shopping scene, before returning to Eritrea. Credit: James Jeffrey/IPS 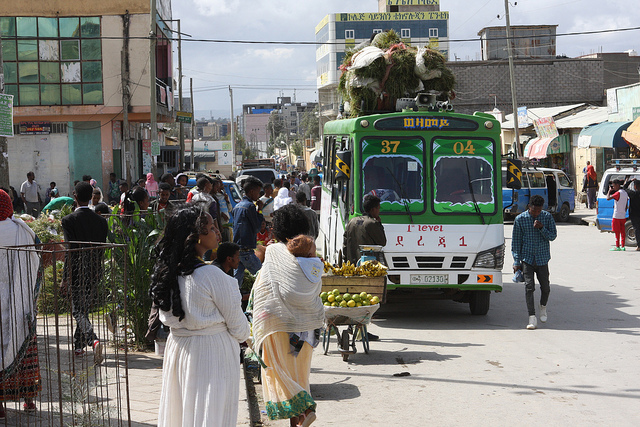 Long awaited freedom of movement: Once known for hosting convoys of camels carrying salt from the Danakil desert, Mekelle’s bustling market has lately seen an increase in sales of cereals, construction materials and petrol. “In Eritrea they are limited to how much they can take out of the bank each month, but here they can get money sent by relatives abroad,” says Teberhe, a Mekele entrepreneur. “They are taking back construction materials in case building restrictions are reduced at home.” Credit: James Jeffrey/IPS 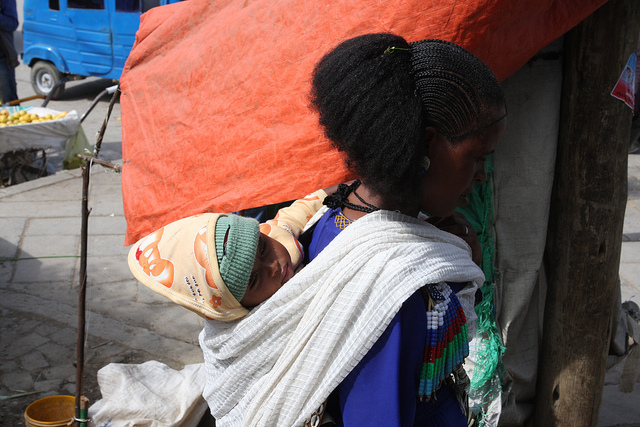 Shared bonds and styles: The back and forth over the border is helped by many people in Eritrea and Tigray having shared the same language, religion and cultural and social traditions going back centuries before Eritrea’s independence from Ethiopia in 1993. Credit: James Jeffrey/IPS 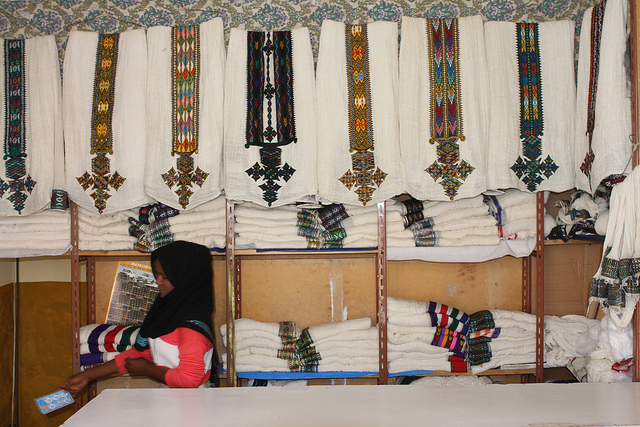 Shared bonds and styles: “We have a strong affinity with Eritreans,” says Mekelle resident Huey Berhe, noting how most Tigrayans have Eritrean relatives, and vice versa. “We are the same people. I can feel the agony of isolation they have endured; I have lots of friends whose families were separated by the war.” Credit: James Jeffrey/IPS 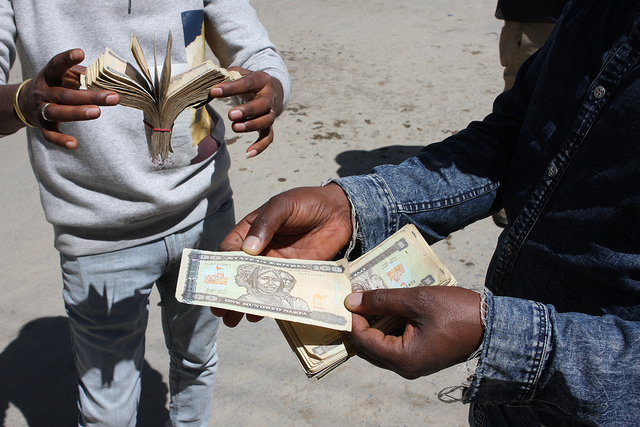 Peace—but also prosperity?: “Business is pretty good,” says Tesfaye, who usually works at the cement factory outside Mekelle but at the weekend earns extra money by exchanging Ethiopian birr and Eritrean nakfa for travelers crossing the border. “It’s a good opportunity while the banks aren’t changing money yet.” The open border has seen merchandise and trade flowing freely both ways, and merchants in Tigray cities and in Asmara profiting by the uptick, with talk of only more economic activity to come. Credit: James Jeffrey/IPS 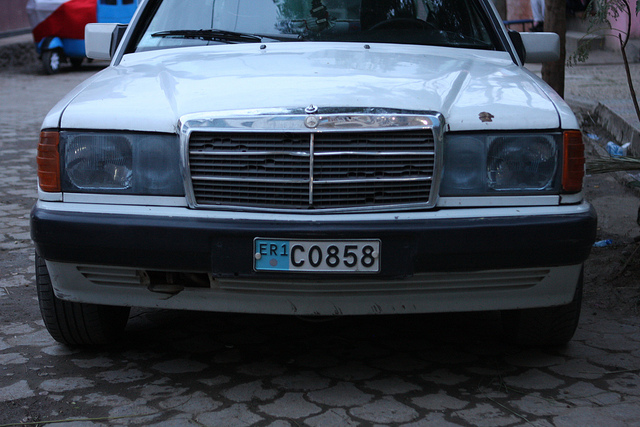 Motoring to Mekelle: Tired-looking cars with the distinctive Eritrean registration plate beginning ER1 can be seen joining minibuses on the main road through Tigray to the border or parked around Mekelle. “We’ve had lots of Eritreans staying,” says Ruta who owns Lalibela Hotel in the center of Mekelle. There’s also been a surge in room rentals in Mekelle thanks to Eritreans looking for work. Credit: James Jeffrey/IPS 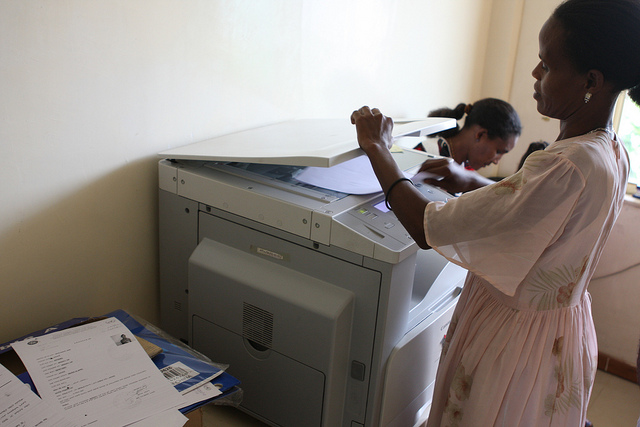 Refugee process still continues: A worker photocopying refugee application forms at the Tigray office for Ethiopia’s Administration for Refugee and Returnee Affairs, known as ARRA. “Ethiopia is a signatory to the Geneva convention on refugees, so for now there is no change in their refugee status,” says Tekie Gebreyesas with ARRA. “The relationship between the two countries has improved, but the internal situation in Eritrea is still the same.” Credit: James Jeffrey/IPS 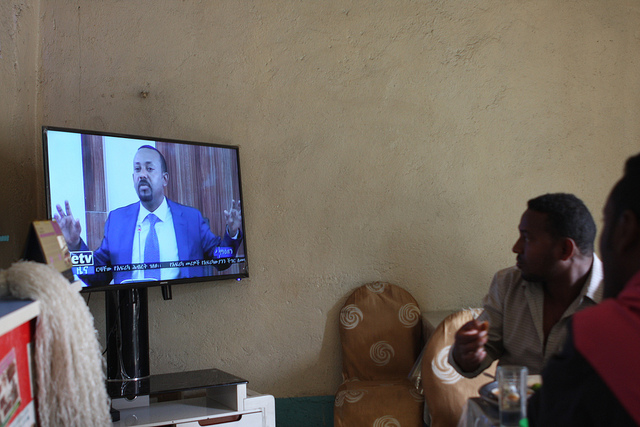 Glued to the reforming prime minister: Lunchtime diners watch a broadcast showing Ethiopia’s popular new leader, Abiy Ahmed, who shocked all by offering peace to Eritrea. The dilemma that Ethiopia now faces over Eritrean refugees reflects a challenge at a global level to better understand the realities of refugee life. “Refugees are always portrayed as victims,” says Milena Belloni, who has researched Eritrean refugees for a decade. “It misses the reality, that they have capabilities and come with dreams, desires and aspirations.” Credit: James Jeffrey/IPS 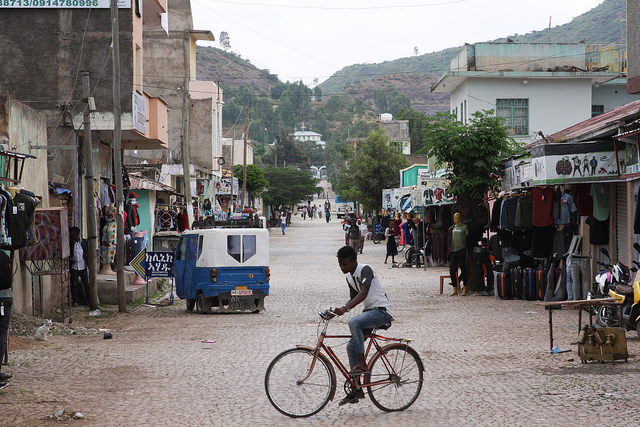 Refugees and peace not a contradiction: The Tigray city of Shire, not far from the border and where the UNHCR’s regional office is, has also seen its fair share of Eritrean arriving. A UNHCR worker who wasn’t willing to be quoted noted that around the world almost all countries receiving refugees do so while at peace with the country refugees are leaving—hence there is nothing unusual about Ethiopia and Eritrea reconciling while the refugee flow continues. Credit: James Jeffrey/IPS 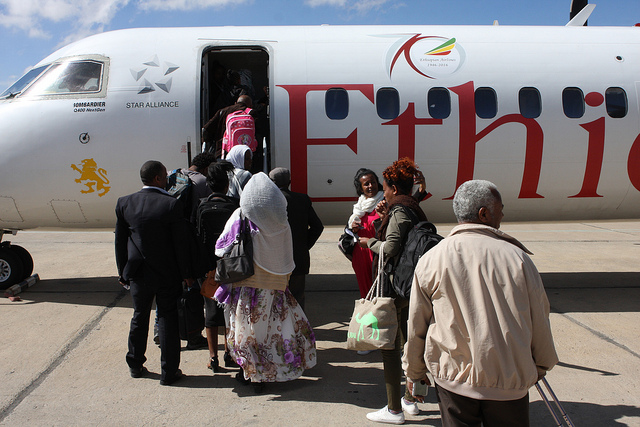 Travel opens eyes: Ethiopian airlines has restarted flights to Asmara, though Ethiopians often choose the cheaper option of taking a domestic flight between Addis Ababa and Mekelle, before continuing by bus. The overall situation and options available remain fluid, and there could be even more changes ahead. “I don’t think there is any way back now for the Eritrean government,” Teberhe says. “Eritreans are experiencing freedom—the genie is out of the bottle.” Credit: James Jeffrey/IPS

*Some names have been changed or omitted due to the requests of those interviewed.