GAMBELLA, Ethiopia, May 6 2019 (IPS) - Right up against the border with South Sudan, the western Gambella region of Ethiopia has become a watchword for trouble and no-go areas as its neighbour’s troubles have spilled over. But now there may be reason for optimism on either side of the border. 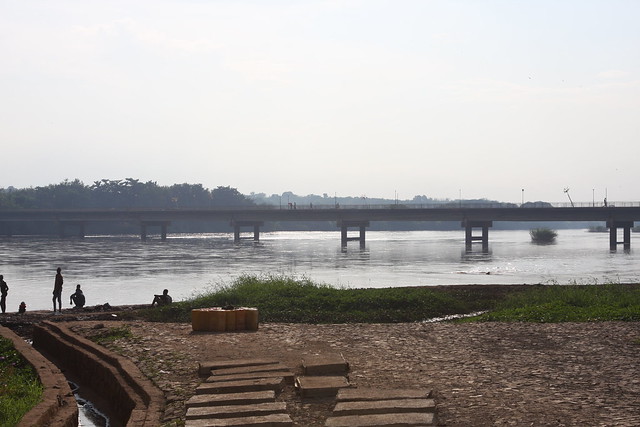 The brown waters of the Baro River meandering through the Ethiopian city of Gambella—from which the surrounding region takes its name—coupled with an atmosphere of tropical languor creates an almost cliched archetype of the Western idea of an African river port. Except for the fact that there is not a single boat on the river. The 2013 outbreak of civil war in South Sudan, whose border lies 50 kilometres from the city, put an end to the thriving trade that once plied this waterway between Gambella and Juba, the South Sudanese capital. Credit: James Jeffrey/IPS 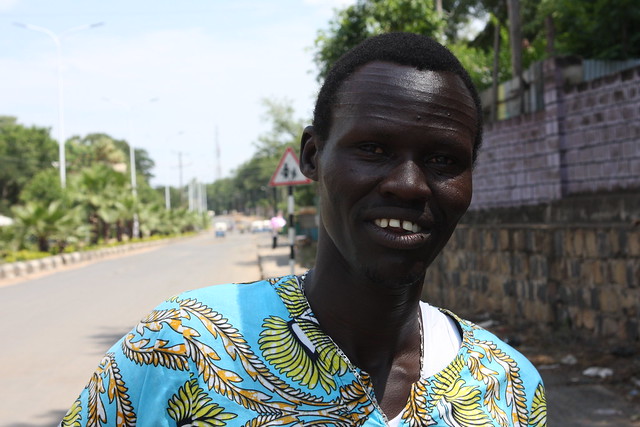 It is hard to visit Gambella and not be struck by the height of many locals, some with horizontal scarification lines across their foreheads. The Nuer are one of five ethnic groups populating the region. Close ties and tensions between the Nuer and Anuwak, the two largest ethnic groups, representing about 45 percent and 26 percent of the population, respectively, date back centuries. The modern border between the two nations does not delineate where either group lives nor is movement across the South Sudan-Ethiopia border a new phenomenon. Credit: James Jeffrey/IPS 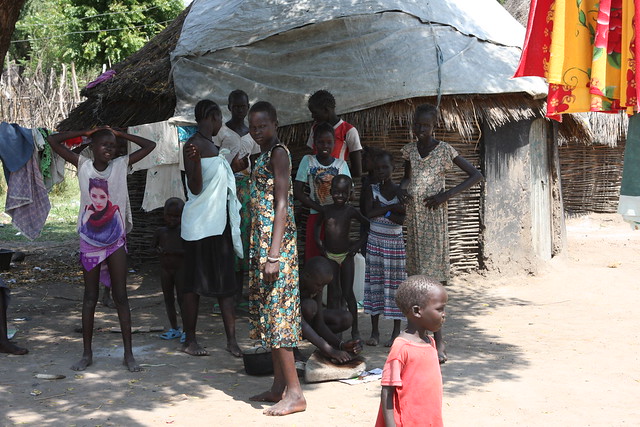 When war broke out in 2013 in South Sudan, refugees poured into neighbouring Gambella. Today, 485,000 South Sudanese refugees lived in the Gambella region, according to United Nations High Commissioner for Refugees, the UN refugee organisation. Some displaced Nuer brought arms across the border, destabilising an already tense region. “The fact that the Nuer and Anuwak exist on both sides of the border makes it easy for people of both communities to pass backwards and forwards, taking with them their conflicts both between the two tribes but also at the national level,” says John Ashworth, who has been working in South Sudan and the surrounding region for the last 30 years. Credit: James Jeffrey/IPS 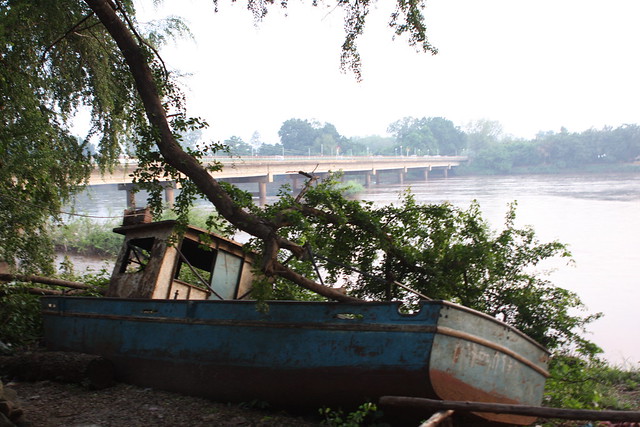 This is the closest you will come to finding a boat in Gambella nowadays. “The river used to be full of boats and trade before 2013 and the war broke out,” one Gambella local says of the Baro River and its tributaries flowing across the border. Nowadays the most urgent traffic around the city comes from the plethora of white SUVs, plastered with the logos of almost every NGO to be found in Ethiopia. Some locals are employed by NGOs as drivers and translators, but the vast majority of locals struggling to get by see little of the money generated by Ethiopia’s refugee industry. In 2018 the budget required for Ethiopia’s total refugee population—around 900,000 people—was estimated at 618 million dollars. Credit: James Jeffrey/IPS 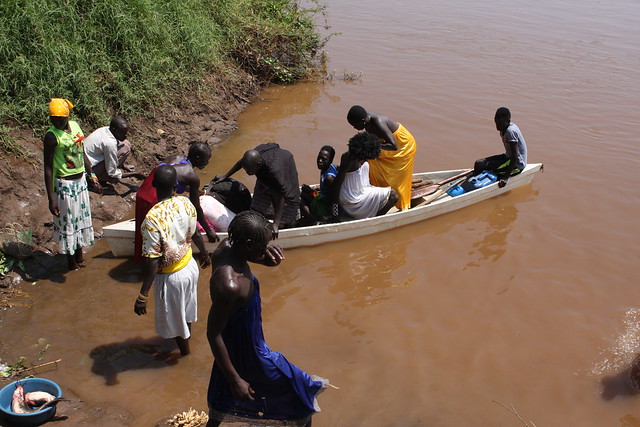 Gambella city has an intriguing modern history, in which the Baro River plays a crucial part. In the late 19th century, Britain came knocking, seeing the Baro’s navigable reach to Khartoum as an excellent highway for exporting coffee and other produce to Sudan and Egypt. The Ethiopian emperor granted Britain the use of land for a port and Gambella was established in 1907. Only a few hundred hectares in size, this tiny British territory became a prosperous trade centre as ships from Khartoum sailed regularly during the rainy season when the water was high. The Italians captured Gambella in 1936 but it was back with the British after a bloody battle in 1941. Gambella became part of Sudan in 1951, but was reincorporated into Ethiopia five years later. Credit: James Jeffrey/IPS 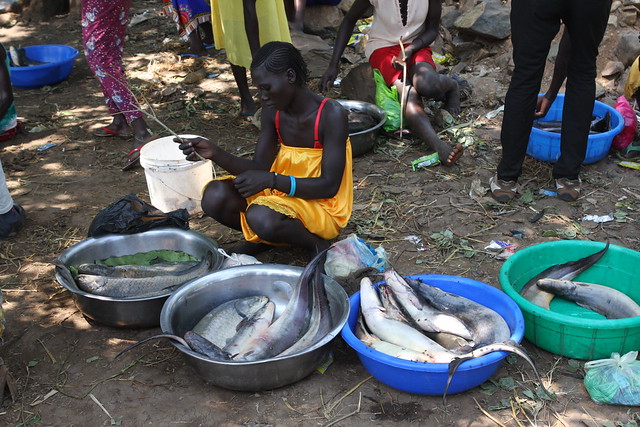 Here a woman sells fish in a small market. Everyday life appears slow and peaceful. But the Gambella region has gained a reputation as a no-go area among foreigners and Ethiopians alike. Back in 1962, the first of several civil wars broke out next door in Sudan at the start of a 50-year quest for South Sudanese independence, and from which Gambella could not remain immune. The stigma attached to the region hasn’t been helped by the Ethiopian government’ tendency to take a dismissive view of the region, underscored by a prejudice—one that extends throughout Ethiopian society—that the blacker one is the less Ethiopia you are, says Dereje Feyissa, a senior advisor at the Addis Ababa-based International Law and Policy Institute. “The Ethiopian centre has always related to its periphery in a predatory way,” Dereje says. “This is not only because of the geographic distance but also the historical, social and cultural differences which the discourse on skin colour signifies.” Credit: James Jeffrey/IPS 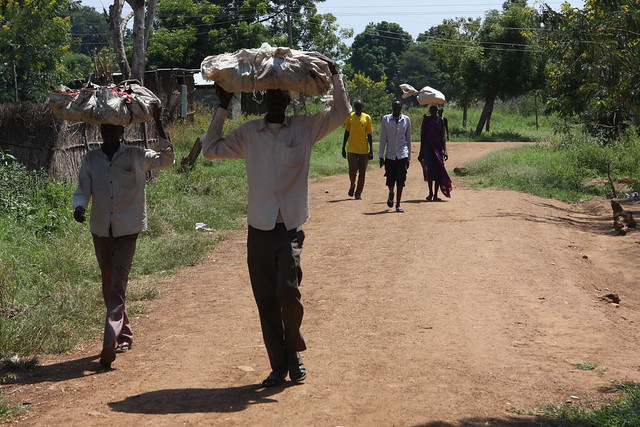 Local men carrying wrapped-up dried fish on their heads walk through an Anuwak village. The Gambella region is something of an anomaly in Ethiopia, displaying stronger historical, ethnic and climatic links to neighbouring South Sudan. “This was not the Ethiopia of cool highlands and white flowing traditional dress, but Nilotic Africa, in the blazing southwestern lowlands near the Sudanese border,” recalls Steve Buff, a former Peace Corps Volunteer. “This was much closer to our childhood National Geographic images of Africa than any place we’d seen before in Ethiopia.” Credit: James Jeffrey/IPS 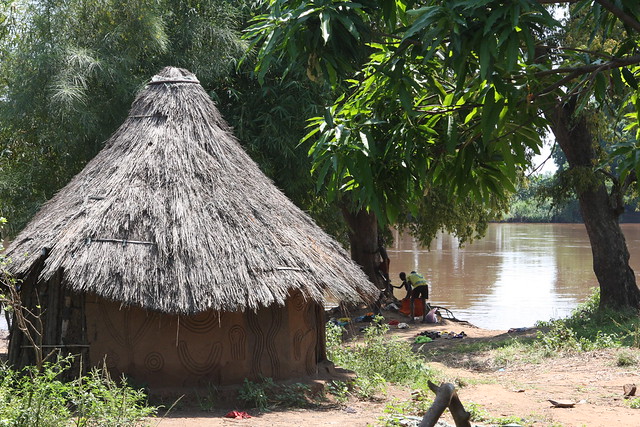 Since the latest peace agreement between South Sudan’s warring factions late last year, the indications seem more promising than with previous peace agreements that fell apart. By December 2018, the security situation in South Sudan had significantly improved, stated Jean-Pierre Lacroix, head of United Nations Peacekeeping. And by February this year, David Shearer, head of the UN Mission in South Sudan, told reporters in New York that political violence has “dropped dramatically.” Shearer added that the success of the peace agreement will be partly measured by the extent to which people return to home towns and villages. Credit: James Jeffrey/IPS 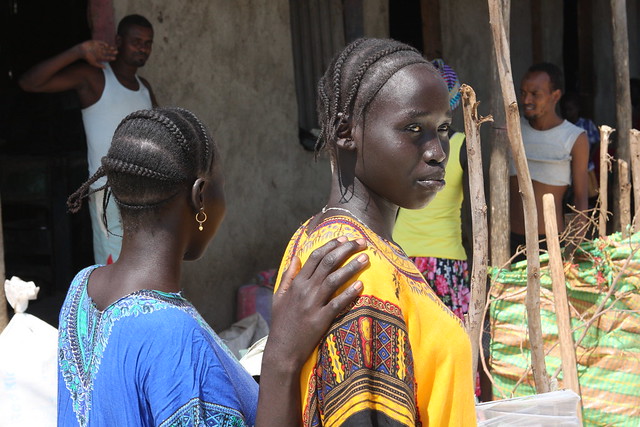 This year the UNHCR has reported spontaneous movements of South Sudanese refugees from various Gambella-based camps heading toward South Sudan, an estimated 5,000 since mid-December. Perhaps a good sign of what Shearer discussed? Interviews with the refugees, however, indicated they were returning to South Sudan for fear of retaliatory action following clan-based conflicts in camps, while some said they were going to visit their families, and would eventually return to the camps in Gambella. Credit: James Jeffrey/IPS 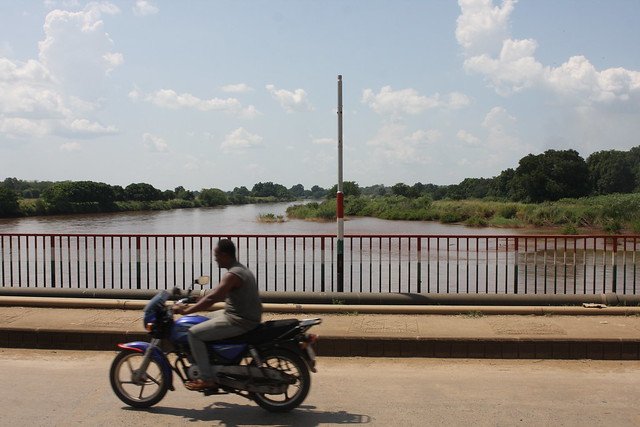 “This time it is different, as the international community is involved,” a South Sudanese refugee in Gambella remarked while reading Facebook posts on his smartphone about the latest peace deal. At the same time, the time it has taken to overcome the animosity of the past and get to the current stage of the peace process suggests there will be South Sudanese refugees in Gambella for some time yet. Meanwhile, the Baro River will flow on undisturbed by river traffic through a land of limbo caught up in the surrounding troubles, its seemingly placid surface deceiving to the eye. “There are plenty of crocodiles, though you won’t see them as the water is high,” a local man says. Credit: James Jeffrey/IPS