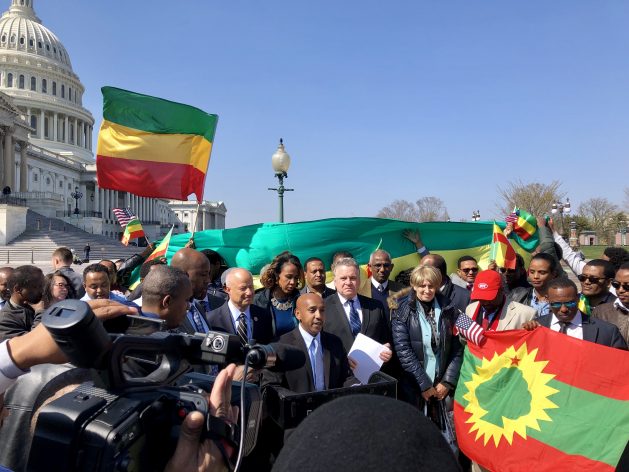 WASHINGTON, May 10 2018 (IPS) - The April inauguration of Ethiopia’s new Prime Minister came amid much fanfare and raised expectations for the future of true democracy in Ethiopia, while far less publicized though relevant developments in the American capital could also play a significant role in shaping that future.

At a relatively youthful and spritely 42 years of age, Abiy Ahmed is widely seen as a reformer who can take the necessary steps to calm a nation that has been engulfed in unprecedented levels of political unrest since the end of 2015.

“The new resolution by the US House of Representatives is a reminder to the Ethiopian government that should it fail to reform, it can no longer rely on US largesse to contain problems at home.” --Hassen Hussein

Crucially, he heralds from the Oromo People’s Democratic Organization (OPDO), which represents the Oromo, Ethiopia’s largest ethnic group, and who have spearheaded protests against the ruling Ethiopian People’s Revolutionary Democratic Front (EPRDF) coalition party, of which the OPDO is a key member.

After the resignation of previous Prime Minister Hailemariam Desalegn, many warned that if the EPRDF chose a figure from its old guard it might well lead to more, perhaps worse, unrest.

That has been avoided with the party embracing a politician with greater public support, and the first Oromo head of government in Ethiopia has already traveled to several areas of the country, promising to address grievances and strengthen a range of political and civil rights.

But, as everyone knows and agrees on, Abiy faces numerous challenges domestically and externally in bringing stability back to Ethiopia and settling a discontented populace that is the second largest in Africa.

Also, the very fact of Abiy’s reluctance to push for the lifting of the state of emergency illustrates, observers say, how the internal dynamics of the EPRDF that played a large part in the undoing of Desalegn are still a force to be reckoned with.

The historical dominance of the Tigrayan People’s Liberation Front (TPLF) in the EPRDF continues to wield force and means Ethiopia’s new, apparently reformist, prime minister will need to deal shrewdly with members of the establishment resistant to reform or reconciliation efforts—if Abiy is, in fact, genuinely for reform, that is.

“I like the things [Abiy] has been saying in public—most of the country and many in the opposition at home and abroad resonate with the sentiments expressed in his public statements,” says Alemante Selassie, emeritus professor at the William and Mary Law School in the US.  “Still, I cannot say that I have full confidence in him, because he is a party functionary who rose through the ranks of the EPRDF and probably remains committed to upholding its hegemonic rule for the foreseeable future.”

Nevertheless, whatever the inner workings of the new prime minister’s mind, as an ex-army officer he understands the military-security apparatus and its culture; he has a strong party mandate and public support behind him, and he comes to power at a time when those previously in charge are reviled by the populace, thereby putting him in a unique position to potentially resolve many of the country’s problems.

Furthermore, recent developments in the US Congress may also have a bearing on what happens next. On April 10, the US House of Representatives unanimously adopted House Resolution-128: “Supporting respect for human rights and encouraging inclusive governance in Ethiopia.”

The resolution—uunusually outspoken for US public policy in it criticism of Ethiopia’s government—condemns “the killings of peaceful protesters and excessive use of force by Ethiopian security forces; the detention of journalists, students, activists, and political leaders; and the regime’s abuse of the Anti-Terrorism Proclamation to stifle political and civil dissent and journalistic freedoms.”

The resolution and its wording deeply angered the Ethiopian government, which even suggested it might cut off security cooperation with the US if the resolution was passed. Ethiopia is viewed by the US as its most important ally in the volatile East African region, and hence receives one of the largest security and humanitarian aid packages among sub-Saharan African countries.

“The passage of HR-128 by the US House of Representatives without any opposition was a historical achievement,” says Tewodrose Tirfe, chair of the Amhara Association of America, a US-based advocacy group for the Amhara, Ethiopia’s second largest ethnic group. “The main difference this time, compared to previous attempts to get legislation through, was Ethiopian-American advocacy organizations working in coordination with human rights groups to bring to the attention of [US state] representatives the humanitarian and political crisis that has been unfolding in Ethiopia, especially the past three years.”

Congressman Chris Smith, Chairman of the House Subcommittee of Africa, Global Health, Global Human Rights, and International Organizations, introduced HR-128, and played a major role, along with Congressman Mike Coffman, in achieving the passage of the resolution.

“Chairman Smith has held more hearings and authored more legislation on Ethiopia then anyone in Congress—he has been a voice for the Ethiopian diaspora for many years,” Tewodrose says. “Congressman Coffman put his political capital on the line for this resolution and helped us overcome every hurdle encountered.”

The vast sum of humanitarian aid and bi-lateral support Ethiopia receives from the US is not at risk—yet.  That said, Tewodrose notes, the Senate is considering a partner bill, which is even stronger in its wording. Senate Resolution 168 calls on the Department of State and USAID “to improve oversight and accountability of United States assistance to Ethiopia and to ensure such assistance reinforces long-term goals for improved governance.”

Essentially, Tewodros explains, this would tie aid to improved governance and more scrutiny of support given, because even though resolutions aren’t laws and are non-binding, if they have strong bipartisan support—like HR-128—coupled with the fact that Congress has the power of oversight, then agencies named in the resolutions would seriously consider implementing the terms of these declarations.

Furthermore, the Amhara Association of America and other advocacy partners are working to introduce binding legislation that would be signed by the president and would become the law directing how the US deals with Ethiopia.

“We believe this is a much easier task now since the Ethiopian diaspora groups are activated and engaged, the policy makers are educated, and we have built strong bipartisan support in Congress,” Tewodrose says.

That said, opposition exists in the Senate to the senate resolution, and there is still some way to go before a new law guiding US foreign policy towards Ethiopia emerges. But any resolution about Ethiopia, such as HR-128, could still have an impact on the actions of the Ethiopian regime and the new prime minister’s reform agenda.

Previously, though the US government was aware of well-documented problems with regards to human rights abuses, lack of democracy promotion and corruption at the highest levels of the Ethiopian state, it didn’t forcefully act to pressure Ethiopia’s government.

But the House resolution signals a shift in that approach. Besides condemning killings, detentions, and abuse of Ethiopia’s Anti-Terror Proclamation, the resolution also makes more ambitious demands of the Ethiopian regime including reforms that would protect the Ethiopian people’s civil liberties and release political prisoners, views that the new prime minister is also believed to share.

“The resolution could give Abiy a freer hand to deal more decisively with those resisting change—so far he has been very conciliatory and accommodating,” says Hassen Hussein an academic and writer based in Minnesota.  “The new resolution by the US House of Representatives is a reminder to the Ethiopian government that should it fail to reform, it can no longer rely on US largesse to contain problems at home.”

While HR-128 is an important development, what further US legislation, if any, follows it, is likely to have the most tangible impact on strengthening—or not—the hand of the new prime minister in persuading those power brokers within the EPRDF who control country’s security apparatus and the intelligence and economic sectors, to participate in negotiations for reform.

“The TPLF has ruled Ethiopia for the last 27 years with the support of the US and the UK,” Alemante says. “If it loses this support— financial, military, diplomatic, etc.— it has very little else to stand on.”