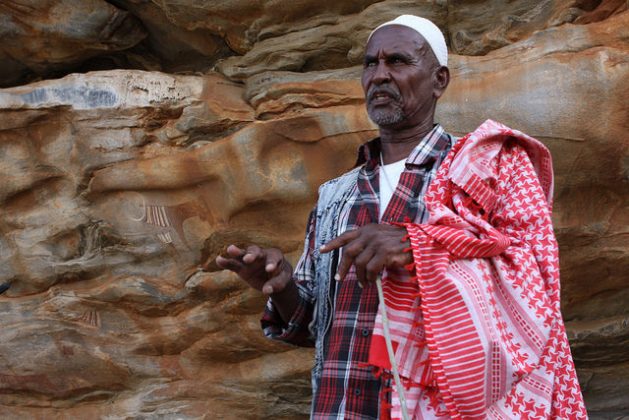 “When I was a boy we thought these pictures had some sort of devilish connection,” says 57-year-old Musa Abdi, who has spent his whole life around Las Geel and these days helps look after the site. Credit: James Jeffrey/IPS

Lying on the Gulf of Aden opposite Yemen, this ancient trading port’s sun-baked streets and waterline are steeped in history. The town’s old quarter is a wealth of pre-20th century Ottoman architectural gems and old neighbourhoods where Arab, Indian and Jewish trading communities once thrived.

“We have to act very soon if we are to save it from disappearing.” --Jama Musse, Director of the Red Sea Culture Centre

It would be a shoo-in candidate for becoming a UNESCO World Heritage Site, some say, were it not for Somaliland’s political limbo that means it is still viewed as part of Somalia—which hasn’t ratified the 1972 World Heritage Convention—and the fact that many of the buildings are crumbling at such a rate that soon there may be nothing for UNESCO to consider.

“Neglect and lack of awareness among Somalilanders is making the problem worse,” says Jama Musse, director of the Red Sea Culture Centre in Hargeisa. “I have not heard of any restoration schemes, and unfortunately we have to act very soon if we are to save it from disappearing.”

Berbera’s old quarter isn’t the only site under threat. About 100 kilometres to the west, deep in the Somaliland scrub-land, are the caves of Las Geel.

“This is one of the most important rock art sites in eastern Africa for at least two reasons,” says Xavier Gutherz, who led the team of French archaeologists that in 2002 discovered Las Geel. “The high number and quality of execution of the panels of rock art, and the originality of the representations of cattle and characters.”

But some of the 5,000- to 10,000-year-old renditions of primordial life are now unrecognizable smears due to lack of protection from the elements and animal activity.

“There isn’t money to look after the site better, our tourism department is tiny,” says Abdisalam Mohamed who works in the few ramshackle offices belonging to Somaliland’s ministry of tourism in the centre of Somaliland’s capital, Hargeisa. 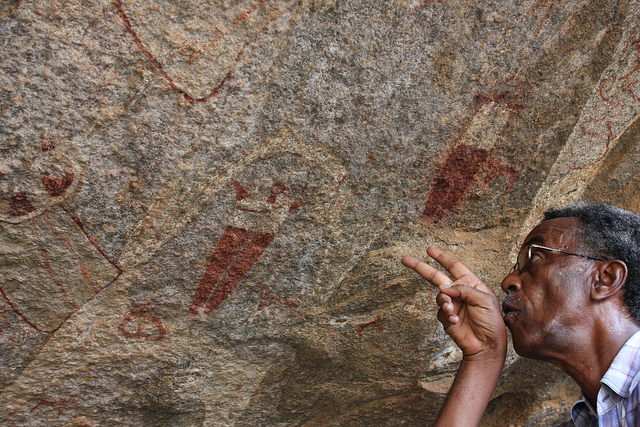 Still unrecognized by the international community since declaring independence more than 25 years ago after a civil war when part of Somalia, Somaliland’s government has a tiny budget. It is unable to access global finance or loans, instead relying on diaspora remittances to bolster the economy.

Supporting tourism infrastructure simply isn’t a priority in such circumstances. Hence many of Somaliland’s historical highlights could be lost—and with them the very basis of a potential tourism industry that could help boost the livestock exporting-dependent economy and change global perspectives about this wannabe nation state.

In addition to inadequate maintenance of historical sites, lack of funding means another of Somaliland’s potential tourism assets barely registers on the radar: its beaches, stretching for about 850 kilometres, which are almost entirely undeveloped.

“There’s very little at the beaches in terms of infrastructure—there needs to be more,” says Georgina Jamieson with tourism consultancy service Dunira Strategy, which conducted a feasibility study of heritage tourism as a driver of sustainable economic growth in Somaliland.  “We concluded that over the short term that Somaliland’s historical sites are its strongest assets.” 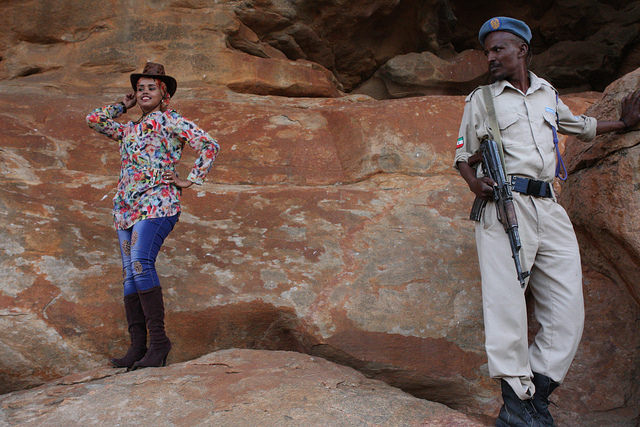 Las Geel draws foreign tourists and the Somaliland diaspora alike. There are hopes the site can one day be part of an expansive tourism industry in Somaliland. Credit: James Jeffrey/IPS

Somaliland can also offer tourists exposure to nomadic and pastoralist traditions; Islamic history, such as the Masjid al-Qiblatayn ruins at the seaside village of Zeila, one of the few ancient mosques featuring two mihrabs indicating the direction of Mecca; and the likes of the camel market in Hargeisa, and further afield the escarpment around the Daallo Forest, home to magnificent birdlife and hallucinogenic panoramas.

But even with so much to offer, attracting Western tourists is a tall order when their governments have travel advisories in place warning about Somaliland.

“Poor old Somaliland is placed with Syria and Yemen, and that means you won’t get hotel groups interested or foreign investment in infrastructure either,” says Jim Louth with adventure travel company Undiscovered Destinations that sends groups of tourists to Somaliland.

As with many of the country’s burdens, Somaliland’s image problem that impedes its tourism comes down to its continuing lack of statehood.

“The only way we can sell the country’s assets is to have international recognition,” Musse says. “Tourism will not grow without that recognition. It’s a simple fact. The world does not know about us.”

The upshot, Musse explains, is that foreigners don’t know who to contact, no one takes responsibility, and the types of institutions normally operating abroad to protect tourists’ interests don’t exist, which presents the danger of anyone offering advice without accountability.

There is, however, one potential tourist boost for Somaliland less dependent on Western travel advisories reforming.

“Ethiopia is our neighbour and with its large population offers a big market,” Mohammed Abdirizak, who runs Hargeisa-based Safari Travel Tour and Culture travel agency, says of the country with one of the world’s fastest developing economies and a population set to hit around 127 million by 2037, according to current estimates. “Many of its middleclass are going to Kenya and Djibouti for holidays when they could be coming here.”

Somaliland could also benefit from becoming an onward destination for the increasing numbers of foreign tourists lured to Ethiopia as its tourism industry takes off, says Mark Rowlatt, a 56-year-old habitual traveller planning his Somaliland itinerary from Hargeisa’s Oriental Hotel after visiting Ethiopia.

Around him on the walls of Hargeisa’s oldest hotel are posters depicting Somaliland’s beaches and historic sites under the hopeful banner of what might be: “Wonderful Somaliland—The Newest Tourist Destination in Africa.”

Some of those rooting for Somaliland tourism say the government isn’t doing enough, using its constrained budget as an excuse not to be more proactive while failing to appreciate how tourism is a means to tackle poverty and chronic unemployment rates that leave swathes of young men lounging on streets.

Despite all the challenges facing Somaliland, however, crime is rare, with the last terrorist attack in 2008. An armed escort is often mandated for travel outside the capital, but most say that has more to do with the government fearing how even one tourist-related incident would undermine efforts toward international recognition than with actual threat.

Foreign tourists choosing to take their governments’ travel advisories with a pinch of salt can visit in relative safety, usually reporting incident-free and enjoyable adventures.

The main challenge for most tends to be the midday heat, especially at Berbera simmering away at sea level. But relief is at hand at Baathela Beach on the outskirts of town.

“With its small waves it reminds me of the Mediterranean,” says Xavier Vallès, an NGO health consultant in Somaliland who grew up next to the beach in Barcelona, before wading into the cooling waters, utterly alone—other than the bored-looking armed guards beside his vehicle.

Meanwhile, back in the old quarter, goats opted to rest in the shade of the crumbling walls.