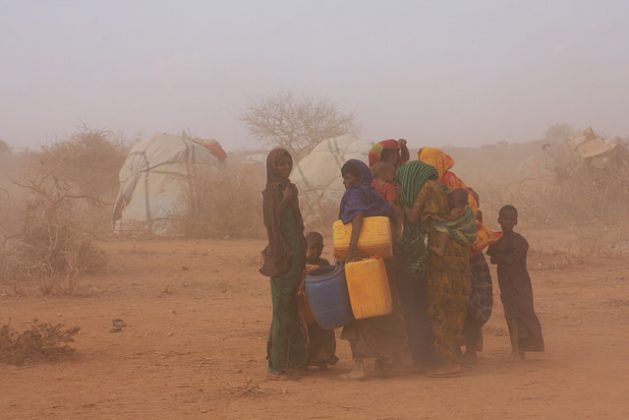 DOLO ODO, Ethiopia, Sep 5 2017 (IPS) - Grasping its limp leg, a woman drags the carcass of one of her few remaining black-headed sheep away from her family’s domed shelter fashioned out of sticks and fabric that stands alone amid the desiccated scrubland a few kilometers from the town of Dolo Odo in the southeast of Ethiopia near the border with Somalia.

“Once all my goats are dead, we will go to one of the settlements by the town,” says the Somali-Ethiopian pastoralist dealing with the fallout of the latest drought afflicting the Horn of Africa.

“Last year we dodged a bullet, but now the funding gaps are larger on both sides.” --Edward Brown, World Vision’s Ethiopia national director

In Ethiopia’s Somali region, whose inhabitants while ethnically Somali are Ethiopian nationals, there are 264 sites containing around 577,711 internally displaced persons—also known as IDPs—according to a survey conducted by the International Organization for Migration (IOM) between May and June 2017.

“For those who have lost everything, all they can now do is go to a government assistance site for food and water,” says Charlie Mason, humanitarian director at Save the Children Ethiopia until June this year. “They have no coping mechanisms left.”

But the scale of numbers means the government is overwhelmed—many sites have reported no access to food—hence international assistance is sorely needed. But international aid is often more geared toward those who cross international borders.

“Refugees get global attention—the issue has been around a long time, and it’s just how people look at it, especially if conflict is involved,” says Hamidu Jalleh, working for the United Nations Office for the Coordination of Humanitarian Affairs (OCHA) in the region. “Weather-induced IDPs hasn’t reached that level.”

IDPs are only one part of the humanitarian challenge for those tackling the drought in Ethiopia’s Somali region: 2.5 million people will require food assistance between July and December 2017, according to aid agencies, while some report this number is expected to be revised upwards of 3.3 million by mid-August.

The dilemma is made worse by the international humanitarian aid network already straining due to successive protracted global crises in the likes of Yemen, Somalia, Sudan and Nigeria.

“Due to a shortage of funding, we were only able to reach 1 million out of 1.7 million in the Somali region in June and July,” says Peter Smerdon, the United Nations World Food Programme regional spokesperson for East Africa. Drought does not recognize borders but international law divides people into refugees and IDPs. Under the 1951 Refugee Convention, crossing a border entitles refugees to international protection, whereas IDPs remain the responsibility of national governments.

On the edge of Dolo Odo, lines of corrugated iron roofs glint in the sun throughout a refugee camp housing 40,000 Somalis.

Refugees complain of headaches and itchy skin with the heat, and a recent reduction in their monthly food allowance. But at least that ration is guaranteed, along with water, health and education services—none of which are available to IDPs in a nearby settlement.

“We don’t oppose support for refugees—they should be helped as they face bigger problems,” says 70-year-old Abiyu Alsow amid the settlement’s ramshackle shelters. “But we are frustrated as we aren’t getting anything from the government or NGOs.”

Ethiopia’s Somali region contains the largest proportion of the total 1,056,738 IDPs identified by IOM throughout Ethiopia.

The existence of IDPs advertise the likes of internal conflict and disorder. Hence governments often approach the topic too gingerly, with IDPs then falling through the gaps—especially in Ethiopia.

“It’s only in the last year-and-a-half we’ve been able to start talking about IDPs,” says the director of a humanitarian agency working in Ethiopia, who spoke on condition of anonymity. “But the government is becoming more open about the reality—it knows it can’t ignore the issue.” Many within the aid industry praise Ethiopia’s open-door refugee strategy—in marked contrast to Western countries increasingly focusing on migrant reduction—that means it hosts more than 800,000 people. But questions remain about its handling of IDPs.

“This country receives billions of dollars in aid—there is so much bi-lateral support, but there is a huge disparity between aid to refugees and IDPs,” says the anonymous director. “How is that possible?”

IDP camps in the Somali region’s northern Siti zone that sprang up during droughts in 2015 and 2016 remain full.

“There’s no financial backing to tackle underlying vulnerabilities to get people back on their feet,” Mason says.

A major obstacle to helping those displaced by drought is how pastoralists aren’t the only ones facing depleted resources.

In 2016 the Ethiopian government spent an unprecedented 700 million dollars, while the international community made up the rest of the 1.8 billion needed, to assist more than 10 million Ethiopians effected by an El Niño-induced drought.

“Last year we dodged a bullet, but now the funding gaps are larger on both sides,” says Edward Brown, World Vision’s Ethiopia national director. “Large donors are making hard choices as they are having to do more with less.”

Currently the Ethiopian government and humanitarian partners have raised 553 million of the 948 million dollars needed to help 7.8 million drought-affected Ethiopians identified around the country.

Aid agencies tackling Ethiopia’s drought previously warned they would run out of funds to continue providing food by this July unless additional donor funds were forthcoming.

It appears that calamity has been avoided, for now. Ethiopian authorities say last minute donations from the UK, EU and US means they have enough money until October to keep up food shipments.

But that’s a long way from securing long-term viability for those trying to live in this sun-scorched part of the world.

“Since securing additional resources from donors, we are now able to provide emergency food assistance to additional people for the next three months in the Somali region,” Smerdon says. “If additional needs are announced, WFP will attempt to cover as many as possible.”