UNITED NATIONS, Aug 8 2013 (IPS) - The village of Hampi located in India’s southern state of Karnataka has long been an attraction for tourists from all over the world. 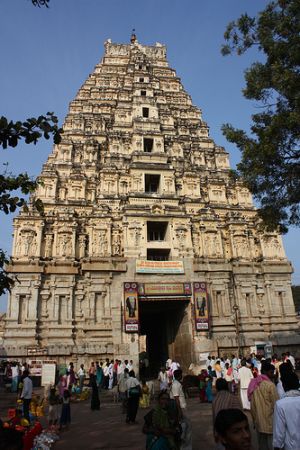 Visitors at the Virupaksha Temple in Hampi. Credit: Arian Zwegers/cc by 2.0

Modern-day Hampi is now home to the ruins of what was the last capital of the Vijayanagar kingdom.

The Group of Monuments in Hampi has been declared a World Heritage site by the United Nations Educational, Scientific and Cultural Organisation (UNESCO). But a recent road-widening project carried out by the state’s Public Works Department (PWD) in Hampi has drawn flak from UNESCO, activists and experts from all over the world.

The Hampi World Heritage Area Management Authority (HWHAMA), which is in charge of protecting the site, has sought an explanation from the PWD, according to various media reports.

Built by a local king in 1860, Dadapeer Chatra, the 153-year-old structure that served as a resting place for visitors was bulldozed by the PWD to widen a road.

And, in spite of it being a World Heritage structure, UNESCO was not informed before the construction work began.

And in Hampi’s case, “No permission was granted by UNESCO for this project and we have also learnt about the destruction of the building from news reports,” Rao said.

UNESCO has now taken up the matter with the Indian authorities to seek details of the incident and the action that they propose to take in this regard, Rao added. There are no penalties involved if the guidelines are violated as the World Heritage system is one of international cooperation, he told IPS.

But this approach is “certainly ineffective”, said John Fritz, co-director of the Vijayanagara Research Project.

“It is bureaucracy to bureaucracy,” Fritz told IPS, adding that UNESCO did not lodge any objections when heritage buildings in Hampi were tampered with earlier.

On the current construction work in the area, Fritz said there is a lack of will and effort to protect the history of the place. “They could have widened the structure and worked in a manner to avoid tearing down a heritage structure to widen a road,” he added.

Abha Narain Lamba, a conservation architect from India, believes that in an area like Hampi, “road-widening to my mind is rather unnecessary”.

Road-widening projects in historic areas of the neighbouring city of Hyderabad have already resulted in many historic facades being lost forever, she added. “ I wonder what road-widening can achieve in Hampi, given it is not a metropolitan area prone to traffic jams,” Lamba told IPS.

However, Vikas Dilawari, another conservation architect in India, believes that Hampi is just a case in point. “The concept of cultural investment is not known in our country as there are no immediate tangible benefits seen,” Dilawari said.

The problem is amplified by the lack of government support and failure on the part of the central government, the state government and the local bodies to arrive at a consensus when it comes to protecting heritage structures, he added.

Kathleen D. Morrison, director of the South Asia Language and Area Centre, University of Chicago, seconds that. There is a distressing lack of communication between departments and agencies when it comes to managing India’s cultural heritage, she said.

“This incident also points to the need for better education about and pride in India’s rich cultural heritage,” Morrison said.

In India, there are centrally protected monuments and those protected by state governments. But in case of Hampi, there are various parties involved who are responsible for taking care of the monuments.

The Archaeological Survey of India under the Ministry of Culture looks after the centrally protected monuments at Hampi, while the State Department of Archaeology takes care of its listed monuments, said Himanshu Prabha Ray, chairperson of National Monuments Authority (NMA) in India.

At Hampi, where monuments are found over a very large area and belong to several different periods of history, a local authority has also been constituted for the protection of monuments and a management plan has been worked out, Ray added.

While sustainable development and preservation of history continue to be a challenge in this day and age, the problem when it comes to protecting heritage structures is further compounded by the widespread belief among opinion leaders that money spent on protection of heritage is a drain on resources and that the same expenditure could be better utilised for development projects, experts say.

In the long run, the apathy towards Hampi might make it difficult for the 33 other properties in India that that are seeking World Heritage status from UNESCO, said Dan Thomspon, director of the Global Projects and Global Heritage Network (GHN).

And when it comes to protecting Hampi’s heritage, there are currently 44 sites all over the world that are on the List of World Heritage in danger. Hampi might soon be simply the most recent addition to it.