Wall Threatens to Cut Through History 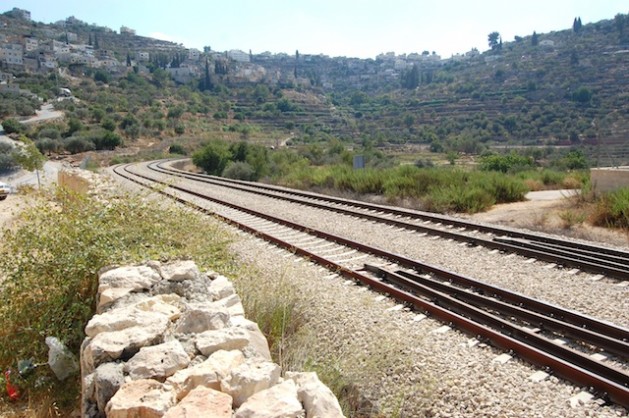 The railway line at the bottom of the historical Battir village. Credit: Jillian Kestler-D’Amours/IPS.

BATTIR, Occupied West Bank, Oct 1 2012 (IPS) - Dating back to the late 1890s, the historical Jaffa-Jerusalem railroad winds in a U-shape at the base of the valley. Olive groves adorn the bottom of one steep hill. Further up the slope, pine trees and an Israeli army patrol road lead westward towards Jerusalem.

On the adjacent hillside, a Roman-era irrigation system feeds picturesque agricultural terraces; olive trees, eggplant, peppers and other vegetables sit among the different levels, around a flowing spring. Dozens of stone houses are tightly squeezed onto the top of the hill, where a steep, winding road links this historical Palestinian village, Battir, to Bethlehem and the rest of the southern West Bank.

“It’s not an issue of land only. It’s more than that; there’s a cultural heritage that exists in the ground,” said 27-year-old Hassan Muammar, a civil engineer and Battir native who works at the Battir Landscape Eco-Museum. “The continuity of landscape and the nature will be affected very much by imposing the wall in this area.”

Israel plans to build a section of its West Bank separation wall through the lands of Battir. About 5,000 Palestinians currently live in the village, which sits just south of Jerusalem in the occupied West Bank. Over 75 percent of Battir is considered Area C, which under the Oslo Accords agreement is under full Israeli military and civil control.

According to village residents, the wall would cut them off from one-third of their farmland, or approximately 3,000 dunams. They are currently fighting Israel’s plan to build the wall through their lands in an Israeli court, and are awaiting a decision.

“This land is very important. It’s mainly olive groves and orchards, which people depend on as one of their resources for their life,” Muammar told IPS.

In mid-September, the Israeli media reported that for the first time, an Israeli state agency expressed opposition to the route of the separation wall. The Israel Nature and Parks Authority (INPA) reportedly withdrew its support due to the damage the wall would cause to the landscape and local wildlife, and to Palestinian residents of Battir.

“No matter how narrow the route of the fence, it will be a foreign engineering element in the heart of the agricultural terraces, and separate the village from its lands among which are plots irrigated by spring water,” the INPA wrote in a letter to the Israeli Defence Ministry, according to Israeli newspaper Ha’aretz.

“It must be protected because the Battir area possesses all the criteria to be a World Heritage site. It has also an urgency because that heritage is under threat,” said Giovanni Fontana Antonelli, culture programme specialist for the UNESCO office in Ramallah.

Palestine was admitted to UNESCO, the UN cultural agency, in November 2011. The Nativity Church – a Bethlehem church where Christians believe Jesus was born – was the first place to be recognised as a Palestinian heritage site, earlier this year.

According to Antonelli, the Palestinian Authority (PA) government in Ramallah is still deciding whether to submit Battir for consideration as a UNESCO World Heritage site. The deadline to apply is Feb. 1 of next year.

“The next three months are critical,” Antonelli told IPS. “The wall will have an irreversible impact (on Battir). But it is possible to prevent this damage through negotiated action for the preservation of these heritage values. This landscape deserves more attention and has unexplored potential.”

Israel began constructing the wall in 2002. Still in construction, it is expected to span over 700 kilometres; 85 percent of its length will be built within the West Bank itself. According to Palestinian human rights group Al Haq, when completed, the wall will annex 530 square kilometres of Palestinian land, equivalent to the area of Chicago, the United States’ third largest city.

In 2004, the International Court of Justice found that the Separation Wall was illegal under international law and advised Israel to stop building it, to compensate Palestinians for damages, and dismantle its existing sections.

This provides little comfort for the residents of Battir, however, who are anxiously waiting to see whether the wall – which would irreversibly alter their traditional agricultural practices and the historical landscape – will indeed be built through their village.

“Ten percent of people depend entirely on agriculture; the rest of the people take agriculture as part-time work. You find a lot of people, in the afternoon after they finish work, coming to cultivate the land,” said resident Hassan Muammar.

“The wall will be something imposed on the landscape. It’s urgent. We have to think about the quality of life.”