Israel Walls Itself In 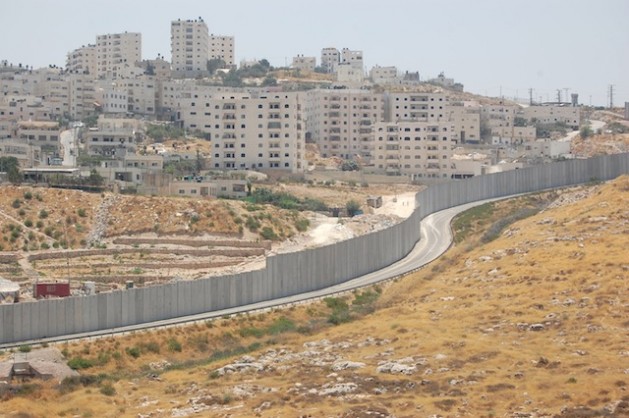 JERUSALEM, Jul 20 2012 (IPS) - As Israel continues to build walls and fences along virtually each of its borders, analysts say the country’s isolationist policies and unwillingness to deal with the Palestinians and other Arab neighbours through anything other than forceful means spells disaster.

“On the one hand we’re walling the Palestinians in but on the other hand if you kind of zoom out and look at the Middle East, you’ll see that Israel is the one that’s walled in. It’s this island that is losing touch with its neighbours,” says Israeli academic and author Neve Gordon.

Israel’s eight-metre high “Separation Barrier” with the West Bank – referred to by most Palestinians as the Apartheid Wall – is now in its tenth year of construction. As of April 2012, 434 kilometres, or almost 62 percent of the total length of the wall, had been completed.

In June, Israel announced that construction would resume on a section of the wall in the Gush Etzion settlement bloc near the West Bank city Bethlehem. Building of the section around Ma’ale Adumim near Jerusalem, one of Israel’s largest settlements, is expected to start next year.

“Whatever is on the other side of the wall is a monster, is an unknown, is something you fear. So it does definitely increase the level of animosity, hate and so forth because it is an unknown and it’s a frightening unknown,” Gordon tells IPS.

The Israeli government promotes the wall as a way to protect Israeli civilians from Palestinian violence. Palestinians say that the wall, which cuts deep into the occupied West Bank, is a means for Israel to seize more Palestinian land.

When finished, the wall is expected to annex 530 square kilometres of Palestinian land, equivalent to the area of Chicago, the United States’ third largest city, according to the Palestinian human rights group Al Haq.

But Israel’s push to erect walls and fences around itself doesn’t end at the Separation Wall; construction of a 230-kilometre fence along Israel’s southern border with Egypt is moving forward at a frantic pace, in an attempt to keep African asylum seekers out.

Ironically, asylum seekers in Israel who now number approximately 60,000 are themselves involved in the building of the fence and its infrastructure. Most of them have reached Israel through the Egyptian Sinai desert.

“I feel like I’m doing something against myself,” says 29-year-old Mohammad Anur Adam, a refugee from Darfur who spent eight months building a road that the Israeli army and police will use to patrol the fence.

“There is no work, that’s why,” Adam tells IPS from his home in Eilat, Israel’s southernmost city, only a few kilometres from the Egyptian border.

Israeli Prime Minister Benjamin Netanyahu says the fence is necessary to maintain peaceful relations with Egypt. “To continue the peace, there must be security and to this end a fence is necessary,” he has said. “Its rapid construction is important for both peace and security.”

Netanyahu announced early this year that once the fence along the Egyptian border is completed, Israel would build one along the Jordanian border.

Even before this announcement, Jordanian King Abdullah II said in interview with the Wall Street Journal in September last year that “Israel has to decide; does it want to be part of the neighbourhood or does it want to be fortress Israel?”

Israeli historian Ilan Pappe says Israel’s “fortress” mentality is nothing new, and is a product of early Zionist thinking.

“The main Zionist and later Israeli impulse was not to be part of the Middle East but to belong to Europe,” Pappe tells IPS in an e-mail interview. “Whether they have real or imaginary enemies in their own state or on the state’s borders, the Israeli Jewish society voluntarily wishes to be gated so as not blend with the ‘primitive’ Palestinian or Arab environment.”

Pappe says the Israeli siege mentality forces the state to deal with its neighbours only through force, which in turn isolates it even more from the larger Middle East.

“Breaking down the real and imaginary walls can only be done when Israel, absurdly the strongest military power in the region, will be courageous enough to give (up) some of its privileges and make Israel and Palestine a more equal state and accept that (it is) part of the Middle East, its problems and solutions.”

In June, the Israeli authorities completed construction of a seven-metre high wall separating the country from Lebanon. The wall equipped with cameras and motion detection sensors covers approximately 1,200 metres.