Dipti Bhatnagar, Climate Justice & Energy Co-coordinator for Friends of the Earth International, and Susann Scherbarth, Climate Justice & Energy Campaigner for Friends of the Earth Europe, argue that the commitments made by the world's governments so far are well below what science and climate justice principles tell us is urgently needed to avoid hitting climate tipping points. 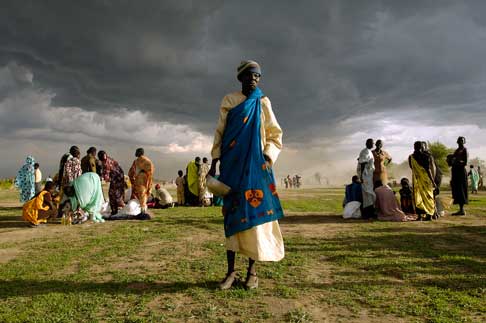 “Poor and rural communities are disproportionately affected by the climate crisis. It is them – who did the least to create this problem – who are suffering the most from it”. Photo credit: UN Photo/Tim McKulka

BRUSSELS/MAPUTO, Apr 1 2015 (IPS) - World governments expect to agree to a new global treaty to combat climate change in Paris in December. As the catastrophic impacts of climate change become more evident, so too escalates the urgency to act.

Mar. 31 should have marked a major milestone on the road to Paris, yet only a handful of countries acted on it. Unfortunately, the few plans that were announced before that date show that our leaders lack the ambition to do what it takes to tackle the climate crisis.

National plans for reduction of greenhouse gas emissions will most likely form the basis of the Paris agreement. These plans – known as Intended Nationally Determined Contributions (INDCs) – are meant to indicate a government’s self-stated commitment to solve the global climate crisis through domestic emission reductions as well as through support for the poorest and most vulnerable countries.

“People on the frontline of climate impacts are burning while governments fiddle. People are paying and will pay for the devastation of climate change with their lives, livelihoods, wellbeing, communities and culture”

This architecture will result in an agreement that is weaker than each country being legally mandated to reduce emissions based on their fair share, determined through science and equity.

Yet, even with this architecture, the idea was that national governments would declare these plans by the end of March so that they could then be scrutinised.

Only six pledges had been received by the United Nations by the deadline – from the European Union, the United States, Norway, Mexico, Russia and Switzerland. These nations, with the notable exception of Mexico, are among the worst historical carbon emitters, yet these pledges do not reflect that immense historical responsibility and do not show any real willingness to address the scale of the climate crisis.

The commitments are well below what science and climate justice principles tell us is urgently needed to avoid hitting climate tipping points. The European Union announced target to cut emissions by ”at least 40 percent below 1990 levels by 2030” is merely re-hashed from last year’s announcement.

The United States has cobbled together a plan for a meagre reduction of 26 to 28 percent below 2005 levels, by 2025. If these insignificant pledges are an indication of what is to come, we are on track to a world which will be 4-6°C warmer on average. To put this into context, the climate impacts we are facing today are the consequence of a planet which is only 0.8°C warmer than it was.

So far, none of these countries’ announcements would contribute their ‘fair share’ according to science and equity. All parties are capable of much greater ambition, and it is high time to bring it to the table.

The deadlines that matter most are not set by governments, but by our planet and its natural boundaries, which have already been stretched considerably by the impacts of the climate crisis, for instance by the lethal and extreme weather events from Vanuatu to the Balkans to the Sahel.

The mockery made of this latest Mar. 31 deadline is just another revelation of our governments’ inaction – under the influence of powerful polluting corporations – in the face of impending disaster.

People on the frontline of climate impacts are burning while governments fiddle. People are paying and will pay for the devastation of climate change with their lives, livelihoods, wellbeing, communities and culture.

Poor and rural communities are disproportionately affected by the climate crisis. It is them – who did the least to create this problem – who are suffering the most from it.

We need a just and drastic transformation of our societies, our energy and food systems, and our economies. Proven and workable alternatives exist and are already being implemented.

Key decisions about our energy systems are made regularly, and will of course be made long after the Paris summit. Take for instance U.S. President Barack Obama’s decision on the controversial Keystone XL pipeline, which would bring planet-wrecking tar sands oil from Canada to the Gulf of Mexico.

A decision is expected soon and a rejection of the pipeline project would send a strong signal that our long-term future is not founded on the exploitation and burning of more and more fossil fuels.

European Union governments announced their INDCs back in February with their new ‘Energy Union’ vision for meeting the region’s energy needs. The bloc has recognised the need to reduce energy consumption and help citizens take control of clean, local renewable sources. But these moves towards the good must not be negated with new investments in the bad – new gas pipelines are also on the menu.

Throughout 2015, Friends of the Earth International and others will be bringing more and more people together to fight against the power of the polluters and make sure politicians hear the voices of the voiceless and take real action.

In the run-up to Paris, and along the road beyond, we, together with thousands of others, will be promoting the wealth of real solutions and proven ideas that are already delivering transformation around the world.

We will be on the streets throughout 2015, in 2016, and as long as it takes to realise community-owned renewable energy solutions that benefit ordinary people, not multinational corporations.

The Paris deadline will come and go, like others before. But the energy transformation is under way and, whatever our governments will pledge or not pledge at the climate summit in Paris, the transformation will not be stopped.

* Dipti Bhatnagar is Climate Justice & Energy Co-coordinator for Friends of the Earth International, based in Maputo.

* Susann Scherbarth is Climate Justice & Energy Campaigner for Friends of the Earth Europe, based in Brussels.