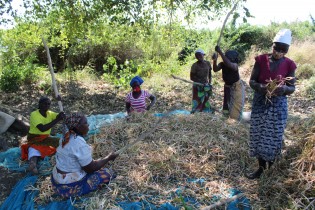 Argentina Will Try to Double Number of Engineering Graduates

By Marcela Valente
An educational stimulus programme launched in Argentina is aimed at doubling the number of engineering graduates by 2021, in an attempt to fulfil unmet growing demand from industry.

OP-ED: Carbon Doxide Emissions on the Rise as the Kyoto Era Fades

By Xing Fu-Bertaux
At the Mauna Loa Observatory in Hawaii, the latest on-site measurements of carbon dioxide in the atmosphere by the Scripps Institute of Oceanography reveal that global atmospheric carbon dioxide (CO2) concentrations reached 391.3 parts per million (ppm) in 2011, up from 388.56 ppm in 2010 and from 280 ppm from pre-industrial times.

By Matthew Charles Cardinale
Until this past February, the last time new nuclear power construction was approved in the United States was in 1978. But when the U.S. Nuclear Regulatory Commission (NRC) approved two proposed nuclear reactors at Plant Vogtle near Augusta, Georgia, on February 9 in a four to one vote, it took less than a week for the legal action to begin.

By Athar Parvaiz
After scientists in Kashmir successfully cloned the pashmina goat, that produces the famous ‘cashmere’ wool, hopes are running high for the revival of the traditional shawl-making industry in this Indian state.

By Katie Lin
As Malawians celebrate Joyce Banda’s appointment as president on sites, like Facebook and Twitter, the increased use of social media in Malawi comes full circle as her new government takes office.
Next Page »
ADVERTISEMENT ADVERTISEMENT