Stories written by Marcela Valente
Marcela Valente has been IPS correspondent in Argentina since 1990, specialising in social and gender issues. She is a history teacher and alternates her correspondent work with teaching journalism at various schools and workshops. At the University of Buenos Aires, she has taught “Introduction to the Study of Society and the State”. Marcela has participated in several courses and workshops on journalism in Costa Rica, Germany, Denmark and Uruguay. She has covered news in Brazil, Ecuador, Uruguay and Sweden. She began her career in 1985 as a contributor for the Argentine newspaper Clarín. She also worked for El Correo de Bilbao (Spain) and the Uruguayan weekly magazine Brecha, among other media. 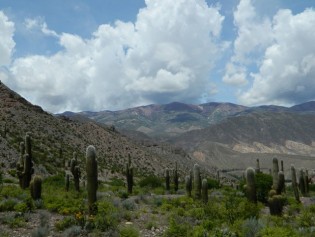 By Marcela Valente
To maintain its trade surplus, Argentina continues to control imports – a strategy that has bolstered its national industry but is questioned by importers, partners in the Mercosur trade bloc, and rich countries.

By Marcela Valente
Disillusioned with an economy that promotes individualism and ruthless consumption, thousands of people in Argentina are giving things away in street markets, organising car pools with strangers or offering free accommodation to travellers from abroad.

By Marcela Valente
Latin America’s cash transfer programmes are a more effective weapon against poverty and social inequality than economic growth alone, according to a study by two Argentine economists.

By Marcela Valente
The native people of Argentina are achieving unprecedented visibility for their demands. However, they are still faced with hurdles to more rapid progress towards their claims.

By Marcela Valente
Despite the enormous distance between the two countries, Argentina has become an increasingly frequent destination for migrants from the Dominican Republic, especially women, who are vulnerable to falling prey to sexual exploitation networks.
Next Page »
ADVERTISEMENT ADVERTISEMENT