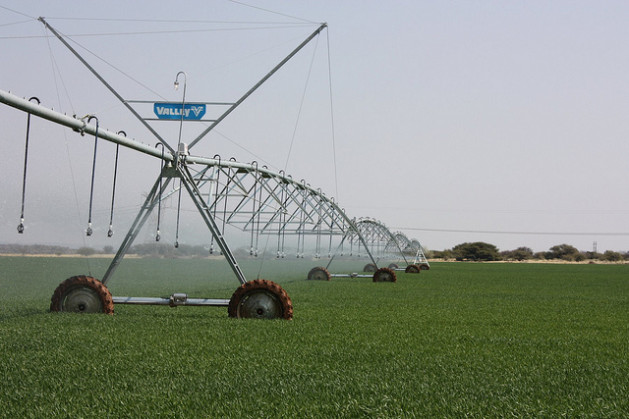 The challenge is to seize the opportunity, without neglecting the needs of a region where there are still 66 million indigents – 11.4 percent of the population – according to the latest figures from the Economic Commission for Latin America and the Caribbean (ECLAC).

Although the international market continues to face difficulties posed by price volatility, speculation and competition for land by biofuels, experts who spoke to IPS were convinced that the region could successfully overcome the challenges.

Rice, grains, oilseeds, fruit, dairy products, meat, cooking oil, wine – it is all produced and exported in large volumes by Latin America, especially in the southern part of the continent, overcoming drought, flooding and other climate change-related meteorological events.

Gino Buzzetti, Inter-American Institute for Cooperation on Agriculture (IICA) representative in Argentina, told IPS that for now there is no global food crisis, like the one in 2007-2008.

But, he said, there is “concern about the medium term” because not only is the population growing, but incomes are rising and demand is becoming more sophisticated. “It’s no longer just about producing rice; we’ll have to produce more meat, which requires greater investment,” he said.

“The potential land for meeting the growing demand is in the temperate tropics, but Africa has neither the development nor the technology, which Latin America, on the other hand, does have, especially in the Southern Cone,” he said.

Buzzetti pointed out that Argentina, Bolivia, Brazil, Chile, Paraguay and Uruguay produce one billion tons a year of grains on 72 million hectares, which represents 10 percent of the world’s agricultural land.

These countries account for 47 percent of the world’s soy production and 28 percent of maize exports, for example.

The region is also a leading global producer of meat: 21 percent of the world’s beef and 17 percent of chicken are produced by these Southern Cone countries, and the area’s meat exports represent a full one-third of global meat exports, the IICA official said.

And whereas Argentina was the undisputed regional leader in beef production a few decades ago, Brazil, Paraguay and Uruguay now surpass this country in volume of production.

But with greater investment and a shift to more feed lots, beef production could rise again, said Vilella, head of the agribusiness and food department in the University of Buenos Aires engineering department.

In fact, it has already begun to recover, he noted. He said Argentina should follow the example of neighbouring Uruguay, which regulates domestic prices of certain cuts of beef for the internal market while exporting the rest at international prices.

With respect to the outlook for the future, Vilella told IPS that by 2030, Asia could be producing 75 to 82 percent of its own food, sub-Saharan Africa only 15 percent, and North Africa and the Middle East 85 percent.

“The remaining demand will have to be met by South America, the United States, Canada, Australia, New Zealand and Ukraine, which will have to feed a market of some three billion people,” he said.

“The role of Argentina and Brazil will be very important,” he said. The biggest challenge will be to boost productivity per hectare, because there is very little room for expansion of the world’s arable land, the expert said.

Vilella said production by direct seeding or zero tillage, which is widely used in soy cultivation in Argentina, is key, because is it the most efficient method, “as long as it is done on the best land” to avoid environmental deterioration.

With respect to competition from biofuels, Buzzetti said conflict occurs when food crops are diverted to the energy market, like what is happening in the United States with maize used to produce ethanol.

“Production has to shift towards second-generation biofuels, which use non-food biomass,” he said.

But besides the practical challenges, Buzzetti said the ethical problem of hunger in a world where more than enough food is produced has to be discussed, and measures of international consensus are needed to address the issue.

“At Rio+20 (2012 United Nations Conference on Sustainable Development), the need to move towards an economic model that ensures better distribution of income was discussed, and the issue was taken up again at the G20 summit (of industrialised and emerging powers) and in World Bank appeals,” he said.

“We have to come up with a capitalist development model that provides for better distribution of income and food, to make the global system more sustainable and balanced,” he said.

To achieve this, there are recommendations that focus on reducing volatility of prices, which have been on the rise in recent years, and to curb financial speculation in food markets – but these processes take time, he said.

The sources consulted concurred that it is inconceivable that there are countries in the region where hunger is still a problem. Some, like Mexico and countries in Central America and the Caribbean, depend on food imports.

“Between 1999 and 2009, the number of net food importer countries in the region grew from 11 to 16,” Antonio Hill, a Colombian expert in agriculture and climate change with Oxfam, told IPS.

Hill said Latin America has a greater responsibility as a food producer because while it must increase productivity, at the same time it must “reduce levels of inequality, food insecurity and the ecological footprint.”

The most sensible thing “would be to increase productivity, expanding support for family agriculture, especially for rural women, to ensure greater availability of food for the poor,” he said.