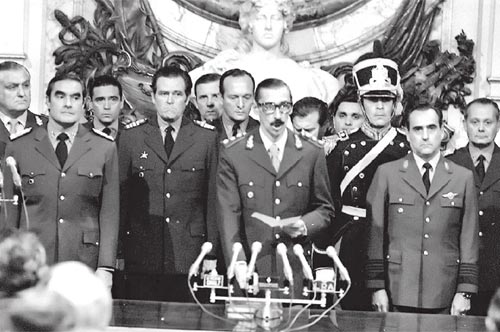 Jorge Rafael Videla swears in as the head of the military junta on Mar. 24, 1976. Credit: Public Domain

BUENOS AIRES, May 17 2013 (IPS) - Thirty-seven years after leading the coup d’etat that ushered in the most brutal dictatorship in the history of Argentina, former army commander Jorge Rafael Videla died in a common prison Friday.

Convicted in several cases for crimes against humanity, the former dictator was found in his cell without a pulse, according to the medical report from the Federal Penitentiary Service. He was 87 years old.

Videla was serving several sentences in the Complejo Penitenciario Federal Número 2 in the city of Marcos Paz in the eastern province of Buenos Aires, in a section of the prison where he was held with dozens of other human rights violators from the 1976-1983 dictatorship.

“I never killed anyone,” Videla stated. In every conviction against him he was found to be the “intellectual author” of crimes against humanity. He himself admitted as much in the book “The Dictator” by journalists María Seoane and Vicente Muleiro. “There was no lack of control. I was above everyone,” he told the writers.

Human rights groups, the families of victims and observers of the fight against impunity for the de facto regime’s crimes said Videla’s death in a common prison was a powerful symbol, but did not represent the end of a cycle and was merely one more landmark in the process.

The executive director of Amnesty International in Argentina, Mariela Belski, told IPS that Videla “will be remembered for the (dictatorship’s) most brutal and appalling excesses.”

“But the most important thing here is that justice was done, Videla was convicted, and he died in prison,” she said, stressing that Argentina “took a major stride forward in bringing these crimes to trial, and became a model for the region and for the global South.”

But Belski warned that the death of the dictator “does not bring the process to a close. This is an ongoing process, which Argentina is spearheading, but which must continue in the country and in the region.”

“Ten years ago this was unthinkable. Today it is the result of a process of regional scope, a process that is moving forward at different speeds, under different laws, but is generating very interesting debates throughout Latin America,” said the representative of the bloc made up of Argentina, Brazil, Paraguay, Uruguay and Venezuela.

Abramovich, a former vice president of the Inter-American Commission on Human Rights, said the fact that the former dictator died in a common jail “reaffirms the principle of equality before the law.”

“This process, which is moving ahead at varying rates, is occurring in Chile, Brazil, Peru, Colombia and Uruguay, as well as Guatemala, where (former dictator José Efraín) Ríos Montt was sentenced to 80 years in prison (on May 10),” he said.

In Argentina, 422 human rights violators, mainly members of the military, have been tried since 1983. Of that total, 378 were convicted and 44 acquitted, according to the prosecution unit for the coordination and monitoring of cases involving human rights violations.

In the last two years, trials have picked up speed, thanks to measures such as the accumulation of cases committed in each torture centre. In 2012, 24 trials ended in 134 convictions and 17 acquittals.

As part of the fight against impunity, the organisation Grandmothers of Plaza de Mayo has managed to identify more than 100 sons and daughters of political prisoners who had been kidnapped as children along with their parents or were born in captivity.

Some of those stolen children now hold public posts – as national legislators, city councillors or executive branch officials, like the secretary of human rights, Martín Fresneda.

In 1976, then army chief Videla led the junta made up of the commanders of the three military forces after the coup that overthrew the democratic government of Isabel Perón.

Under his leadership (1976-1981), thousands of people were kidnapped, tortured, killed and forcibly disappeared. Government records that are gradually being updated account for more than 11,000 victims of forced disappearance, while human rights organisations put the total number at 30,000.

When the regime collapsed in 1983, the former junta members were tried. In 1985, Videla was sentenced to life in prison for 66 murders, 306 kidnappings, 93 cases of torture and 26 cases of theft.

He spent five years in a military prison along with other officers, enjoying privileges that were denounced by the media and human rights groups. But in 1990 they were pardoned by then president Carlos Menem (1989-1999).

However, Videla was arrested again in 1998 in connection with the theft of children born to political prisoners – a crime he had never been convicted of and thus was never pardoned for.

But it was the declaration of the presidential pardon and the two late 1980s amnesty laws as unconstitutional that reactivated a number of human rights cases against him over the last decade. In 2010 he was handed a live sentence for crimes committed in the central province of Córdoba and in 2012 he was sentenced to 50 years for the theft of children.

He was also tried for crimes against humanity committed by the regime in the central province of Santa Fe and the northern province of Tucumán.

In the trials, Videla did not recognise the authority of the civilian courts to try him, and complained that he was a “political prisoner.”

He did so once again on Tuesday May 14, in another case related to Operation Condor, a coordinated plan among the military governments that ruled Argentina, Bolivia, Brazil, Chile, Paraguay and Uruguay in the 1970s and 1980s, aimed at tracking down, capturing, exchanging and eliminating left-wing opponents.

On his last appearance in court he looked unwell, with difficulty walking and a trembling voice.

But he never repented in public. On the contrary, he said he gave the orders for the crimes committed by his subordinates.

In his last statements to the press, to the Spanish magazine Cambio 16 in March, he urged young officers to rise up against the government of Cristina Fernández “in defence of the institutions of the republic.”