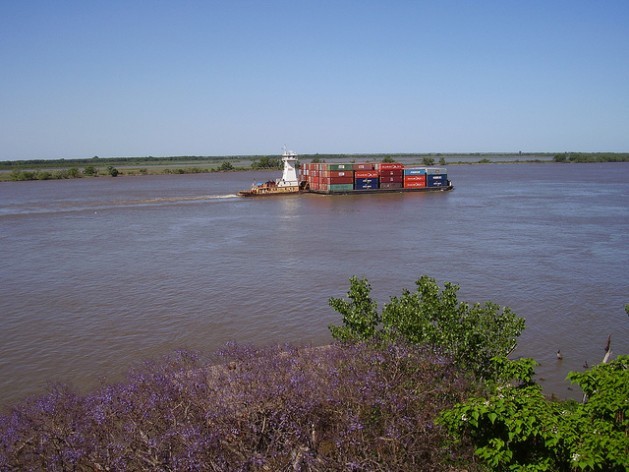 BUENOS AIRES, Sep 16 2013 (IPS) - To maintain its trade surplus, Argentina continues to control imports – a strategy that has bolstered its national industry but is questioned by importers, partners in the Mercosur trade bloc, and rich countries.

“What we have in Argentina today is a war to protect employment, which is why trade has to be managed,” textile businessman Marco Meloni told IPS by phone from Italy, where he was selling his shirts under the “Premium” trademark.

“It’s not that we aren’t importing; quite the opposite. We’re much better clients for the world than we were 10 years ago. But we have to be careful with Asia’s global super-production,” he said.

He said that in his travels abroad to sell his products, he constantly runs into shirts manufactured at very low cost in Asia.

“My shirts are competitive in the United States, Canada, Mexico, Brazil, Portugal and Spain,” Meloni said.

But in many of those countries he does not compete with local industry but with the flood of low-cost merchandise from China or Bangladesh.

“Shirts made with slave labour cost less than half,” he complained.

Meloni, who is president of the textile association Fundación Pro Tejer, added that a worker in a textile factory in Argentina earns around 1,400 dollars a month and costs the company 1,800 with the payments to social security, etc. In other countries the cost can be 40 times lower, he said.

A lack of access to international financing since the late 2001 massive debt default and the loss of monetary reserves led the centre-left government of Cristina Fernández to adopt measures designed to maintain a favourable balance of trade.

Argentina’s foreign reserves shrank from 52.6 billion dollars in January 2011 – a historical peak – to just over 36 billion today, according to the Central Bank.

When Néstor Kirchner – President Fernández’s husband and predecessor, who died in 2010 – first took office in May 2003, foreign reserves stood at less than 12 billion dollars.

So far Fernández has managed to maintain a positive trade balance by restricting imports and the sale of dollars.

For some importers, the alternative accepted by the authorities is to compensate imports with exports. That is how growing agreements between producers were reached to, for example, export wine in exchange for importing motorcycle parts.

Argentina’s efforts to maintain the balance between exports and imports have drawn complaints from the EU. On Sep. 2, the European Commission – the EU executive – issued a report putting Argentina in first place among emerging economies in terms of protectionist policies.

Protests have also come from the United States and from Argentina’s partners in the Mercosur (Southern Common Market) trade bloc, especially Uruguay and Brazil.

Argentina has responded to such complaints with similar protests against barriers to its sales of beef and lemons to the United States and hurdles to its biodiesel exports to the EU.

But the Fernández administration’s trade policies have drawn complaints both within and outside Argentina.

Importers complain about the red tape involved in filling out a mandatory “anticipated sworn declaration of imports”, which must be approved by the government.

“Without access to external finance, and without a significant influx of foreign investment, Argentina needs a strong trade surplus, which translates into strict import controls,” economist Mauricio Claveri, coordinator of foreign trade in the Abeceb consultancy, told IPS.

In the past, trade restrictions focused on sensitive sectors, in order to boost reindustrialisation. But this policy now has “a double role to play,” he said.

On one hand, it protects certain industries. But it regulates imports, above all, he said. This country has to meet debt service payments in dollars and is not allowed to issue new bonds, due to the late 2001 default.

The regulations are good for companies that produce for the domestic market, said Claveri. But they do not help attract investment from multinational corporations, which worry about being unable to import inputs, he added.

This policy, which the Foreign Trade Secretariat itself describes as temporary because of Argentina’s obligations under the World Trade Organisation, generates uncertainty. “A lot of thought goes into any decision to increase scale of production,” Claveri said.

But it also benefits sectors that are protected from cheap imports, such as the toy, footwear, textile, machinery and tool industries, he acknowledged.

Meloni admitted that there were difficulties in purchasing machinery abroad, and said exporters were forced to compensate for the purchases with exports. But he stressed that the number of workers in his textile company has grown from 30 in 2002 to 120 today.

Economist Ariel Schale, an adviser to the Fundación Pro Tejer, explained to IPS that, thanks to Argentina’s trade policies, the local textile industry saw its exports grow fourfold over the past decade.

Schale noted that production doubled in the last 10 years, and that the total number of people employed by the industry rose from 240,000 in 2002 to the current 400,000. “And we have done that by importing fabric and machinery, because the entry of merchandise is not blocked,” he said.

Another sector that has grown in these conditions is the motorcycle industry. In 2002, some 30,000 motorcycles were sold in Argentina, many of them imported, compared to 800,000 sold this year, all manufactured here.

“They are assembled in this country, but they contain only 30 percent nationally-made parts,” the executive director of the Argentine chamber of motorcycles, Daniel Tigani, told IPS.

Tigani, who defends the protective measures, said business representatives meet every three months with authorities from the Foreign Trade Secretariat to establish what can be imported. He added that other government agencies also take part in these decisions, to keep domestic prices from skyrocketing.

“Imports don’t generate jobs; local production does,” he underlined. “And that doesn’t mean we don’t import, because most of the motorcycle parts are purchased abroad. In 2012, more than 650,000 were sold, and this year the number will grow 20 percent.”

Tigani also pointed out that in 2003 there was virtually no local manufacturing of bicycles. But safety standards similar to those of developed countries were adopted, so this aspect can no longer be cited as a hurdle to trade.

“That revived the industry,” he said. “Today one million bicycles are sold in this country, and only two percent of them are imports.”

Some 3,000 direct jobs were created in the bicycle industry, he said. And if the parts market is included, the benefits reach around 15,000 families engaged in small businesses, he added.