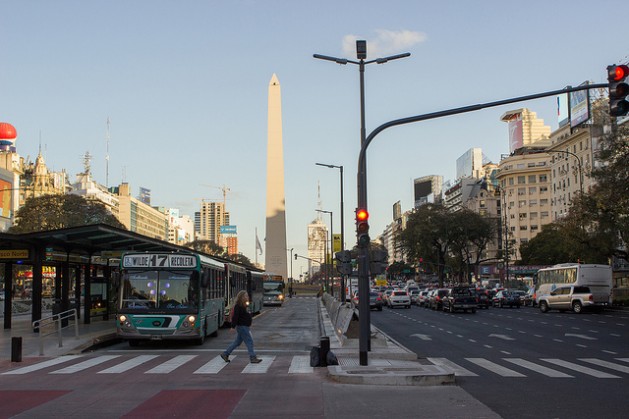 BUENOS AIRES, Aug 27 2013 (IPS) - A new system of exclusive lanes for bus rapid transit appears to be benefiting public transport passengers and bus drivers in the most congested part of the centre of the Argentine capital.

Although there are as yet no studies on its impact, users interviewed by IPS said the new Metrobus on 9 de Julio Avenue, the second widest thoroughfare in the world at 140 metres and 14 lanes wide, delivers faster journeys, with fewer stops and for the same fare.

Built in just six months, the system of exclusive lanes and stops for 10 bus lines began to operate on Jul. 24. The project was controversial because it involved removing small plazas and transplanting nearly 1,500 trees.

Critics claimed that quick journeys over that stretch were already available on the subway, which meant the Metrobus was redundant.

The bus rapid transit (BRT) corridor is 3.5 km long, stretching from the ground-level railway stations of Retiro, north of the city, and Constitución, to the south, which connect with the subway lines.

But the Government of the City of Buenos Aires, the national Transport Secretariat and the Institute for Transportation and Development Policy (ITDP, an NGO) stress that different groups of people use each of these systems.

A survey by the Transport Secretariat found that 89 percent of people who travel in the metropolitan area make their journey as a single stretch. And those who choose the cheapest option say the Metrobus is “all gain.”

They arrive in the city centre by bus, from their urban neighbourhoods or from the suburbs, and remain on board the same vehicle until reaching their destination.

Previously they had to endure a slow, stop-and-start trip across the city centre if they wanted to avoid transferring to the subway for the short journey to the final station, which would make the trip more expensive.

Now the 10 bus lines run down the centre of the avenue, carrying around 200,000 passengers a day. The narrow side streets have been cleared of bus traffic and are in the process of being pedestrianised, and air pollution has been reduced.

Braking and acceleration have been minimised, increasing fuel efficiency and generating lower volumes of the greenhouse gases that are responsible for global warming.

When IPS rode one of the bus lines, passengers and drivers agreed that the system inaugurated in July is faster. Some people said their travel times were halved.

“It used to take me an hour to get downtown from my home, and now it takes just over 30 minutes,” said a passenger, pointing out that previously, her bus travelled along the most congested part of the avenue, and now it drives in the fastest lane, “all without a fare increase.”

Two other passengers travelling the full distance from Retiro to Constitución said the trip previously took 45 minutes and now only 15. “But you have to look sharp, because now it doesn’t stop so frequently, it’s like the subway,” one of them said.

In effect, the system is similar to trains. Buses go along a single lane and only stop every 400 or 700 metres, at raised platforms level with the bus floor. If they do not need to stop, they travel freely in their exclusive lane, with no taxis or cars in the way.

“It’s much better for us,” one of the line 67 bus drivers told IPS. “On one occasion it took me an hour and 15 minutes to get from Constitución to Corrientes avenue, but now I always do it in 15 minutes.”

Andrés Fingeret, the head of ITDP Argentina, told IPS that while it is too soon to evaluate the results, so far the response received is that “for the vast majority of the travelling public, it has been positive.”

“Not just for passengers, who save time and have a more enjoyable travel experience, but also for bus drivers and for cars and taxis, who experience relief because the streets are less congested,” he said.

Fingeret emphasised that building bus rapid transit networks costs 10 percent of what it would cost to build equivalent subways. He also said they are very effective and can be set in motion much more quickly. For example, the 9 de Julio system was established in just six months, he said.

“One kilometre of subway costs around 250 million dollars and the same distance of Metrobus costs between eight and 15 million dollars, for a much more sophisticated system than was installed in Buenos Aires,” he said.

BRT systems have spread around the world and can be found in over 150 cities, the Buenos Aires city government reported.

In Latin America, the pioneers were Curitiba in Brazil, and Bogotá in Colombia. With variations, the system has also been introduced in Santiago, Chile and in Mexico City.

In Buenos Aires, the first BRT network was constructed in 2011 on Juan B. Justo avenue, comprising a 12-km corridor between the neighbourhoods of Liniers and Palermo, two public transport hubs for buses and trains.

This bus corridor reduced travel times by 40 percent, according to the city transport under-secretariat. And after the 9 de Julio system was installed, a third network came into operation this month between Constitución and Puente La Noria, in the south of the city, over a distance of 24 km.

“It’s a system that offers a lot of advantages and that could still grow ten-fold in Buenos Aires. In fact, the city government is carrying out feasibility studies on further corridors,” said Fingeret.

However, he thinks the network has room for improvement. “There’s a lot to be done to improve integration with other services, such as the subway, trains or bicycles,” he said.

He also thinks better services could be provided for passengers at the bus stops. The stops have seats, roofs and lighting, but they could also have ticket offices, information, sales of soft drinks or cellphone recharging facilities, Fingeret said.