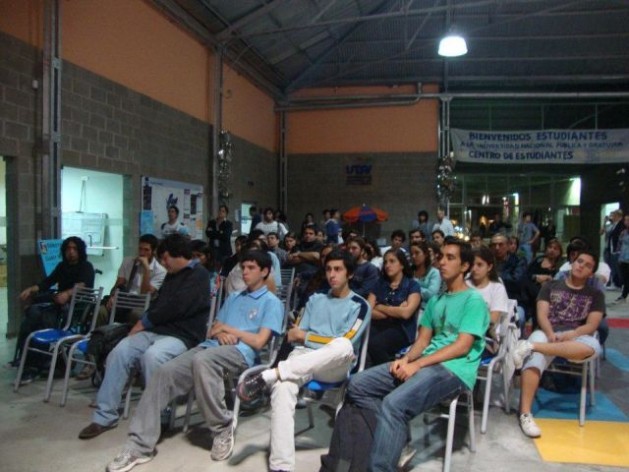 Jul 22 2013 (IPS) - Nine of the 47 tuition-free public universities in Argentina were created in the last decade, with the aim of improving access to higher education in low-income areas. But despite the expansion and strategies to provide support for students, the drop-out rate has proven difficult to combat.

One result of this policy of inclusiveness is that “80 percent of new students (in the new universities) are the first generation in their family to attend university,” Martín Gill, secretary of university policies at the Education Ministry, told IPS.

Five of the new universities are located in Avellaneda, José C. Paz, Merlo, Moreno and Florencio Varela, which are among the most populous districts with the highest number of working-class households and the lowest incomes in the poor suburbs surrounding Buenos Aires.

The other four founded in the last 10 years, during the centre-left administrations of the late Néstor Kirchner (2003-2007) and his wife and successor President Cristina Fernández, are in the provinces of Chaco (northeast), Río Negro (south), San Luis (west-central) and Tierra del Fuego (far south), where previously there had been no public universities.

“University education is a right and the state must guarantee it,” said Gill.

The government is offering more living expenses scholarships to complement this policy, Gill said. “Although our public universities are free, for too long only better-off students who lived close by could benefit,” he said.

The total number of state scholarships for students from low-income families increased from 2,000 in 2003 to 47,000 in 2013, and half of them currently go to students who have chosen one of 200 scientific and technological degrees prioritised by Argentina’s development programme.

Gill said the new universities on the outskirts of Buenos Aires “are small, flexible units” that have a strong local identity while maintaining high standards of educational quality.

He also highlighted research work at Quilmes National University, created before 2003 but part of the educational expansion plan. Scientists there, working with researchers at other schools in Argentina and in Cuba, have developed a therapeutic vaccine for lung cancer, which will be available from this July to treat patients in addition to radiotherapy and chemotherapy.

Gill said that when the policy was launched to open public universities in the poor suburbs known as the “Conurbano”, the idea was to decentralise the University of Buenos Aires (UBA), founded in the capital city in 1821.

While UBA has maintained its enrolment of over 300,000 students because of its high national and international prestige, the new universities and campuses on the outskirts of the city enrolled 67,000 young people this year. “It’s a policy that generates pronounced upward social mobility,” Gill said.

According to the Education Ministry, student enrolment at the country’s universities rose 28 percent in the last 10 years, while the number of students graduating climbed 68 percent. Public spending on higher education increased from 0.5 to 1.02 percent of GDP in the same period, and between 2001 and 2010, while the population grew 10 percent, the number of people with higher education rose by 54 percent.

This South American country of more than 40 million people devotes 6.5 percent of GDP to education, the highest proportion alongside Brazil in Latin America after Cuba, which spends over 12 percent of GDP on education, according to data from 2010 published by the United Nations Educational, Scientific and Cultural Organisation (UNESCO).

Jorge Calzoni, an engineer who is president of Avellaneda National University, told IPS that over 6,000 students have enrolled since the university was created in 2009, including some 300 foreigners.

The university offers two-year programmes, vocational-technical studies, bachelor’s degrees and graduate studies in 25 different subject areas. “We were not created to compete with the large universities, but to complement them,” Calzoni said.

As a result, instead of offering medical studies, which are taught at nearby universities, Avellaneda National University offers vocational studies and undergraduate degrees in nursing, for instance. It also has courses in tourism, sports and recreation, computer engineering and design, among others.

But Calzoni said drop-out rates remained high, in spite of the three catch-up seminars taught to new students “to bring them up to an acceptable level to prevent failure in the first year.” Students are also given support by tutors and teaching assistants.

“Even so, 47 percent drop out,” he said. “Half of the students who enrol do not come back for the second semester.” He said, however, that some of them change subjects or universities, while others return later.

Avellaneda University’s entrance course includes a survey which found that 84 percent of new students are from families where the parents did not attend university – in other words, they are the first generation to attain higher education.

Calzoni said the new university was located in an area with unmet demand, as shown by the age of the students. The first year it opened, the average age was 34.

“These students had not been able to access higher education previously, and now they saw an opportunity, perhaps because of location.” The average age declined gradually to 28, and now to 24, he said.

Gill also emphasised that the policy of inclusion allowed the hearing impaired and other people with disabilities to become students, along with large numbers of young people from other Latin American countries.

“They come from Bolivia, Chile, Colombia, Ecuador, Mexico and Peru,” he said. “Argentina has a model of higher education with unparalleled access.

“Eighty percent of university students in the country are at public universities,” said Gill.

But he noted that there are also 49 private universities around the country, which offer a great variety of courses.