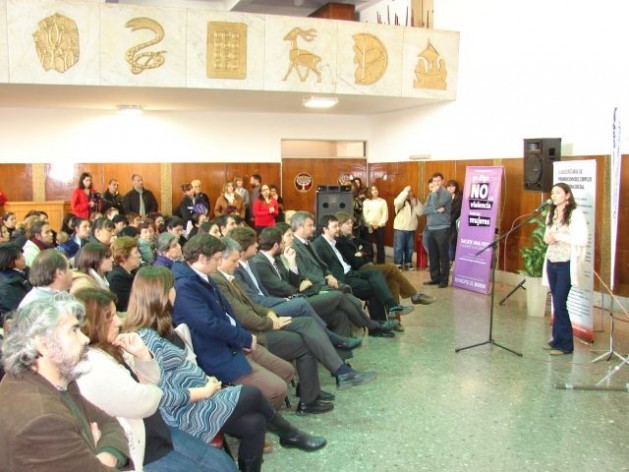 Participants in Ellas Hacen share their experiences in the programme. Courtesy of Social Income with Work Programme in Morón

BUENOS AIRES, Aug 12 2013 (IPS) - A new social programme launched by the Argentine government to fight hard-core poverty is providing unemployed mothers who are heads of households with education, training, work and an income.

“I told my oldest kids that they have to help me now because every morning I have to go to ‘Ellas Hacen’,” said Isabel Hernández, whose five children range in age from six to 16.

Ellas Hacen is the name of the latest Social Income with Work Programme implemented by the Ministry of Social Development. It specifically targets low-income unemployed women with at least three children, or a disabled child, who live in the poorest neighbourhoods.

Although she is taking part in the programme, Hernández still continues to collect used clothing to dress her children or to sell at low prices in her neighbourhood. But now she only does it on the weekends, because she is busy Monday through Friday in Ellas Hacen.

Up to now Hernández, who lives in a poor section of Don Torcuato, a neighbourhood on the outskirts of Buenos Aires, has been doing odd jobs in the informal economy, while drawing the Universal Child Allowance (AUH).

The AUH is a cash transfer to parents who are unemployed or work in the informal sector of the economy. The allowance is conditional on school attendance and keeping up-to-date on vaccines and medical checkups. The programme, introduced by President Cristina Fernández in 2009, expanded the child allowance already received by formal sector workers.

The AUH currently amounts to 460 pesos (83 dollars) a month per child under 18 and 1,500 pesos (272 dollars) per disabled son or daughter of any age. Expectant mothers also receive the allowance, starting in the third month of pregnancy.

But the AUH programme, which now benefits 3.5 million poor children and adolescents in this country of 41 million people, is little more than a palliative in the case of mothers raising several children on their own, with no other source of income and unable to find a job because of a lack of formal education and training.

Ellas Hacen was launched in the middle of this year to reach these women, estimated to number around 100,000 across the country.

The beneficiaries receive 2,000 pesos (363 dollars) a month, on top of the AUH allowance that makes sure their children stay in school.

By registering in Ellas Hacen, the women become part of the social security system and payments are made towards a future pension. In addition, they and their families have the right to medical insurance known as “obra social” – a pay-as-you-go system based on compulsory payments by both employers and employees.

Thanks to the AUH and Ellas Hacen, the Hernández family is now above the poverty line.

The latest figures from the National Statistics and Census Institute indicate that 5.4 percent of the population is living in poverty and 1.5 percent in extreme poverty. But independent sources put the figure higher. The private Catholic University, for instance, estimated the poverty rate at 15.5 percent in July.

In exchange for the new income – Hernández has already received one paycheck – the women must attend daily literacy courses and finish primary or secondary school, depending on each specific case.

The programme also provides training for jobs in urban infrastructure works in shantytowns, the installation of water pipes and tanks, house painting, trash collection and separation, and the care of green spaces.

“We are also organising workshops on gender violence, and we are going to put a strong emphasis on the question of sexual and reproductive health and the care of children,” said Diego Landechea, social-labour director of the Social Income with Work Programme in Morón, another neighbourhood on the outskirts of the capital.

Landechea told IPS that 755 women between the ages of 18 and 62 had registered for Ellas Hacen so far in that neighbourhood, and that 70 percent already receive the AUH.

The others meet different eligibility criteria. For example, over 200 of them are victims of gender violence, while 15 have at least one disabled child, he added.

The group that registered in Morón includes five illiterate women, 80 who did not complete primary school, and 190 who did not finish their secondary studies.

“They never managed to enter the labour market, for different reasons,” said Landechea.

“Without a doubt, raising several children on their own is a fundamental factor in their exclusion from the formal market,” he said, although he also mentioned a lack of formal studies or training.

A census is carried out among the women who register, and commissions are created according to the most pressing needs found.

The first priority is to finish their studies. To that end, courses are offered at different times of day, to make it possible for them to attend class. Attendance is important: if they miss more than a certain number of classes, 350 of the 2,000 pesos (363 dollars) are discounted.

Hernández told IPS that she had finished primary school, and is now starting secondary school, through the programme. She knows she’ll have to get organised, because while she’s gone, the younger children will be left in the care of her 16-year-old son.

“The first thing I did when I got the 2,000 pesos was pay 900 that I owed in the local grocery shop and give my oldest son 300 pesos so he could buy some pants,” she said, adding that the idea was to encourage her son to give her a hand.

Up to now, the Social Income with Work Programme benefited 500,000 people who learned skills and trades and joined cooperatives, where they earn 2,000 pesos a month from the state until the cooperative becomes independent.

But although the programme was not exclusively for men, it has mainly served them because it has failed to take into account specific hurdles faced by mothers who are on their own, raising at least three young children, in slum neighbourhoods.

The social programmes that began to appear after the late Néstor Kirchner (1950-2010) took office in 2003 and that were continued by his widow, President Fernández, have drawn criticism from opposition political and labour leaders.

One of them is Hugo Moyano, the head of the Confederación General del Trabajo, Argentina’s largest trade union confederation, who quipped that the programmes were “take it easy plans” rather than work plans.

Moyano, who represents the faction of the labour movement most critical of the centre-left Fernández administration, made that comment in a July rally, where he called for the elimination of income tax, which affects the middle and upper classes.

The leaders of the Confederación Nacional de Cooperativas de Trabajo (CNCT), the national confederation of workers’ cooperatives, which was created under the Social Income with Work Programme, issued a statement accusing Moyano of slander.

The CNCT pointed out that in the past few years, the programme that has now incorporated women has enabled tens of thousands of people who were out of work to receive training and improve the living conditions in their communities.

The CNCT said the new cooperative members who organised thanks initially to public subsidies are now working in areas like public works, the textile industry, carpentry, transport, gastronomy and communication.