BUENOS AIRES, Aug 4 2011 (IPS) - The endeavour gave a deeper meaning to her life and turned her into an internationally recognised community organiser. Nevertheless, the real wish of Margarita Barrientos is that there would be more need for soup kitchens for the hungry, like the one she founded in the capital of Argentina. 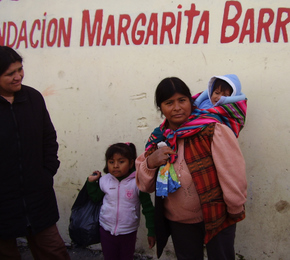 “This shouldn’t have to exist,” Barrientos told IPS at the Los Piletones soup kitchen, which she runs. “What there should be is decent work, so that every man and woman could go out and earn a living. But until that is possible, we’ll have to keep this going.”

The soup kitchen and the rest of the installations of the Margarita Barrientos Foundation are in Villa Soldati, a poor district in the south of Buenos Aires where the Los Piletones slum is located. The Foundation is reached by pitted, muddy dirt roads full of piles of garbage.

The 49-year-old Barrientos came to Buenos Aires alone when she was just 11 years old, from the northern province of Santiago del Estero where she was born into a Toba indigenous family. In the city she lived and worked on the streets and often went hungry. When she was 14 she met the man who is now her husband. They have 12 children – 10 biological sons and daughters and two children “of my heart,” she says.

In 1996, in response to the hunger and dire poverty she saw around her, Barrientos starting distributing among her neighbours leftover bread and baked goods that a bakery donated to her husband along his daily route collecting cardboard and other waste products to sell for recycling.

Since she opened her soup kitchen, Margarita Barrientos has received 40 prizes and honours from the city, non-governmental organisations, and different churches, as an "exemplary citizen", "woman of the year", or "distinguished citizen."

Mauricio Macri, the centre-right mayor of Buenos Aires who was re-elected Sunday Jul. 31, invited her to run as a candidate for the national legislature in the October elections – a post she would stand a real chance of winning. But she was not tempted.

"I turned him down immediately," she says. "I never thought about going into politics. That's just not me. I believe in the people who help me with donations to keep this going, and they believe in me. If I were to accept a political position, I would be letting them down."

Barrientos only made it to third grade. Her husband is disabled – he lost one of his arms in an accident – one of their sons has a drug abuse problem, her family lives in Los Piletones, and she faces nearly all the same difficulties as the people she helps.

"You often feel discouraged. Living in the slum isn't easy. But with hard work and sacrifices, you can do anything in life," says Barrientos, who was named as one of the "women who change the world" by the Spanish NGO Mundo Cooperante.


Within a short time, she was cooking whatever she and her husband managed to scrounge up, for 15 people from the neighbourhood. But her budding project grew, and today 30 women work alongside her, providing cooked meals to 1,600 people a day, including 1,000 children, and offering other services as well.

The Buenos Aires and Argentine governments supply part of the food, and the rest is covered by private donations: of food, mattresses, clothing, blankets, furniture, computers, books, building materials and medicine.

“Los Piletones” serves breakfast, lunch and dinner, but most of the guests don’t eat there – they show up at the specified time and pick up pots or plastic bowls of food, which they take home to their families.

One woman standing in line with her four young children tells IPS that they are from Paraguay, and that her husband found a job and she was able to register their kids in school but that they do not yet have legal residency papers. She stays home to raise the kids, she says.

In the kitchen, three huge pots are steaming. A young woman stands on a high stool to stir the food with a large wooden paddle, using both hands. Other women are busy cutting up chicken, peeling potatoes, or mopping the floor.

According to the National Institute of Statistics and Census, 9.9 percent of Argentina’s 40 million people live in poverty, and 2.5 percent in extreme poverty. But trade unions and other independent bodies say the poverty rate is at least twice that high.

Across the street from the soup kitchen are the Foundation’s other installations: a health centre that offers dental services, medical checkups, and gynaecological and pediatric services, and a well-stocked pharmacy.

“People can pick up condoms here without asking,” Barrientos says, pointing to a box in the waiting room. The nurse is a volunteer, and the doctors serve the Foundation through an agreement with two private universities.

There is also a pasta factory and a day care centre for children between the ages of seven months and five years. The nine teachers are paid by the city government, and the cook and cleaning woman are local volunteers.

Many of the children are raised by mothers on their own, some of whom work outside the home. “Women have the resiliency to handle things on our own,” Barrientos says, laughing.

Next door is the library, computer room, and day centre and dining room for the elderly, which has a knitting corner and large TV set that is turned on but has no picture. “They cut off our cable service because we were behind on the bills, but now we’re all caught up and I don’t know why they haven’t come to connect it again,” she says, apologising to the people there.

Raúl Cabrera, 58, comes every day from González Catán, ten train stations away on the outskirts of Buenos Aires. “I’ve been coming for eight years. I have lunch and take dinner home with me,” he tells IPS.

He has seven grown-up children, and takes advantage of his day trips to Villa Soldati to visit the ones who live in this neighbourhood. Cabrera, who lives alone, manages to earn a few coins fixing bicycles.

“Food is so expensive. One kilo of bread costs 12 pesos (three dollars) now, and a kilo of beef is 30 pesos (seven dollars),” Cabrera says. He worked in the construction industry and as a garbage picker collecting and selling cardboard. Now he has neither a job nor a pension.

Barrientos says the Universal Child Allowance (AUH) has done a great deal to improve conditions for poor families in the area.

The AUH is a monthly cash transfer from the government that covers children up to the age of 18 of unemployed parents and informal sector workers, rural workers and domestics with incomes below the minimum monthly wage. The allowance is around 55 dollars per child, up to a maximum of five children, and is conditional on school attendance and up-to-date vaccinations.

But Barrientos does not see cash transfers as an effective tool, in the long run. “Nearly all of the people who come to the soup kitchen receive the AUH and take food home, but if they get everything for free, they won’t understand what it means to make sacrifices and they won’t have incentives to work,” she argues.

She says this despite the fact that her Foundation asks for nothing in exchange for the assistance and services it offers. “A pregnant 15-year-old, who already receives the AUH for herself – why would she think of working?” she comments.

But the 30 women who help Barrientos run the soup kitchen clearly know the value of hard work. Although they do not receive cash wages, they benefit broadly from the donations.

“Women are much more socially-oriented than men, who won’t work if they aren’t paid. Women like to take things on their shoulders and bring food home, and help their communities. These women are an example,” she says, visibly moved.

One of the soup kitchen workers is Isabel Benítez, a 38-year-old widowed mother of four. When her husband was in the hospital and her family was barely surviving, her oldest daughter came here every day to pick up meals for the whole family.

“I didn’t know Margarita, but my daughter brought home meals, blankets, mattresses. We didn’t have anything, not even food. One day my daughter said ‘mamá, there are women working there, why don’t you go?’ So I came,” she tells IPS.

Benítez explained her situation to Barrientos, who told her: “Bring an apron tomorrow and you can start.” She has been working in the soup kitchen for four years now, and says she receives “huge support.”

“What I bring home is more than what I could earn, and I feel useful helping people who are worse off than me,” she says. “We learn so much from Señora Margarita, who does the impossible to make sure no one leaves with empty hands.”