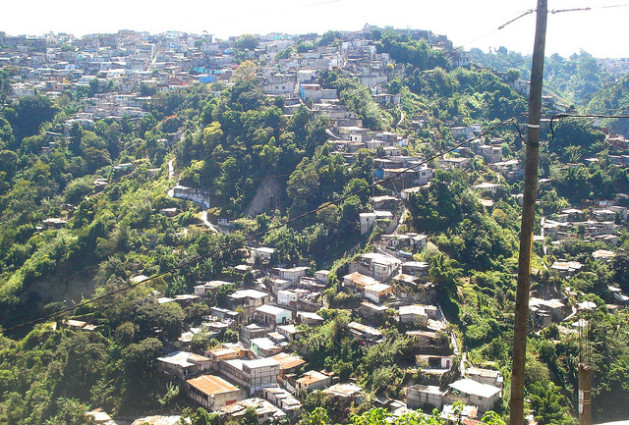 This shantytown in Guatemala City reflects the poverty and inequality that persists in Latin America. Credit: Danilo Valladares/IPS

In 2010, these social programmes operated in 18 countries, reaching 19 percent of the region’s approximately 600 million people and achieving “a substantial reduction in extreme poverty and a significant fall in inequality,” according to the study published by the Centre for Distributive, Labour and Social Studies (CEDLAS) of the National University of La Plata.

Gasparini and Cruces, CEDLAS’ director and deputy director, respectively, say that non-contributory programmes “were the main innovation” in social policies in the region over the last decade.

“Cash transfer plans are very useful instruments as part of an overall strategy for reducing poverty and inequality,” Gasparini told IPS. “They are relatively easy to implement, administer and monitor, and they have a direct impact on the beneficiaries’ quality of life.”

Gasparini highlighted the advantages of the conditions attached to the payments, which provide “an incentive for certain behaviours, such as encouraging school attendance by children and teenagers, and more regular health checks.” While they “are not a complete solution to the serious problem of income distribution, their importance should not be underrated,” he said.

According to the study, published in March, even in a scenario of sustained economic growth, programmes like Argentina’s universal child allowance (Asignación Universal por Hijo) and Brazil’s family allowance programme (Bolsa Família) “play an essential role in achieving improved distribution.”

“The region cannot depend solely on economic growth, even if there is full employment, because social protection is also needed,” the study says.

The plans, which different in format, aim to provide a monthly transfer from state coffers to low-income families or elderly people who worked in the informal economy and do not draw pensions. The family plans usually require school attendance and health checks for children under 18.

The list continues with Tekoporâ/ProPaís II in Paraguay, Juntos in Peru, Solidaridad in the Dominican Republic, Plan Equidad and Asignaciones Familiares in Uruguay, and similar plans in Nicaragua and Venezuela.

The least effective plan appears to be Mexico’s Oportunidades, judging by the rise in poverty, which affected 53.3 million of the country’s 118 million people at the end of 2012, according to the National Council for the Evaluation of Social Development Policy (CONEVAL). Given these results, the government is reviewing the programme.

“The basic weakness is the concept that the problem of poverty is due to a lack of skills, and that the main focus must be on funding capacity building,” said Clara Jusidman, honorary president of Incide Social, an NGO in Mexico.

“Oportunidades is a typical programme that views the supply side of the problem, seeing individuals as falling short when it comes to joining the labour market and taking part in development,” she told IPS.

Created in the late 1990s, Oportunidades, which took on its current form in 2002, has a 2013 budget of over five billion dollars and aims to benefit 5.8 million families. The family allowance is conditional on children and teenagers staying in school and attending health checks.

According to Jusidman, “under this plan, human rights have been violated and people have been excluded, and the state takes a paternalistic attitude, because beneficiaries are transformed into subordinates who must wait on the decisions of governments and officials.”

Gasparini and Cruces pointed out that in the 1990s, the region’s economic growth was associated with greater inequality. In contrast, since the turn of the century, cash transfer programmes have contributed to an acceleration of the reduction of poverty, and especially extreme poverty.

The proportion of people living on less than 2.50 dollars a day shrank from 27.8 percent of the population of Latin America in 1992 to 24.9 percent in 2003, 16.3 percent in 2009 and 14.2 percent in 2010, the study says. It recommends expanding coverage to bolster the impact of the programmes over a shorter timespan.

“In several countries, the beneficiary base is still small and in others the amounts involved are trifling. There is room to expand these programmes,” Gasparini said. However, he did not think universal coverage was necessary. “It makes no sense to extend the programmes to the non-vulnerable population,” he said.

In contrast, with an “additional fiscal effort of 0.5 percent” of GDP for these social programmes, the region would achieve the same poverty reduction 10 years earlier, in 2015.

Based on the Economic Commission for Latin America and the Caribbean (ECLAC’s) figures for 2010, the region spent an average of 0.4 percent of GDP on cash transfer programmes. According to the authors, some countries could increase their efforts, in line with the study’s recommendations, while others may have to take out external loans.

The countries that will need most aid are those where a high proportion of the population is in the informal economy and therefore lacks health and retirement coverage – such as Bolivia, Ecuador, Mexico, Nicaragua, Paraguay and Peru.

“Bolivia, Nicaragua and Guatemala need foreign assistance for programmes to cover the proportion of their population living in extreme poverty,” Gasparini said. The other countries have the resources to finance these programmes, and even to expand them, he said.

The head of CEDLAS said the current average expenditure seemed relatively small compared with other subsidies that benefit the middle and upper classes. He added that while these programmes are sometimes criticised, “there is broad social support in most countries and very few candidates to elected posts in the region openly call for their elimination.”

Gasparini said, however, that support for the programmes “does not negate the fact they may have undesirable features, such as slowing down the rate of formalisation of the economy, or effects on the supply of labour, which need more serious work.”

With additional reporting by Emilio Godoy in Mexico City.