MAPUTO, May 12 2009 (IPS) - Their mud huts perch precariously on the eroded, high embankment of the Zambezi river, in the provincial capital of Tete, in central Mozambique. But watching their homes be washed away by erosion or floods is just another risk for the residents of Matundo and Matheus Sansao Muthemba bairros. Their lives are as precarious as their homes. 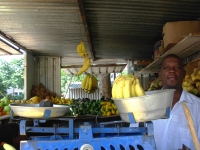 Even one dollar a week makes a big difference in the ability of the poor to invest productively, say researchers. Credit: Mercedes Sayagues/IPS

The bairros – or shantytowns – have no electricity, just a few taps and poor sanitation. A cacti grove doubles as the collective toilet in Matundo. Unemployment and poverty are rife.

A 2008 study of 500 households conducted by independent researchers Leonor Teressa Matine and Ambrosio de Fonseca found that two thirds of homes shelter between six to ten people, but few families manage to pull in the equivalent of a farm worker’s monthly minimum salary of $55.

They work hard to diversify their sources of income: they sell at the market and the bus station, cultivate small plots, build and rent out shacks, gather and sell firewood and re-plaster houses. Some sell sex. Some beg on the streets. A few have jobs as domestic help or night watchmen.

Fourteen percent, mostly elderly and mothers, receive the state poverty subsidy of $4 a month per adult and $2 per child, according to Matine and de Fonseca’s study "Vulnerability and Survival Strategies among Families in the Periphery of the City of Tete: Studies of the bairros Matundo and Matheus Sansao Muthemba". Few families can eat three times a day.

"They can never overcome their vulnerability," said Matine at a seminar on poverty dynamics and patterns of wealth accumulation, organised by the Institute for Social and Economic Studies in April in Maputo.

Mozambique is touted as a success for keeping peace after a civil war that ended 17 years ago and welcoming foreign investment. Yet, deep poverty remains relentless. Mozambique ranks 127 out of 135 countries in the human poverty index of the United Nations Development Programme (UNDP).

For many peasants, the average monthly cash income is one dollar, according to Joseph Hanlon, social scientist and senior lecturer in development policy and practice at the Open University in Milton Keynes in the United Kingdom. Child malnutrition is rising, says United Nations Children’s Fund (UNICEF).

Several speakers argued that the best way to help the poor escape the poverty trap is to give them a bit of cash every month. Social protection through cash transfers has shown success in Latin America, especially in Mexico and Brazil, says the World Bank in its February 2009 report "Conditional Cash Transfers: Reducing Present and Future Poverty."

But can one of the world’s poorest countries tackle such a scheme?

"For the elderly in remote areas, cash works better than food," reckoned Janet Duffield, director of Beira-based NGO HelpAge. "It gets people to hospital. It buys goods they need."

HelpAge is researching poverty among the elderly, at a time when traditional social security systems based on inter-generational support and migrant workers’ remittances are as eroded as the Zambezi shore in Tete.

"We see very rational thinking in spending among the poor," said HelpAge researcher Sydney Machafa. Even one dollar a week makes a big difference in the ability of the poor to invest productively, he says.

Currently, only 0.6 percent of Mozambique’s state budget goes to direct social assistance through a fragmented array of schemes managed by several agencies focusing on orphans, women, the elderly and flood or cyclone victims. The food subsidy of the National Institute of Social Action reaches 140,000 elderly. But these schemes are partial, short-term and miss many needy people.

Many studies, such as the 2006 report by World Bank "Mozambique Agricultural Development strategy – Stimulating Smallholder Agricultural Growth," show a lack of demand for goods in rural areas because people simply don’t have money. A small cash transfer would boost local demand.

The logistics of doling out cash in this vast country of 880 square kilometres and 20 million people appear daunting. Yet, it is possible, as shown when war-torn Mozambique managed to give demobilisation pay during two years to 100,000 soldiers after peace in 1992.

To give the subsidy across the board to all Mozambicans would reduce administrative costs and opportunities for corruption in the selection, divisiveness, jealousy and accusations of witchcraft, researchers said at the conference. Besides, the Latin American experience shows that only the really poor will spend time to claim a small amount of money.

Still, in Mozambique, where donors pay for more than half of current government expenditure of about $3.6 billion, some question the sustainability of social protection schemes.

Donors fear creating dependence because countries that have adopted the practice of cash transfers, such as Brazil and South Africa, treat the grants as a permanent social expenditure, part of state welfare. This means that outside donors would be roped into an unlimited amount of social aid or have to – against the aim of the cash transfer programme – limit implementation to a certain time period.

"The aid industry wants an exit strategy, a short-life scheme," explained Hanlon, who is currently working on a book about cash transfer systems all over the world. There is local resistance as well.

"A common view of senior politicians and civil servants is that the poor should help themselves out of poverty. There is enormous reluctance to institutionalise social protection as a right," said independent researchers Rachel Waterhouse and Gil Lauriciano in their 2009 study "Social protection in Mozambique: A new imperative".

If the cash transfer scheme does not get support from the Mozambican government, there is little possibility that it will be implemented in the country, as international donors will be unlikely to fund a programme that does not have a time and expenditure limit. Waterhouse and Lauriciano point out that a growing number of government people and donors support "a new and broader approach to social protection."

"I am wary of donor fashions that come and go," concluded O’Laughlin. "But the issue of cash transfers needs to be debated. Accumulation of wealth and inequality keep reproducing poverty in Mozambique."

Discussions around the possibility of cash transfers have just begun in Mozambique, and it will take a few more months, or even years, before a decision pro or against cash transfers will be made.