Stories written by Mercedes Sayagues
In her 20 years in Africa, Mercedes Sayagues has survived stepping barefoot on a 10 centimeter-long scorpion in the Kalahari Desert, being taken hostage by Unita in Kuito during Angola’s civil war and being expelled by Robert Mugabe from Zimbabwe in 2001 for reporting on human rights abuses. She is a Knight Health Fellow in Mozambique since 2010, with a focus on improving health reporting. Her previous post was editor in chief of the Irin/PlusNews Portuguese service, from 2005 until 2008. A Uruguayan-born journalist, Mercedes specialises in AIDS, gender, sexuality, health, humanitarian issues and human rights. She has written studies on AIDS policies in Senegal and Uganda and on investment in Mali for the South African Institute for International Affairs at Wits University. She enjoys writing quirky personal columns in South Africa’s Mail & Guardian and at IPS’s collective gender blog. Mercedes is an experienced media trainer, having facilitated more than 20 courses for the NSJ in Maputo, Mozambique and Fojo, Sweden as well as for UNICEF and UNAIDS. She has also produced two manuals on reporting on HIV/AIDS, one in Portuguese for UNESCO/NSJ in 2001 and one in English for PlusNews in 2008. Sayagues has an M.A. in Journalism from New York University and is fluent in English, Spanish, Portuguese, French and Italian. 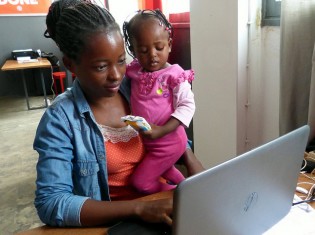 By Mercedes Sayagues
If you live in São Tomé, a good investment in your health is to plant a po-sabom tree (Dracaena aroborea) in your backyard. Leave space: it can grow up to 20 metres high, with sword-shaped leaves.

HEALTH: Go Away With Your Spray

By Mercedes Sayagues
Zinaldina dos Reus, Zizi for her friends, is washing clothes by a stream near the airport in São Tomé. Her toddler plays nearby. Zizi, 21, can't remember the last time she or her husband had malaria, years ago. She credits the free bed nets and anti-mosquito home spraying regularly supplied countrywide since 2004.

By Mercedes Sayagues
Their mud huts perch precariously on the eroded, high embankment of the Zambezi river, in the provincial capital of Tete, in central Mozambique. But watching their homes be washed away by erosion or floods is just another risk for the residents of Matundo and Matheus Sansao Muthemba bairros. Their lives are as precarious as their homes.

By Mercedes Sayagues
Cash transfers are the new darlings of proponents of welfare programmes. Mexico, Brazil, Bangladesh, lately New York City, and about two dozen developing countries presently dole out money to poor families, usually with conditions attached, such as taking their children to school and health checkups.

By Mercedes Sayagues
Laws against female genital mutilation are driving the practice underground and across borders, says UNIFEM.

By Mercedes Sayagues
Public health and individual human rights are poor friends. What may be good for society may be bad for the individual, or the other way round. And nothing sharpens this tension as starkly as AIDS.

By Mercedes Sayagues
What do they have in common - the landless widow with a deaf son in Bangladesh, the 12-year-old miner in Kyrgyzstan, the Ugandan farming couple with 12 children and the South African domestic worker who loses her home when her husband dies and her job when she breaks a leg? They, and their children, are trapped in chronic poverty, even as their countries show economic growth.

By Mercedes Sayagues
Annette* is a small, lively woman in her early sixties. Married to an abusive husband - who once threw boiling water on her, landing her in hospital - she was not repeating the story with her alcoholic and drug-addicted son. Just as her husband was growing older and calmer, her son was getting increasingly violent.

By Mercedes Sayagues
The fragrance of ginger and paw paws from market stalls floats into the tiny room where Musisi Josephus Gavah shows visitors a thick ledger - the register of members of the Mukono District Network of People Living with HIV/AIDS.

By Mercedes Sayagues
In the Nguni languages, which include Zulu and Xhosa, an "indlavini" is a violent and reckless man who disrespects elders and tradition. The indlavini emerged in the early twentieth century, when millions of South African men migrated to towns – looking for jobs in the gold and diamond mines.

By Mercedes Sayagues
Traffic stops around the Old Mosque in the Senegalese capital. Thousands fill the streets, and when the muezzin calls, they kneel, bow and pray in perfect unison.
The sermon is about the earthly problem of how to avoid contracting HIV, and helping people who have the virus. On Sunday, Catholics will hear a similar message.

By Mercedes Sayagues
It's 13:30 in the Senegalese capital, Dakar, on Friday. Traffic stops around the Old Mosque. The sound of babouches shuffling on the pavement replaces hooting. Thousands fill the streets.

RIGHTS: Breaking the Silence about Gender-based Abuses in Zimbabwe

By Mercedes Sayagues
During the day, she hid in farms. At night, she slept in the bush or with goats in kraals.

By Mercedes Sayagues
It might look like an ordinary cactus but the Hoodia Gordonii has become a symbol of efforts to reverse the worldwide history of exploitation of indigenous peoples.

At a ceremony in a remote corner of the Kalahari, the South African San peoples were recognised as official holders of traditional knowledge.