MAPUTO, May 4 2009 (IPS) - Cash transfers are the new darlings of proponents of welfare programmes. Mexico, Brazil, Bangladesh, lately New York City, and about two dozen developing countries presently dole out money to poor families, usually with conditions attached, such as taking their children to school and health checkups. 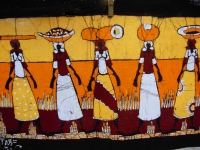 Can Mozambique, one of the world’s poorest countries, afford social protection through a broad cash transfer scheme? Joseph Hanlon, a lecturer on conflict resolution at the Open University, Milton Keynes, England, says yes.

Hanlon is editor of Mozambican Political Process Bulletin, and in 2008 with Teresa Smart authored a critique of Mozambique's aid and development model titled "Do More Bicycles Equal Development in Mozambique?"

He spoke to IPS at a seminar on poverty dynamics organised by the Institute for Social and Economic Studies in Maputo at the end of April.

IPS: What are you proposing?

Joseph Hanlon: Just give money to the poor. People cannot pull themselves up by the bootstraps if they have no boots.

IPS: Cash with no conditions?

JH: If there are schools and clinics nearby, the poor send their children. Conditionalities for the poor only placate the tax-paying middle classes.

IPS: How would the cash be targeted?

JH: Choosing a small group is socially divisive. Imposing conditions and excluding people is both time-consuming and expensive and, in the case of Mozambique, quite ineffective and unfair. Seventy per cent of Mozambicans are poor.

IPS: Then who should get it?

JH: Eventually, all poor families. To begin with, since most Mozambicans live in extended families with children and older people, the most efficient and non-divisive system of cash transfers would be a universal child benefit and non-contributory pension.

IPS: Your paper does not mention the feminisation of poverty. Why?

JH: In Mozambique, women-headed households are not significantly poorer than others. Poverty is a general problem. It makes more sense to improve the whole family’s economic standards and productivity.

IPS: Why not target women specifically?

IPS: Yet you suggest giving the cash transfer to the senior woman in the family.

JH: It is easier to give the cash transfer to families, not individuals, but we must a bit careful with family dynamics. There is some indication that women spend money on food for the family but, at the same time, money may be invested in consumption rather than production. It is a horrible trade off that the poor face.

IPS: What would the cost of the programme be?

JH: The current monthly subsidy for the elderly is 100 meticais (about US $4), and 50 for a child. A scheme of pensions for over-65s and school-age children aged 7 to 14 would equal 0.8 percent of GDP, or $80 million. It is practical and affordable.

IPS: Where would the money come from?

JH: A five percent increase in donor aid could fund the program, from the additional aid promised at the Gleaneagles Summit. In the future, when Mozambique becomes a mineral and energy exporter, it should set aside a portion of mineral revenues to fund social protection, like Bolivia and Alaska.

IPS: How will this cash transfer help the economy?

IPS: How do cash transfers relate to the Millennium Development Goals?

JH: The focus on MDGs has led to disproportionate spending on health and education by donors and governments, forgetting MDG 1 – halving poverty. More aid to create jobs and economic development is needed. So, let’s put the money in the hands of the people. The poor invest wisely.

JH: I would opt for either the Brazilian or South African models. In Brazil, recipients are self-declaring families below the poverty line. In South Africa, children and old people. What is important is that both programs are rights based, largely unconditional, and universal.

IPS: Social protection in the form of old age pensions and child grants is not new. What is new about cash transfers?

JH: The neo-liberal and aid agency models blame both poor people and poor countries for their poverty; they must be educated and controlled. The poverty trap model says the poor know what to do but lack the money to feed their children and invest, so give them money.

The key issue of underdevelopment is lack of demand (due to the poverty trap), not supply (as in the neo-liberal model). Demand looks at the poor, while supply looks at the rich as the engine of development.