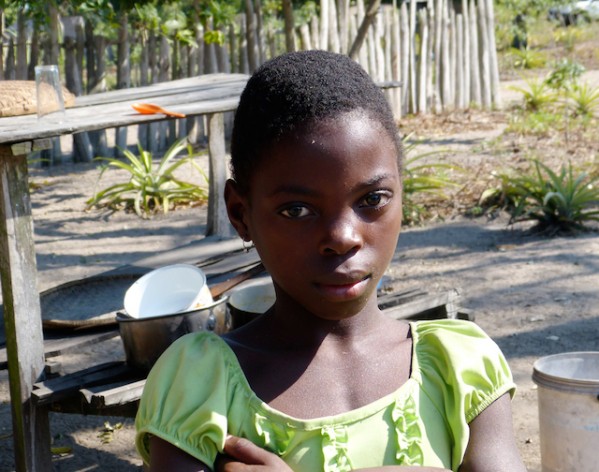 MAPUTO, Oct 31 2014 (IPS) - The woman on bed 27 in Maputo Central Hospital’s oncology ward has no idea how lucky she is. In January, when abdominal pains racked her, a pharmacist suggested pain killers. For months, “the pain would go and return,” she told IPS.

In April she went to the local clinic in Matola, 15kms from Mozambique’s capital, Maputo. Its nurses had just been trained and equipped to detect cervical cancer. An invasive growth was found and the patient referred to Maputo Central Hospital (HCM, in Portuguese). Chemotherapy started in June. When IPS met her, she had just finished the third month of chemo. Doctors are optimistic.

This year, in three districts in south, central and northern Mozambique, 8,500 10-year-old girls were vaccinated against the Human Papilloma Virus (HPV) in a pilot project.

The vaccine must be given before girls become sexually active and exposed to HPV.

The girls will get the third and final dose this month, researcher Khatia Munguambe, of the Manhiça Health Research Centre (CISM, in Portuguese), told IPS.

Manhiça, 90 kms north of Maputo, is one of the pilot sites. CISM studied the types of HPV common in Mozambique and trained vaccination staff.

Munguambe is researching acceptability of the HPV vaccine among communities and found “very few refusals in Manhiça”.

Scaling-up is next. In 2015, all girls born in 2005 in Manhiça and Vila de Manica in the South and Mocimboa da Praia in the North will be vaccinated.

Jhpiego, a Maputo-based Johns Hopkins affiliate, trains nurses and doctors in routine screening with a ground-breaking technique – visual inspection with acetic acid (VIA).

Before VIA, detection involved the Papanicolau test or pap smear, which requires specialised staff and costly labs, and can take weeks for lack of technicians.

With VIA, the nurse smears the cervix with acetic acid or white vinegar; damaged tissue appears white. The nurse can remove it with cryosurgery (freezing) on the spot, or order a biopsy and refer to a doctor.

Easy, fast and cheap, VIA requires little personnel and equipment. Detection and treatment take place in the same visit, reducing the personal and economic burden of health care. In rural and poor settings, this is a blessing.

The main problems Jhpiego finds are the frequent breakdowns of cryotherapy equipment, turnover of trained staff, and maintaining quality in diagnosis.

What saved her was something new in Mozambique – routine screening for cervical cancer done by nurses in basic health facilities.

“Women seek help when they feel pain, and pain means cancer at advanced stage,” says nurse Ana Mafalda Chissano. “But if they go to the gynaecologist and get a pap smear, that takes months, plus time and bus fare. By then, it’s too late.”

Mozambique has Africa’s highest cervical cancer cumulative risk and mortality — seven out of 100 newborn girls will develop this cancer and five will die from it —   and ranks second in  incidence after Malawi, according to the Africa coalition on maternal, newborn and child health.

Every year, 5,600 Mozambican women are diagnosed with cervical cancer. Of these, 4,000 die – 11 every day. There is no palliative radio therapy; it is a painful death.

These are the recorded deaths only. Just over half of Mozambicans have access to health care, so many die at home undiagnosed.

High HIV prevalence – one in 10 Mozambicans has the virus – compounds the problem. HIV positive women have higher risk of developing this cancer, and at a lethal speed.

“The weaker the immune system is, the faster cervical cancer grows,” explains Dr. Amir Modan, with the United Nations Population Fund in Maputo.

Cervical cancer is the most frequent cancer among Mozambican women aged 15-44, says Modan.

Health authorities are tackling the problem through information campaigns and by integrating routine screening in family planning services. They hope to reach all districts by 2017.

After treatment with cryosurgery (freezing), a woman should abstain from sex during 30 days. This can be tricky, says Janet Gibunda, an MSF nurse at Alto Mae clinic, because many women must inform the husband about the sex ban before having the procedure.

“But they return, we don’t lose them,” she says. “I think the shocking photos of advanced cancer we show them make them come back.”

Cervical cancer is caused by the human papilloma virus (HPV), transmitted mostly through sex. It is a common virus; many people carry it but it remains dormant. Of the 40 types of HPV, some go away on their own, some cause genital warts, and some cause cancer.

Another risk factor is low condom use. Less than a quarter of people use condoms in risky sex, says Modan, heightening exposure to both HPV and HIV. HPV infection doubles the risk of acquiring HIV, while HIV hastens progression of cervical cancer.

High fertility at early age and a high number of live births increase the risk. This is bad news for Mozambique’s child brides.  Four out of ten girls are mothers by age 19 and on average a woman bears more than five children, says Modan.

“Girls start having sex very early; by age 25, they may have 12 years of sex,” says Cardoso.

According to the 2011 demographic health survey, one-third of women had first sex before age 15.

Layne Heller is a Christian volunteer at the HCM oncology ward.  This is her fifth year giving emotional support to patients during the long and lonely months of chemotherapy, which are especially hard for women from the provinces.

“They are so scared,” says Heller.  “Back home, the perception is that women come to HCM to die. They are terrified.”

To some extent, it was true. Women arrived in terminal stages of cancer and died. But now, with early detection and better treatment, more women survive.

A study conducted by Cardoso in Zambezia province in 2010 found that half of women interviewed associated cervical cancer with promiscuity and 42 percent with witchcraft.

“Cervical cancer was called ‘the neighbour’s disease’ because people believed a neighbour had placed a curse on the woman,” explains Cardoso. “But that is changing thanks to the information campaign.”

Launched in 2013 and led by the former First Lady, Maria da Luz Guebuza, the campaign saturated the media and all kinds of events, from mother’s day to fashion shows.

A key issue, says Cardoso, is reinforcing the concept of prevention in health care.

“Prevention is not part of our culture,” she says. “We only go to hospital when we are sick. This is slowly changing as people realise how important it is to prevent.”