PHILIPPINES: Cash Grants Get Youngsters Back into School

MANILA, Dec 9 2010 (IPS) - Give the poor cash and they will spend it on things other than their most basic needs. Or with no thought for their future, let alone their children’s, they just might indulge in wasteful spending. Right? 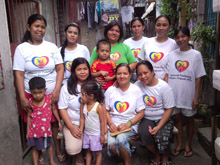 These women, whose families get cash grants to keep their children in school, meet regularly to discuss other ways of income generation. Credit: Tess Bacalla/IPS

Wrong. Marilyn Vargas, 42, says the conditional cash transfer (CCT) poverty alleviation scheme, of which her family is among the beneficiaries in the Philippines, is no dole-out.

Thanks to the CCT, she says, one of her four children, now 14, has been able to go back to school after a two-year poverty-induced hiatus. And thanks to the conditions that go with the scheme, such as attending monthly family development sessions, she considers herself wiser in the ways of parenting.

Without the monthly government cash grant of up to 1,400 pesos (32 U.S. dollars), sending her children to school would have been an even greater burden for Vargas’ family of six. She and her ailing husband sell vegetables for a living in their neighbourhood in Pasay City, a highly congested city in the Philippine capital.

The CCT programme extends cash assistance for five years to the poorest Filipino families, provided they keep their children in school, ensure that they get preventive medical check-ups, see to it that pregnant women receive pre- and post-natal care, and parents attend monthly family development sessions. The Philippines’ CCT programme aims to reach one million of the poorest households in this South- east Asian country of 94 million people in 2010.

Vargas and some of her neighbours in Barangay (village) 184 in Maricaban, Pasay, have not gone idle since coming under the CCT programme.

“At the start, we had no idea (about our obligations) other than to use the cash card,” admits Vargas, the parent- leader of a group of women beneficiaries in her community, one of several organised by the city government with the Department of Social Welfare and Development, which leads CCT implementation in the country.

Today, they take part in other poverty alleviation schemes of the city government, including a community savings-driven programme.

“I used to just stay home, tending to my (three) children,” recalls Anna Liza, a 28-year-old single mother. Now she makes it a point to join her group’s meetings, led by Vargas, to discuss their activities as CCT grantees, which include pooling their individual weekly savings of 20 pesos (46 cents) in the hope of starting a business to sustain them after the cash grants end.

Included in the maximum monthly cash grant per household beneficiary is an education cash aid of 300 pesos (7 dollars) for up to three children 14 years old and below. The monthly assistance also includes 500 pesos (11 dollars) for the family’s, particularly women’s and children’s, health and nutrition needs.

Although basic education is free, many poor families cannot provide for their most basic needs. Seven out of 10 Filipinos try to meet their food, shelter, clothing, medical, education and other basic needs with about two dollars a day, says the non-profit research group IBON Foundation.

“It’s not enough that schools are free,” says Mary Grace Agcaoili, social policy specialist at the United Nations’ Children’s Fund, one of the international agencies supporting the Philippines’ CCT programme.

“Low schooling, ill health and high malnutrition are strongly associated with the poverty cycle in the Philippines,” says Social Welfare Secretary Corazon Soliman in a press statement. Between 1990 and 2005, school enrolment declined from 99.1 to 84.4.

In Cebu City, some 600 kilometres south-east of Manila, Edelito Mabano, chief of a mountain village called Kalunasan, says he has seen social changes take root in the community where there are some 324 CCT family beneficiaries.

The incidence of child abuse has declined and enrolment in day care centres has increased as parents put more premium on their children’s welfare, he believes.

Parents’ maltreatment of their children used to be common in the village, Maria Baswa, whose family is one of the beneficiaries in Kalunasan, tells IPS. Some did not care if their young children were in school while they spent the day playing a rummy card game known as ‘tong-its’. But those days are over, she says.

With roots in Latin America, CCT programmes are “increasingly being perceived as a magic bullet for poverty reduction,” says an Asian Development Bank policy brief.

The Philippines launched its CCT scheme, dubbed ‘Pantawid Pamilyang Pilipino (Building Bridges for the Filipino Family) Programme’, or 4Ps, in 2008. In fact, it is scaling up its targeted number of beneficiaries to 2.3 million households by 2011 – with a budget of 34 billion pesos (77 million dollars) – and on to about four million families by 2016.

The 32-dollar monthly cash grant can increase by 52 percent the average monthly income of 2,700 pesos (73 dollars) that the poorest Filipino families make, says an IBON Foundation paper on ‘Conditional Cash Transfers and the Persistence of Poverty’.

But while the CCT provides short-term income relief, its grants “nonetheless remain dole-outs because beneficiaries get money in exchange for something unrelated to their labour as productive individuals,” the foundation points out.

“(But) why do we call it dole-out when it comes to the poor?” Agcaoili asks, adding that the middle and working class have social protection mechanisms that are not always accessible to the poor. “The CCT gives the poor some leverage so they have some cash to deal with as they try to lift themselves out of poverty.”

“The majority of our poor people want to get out of poverty and were already doing something about it” even before all these poverty reduction schemes, Soliman tells IPS during a visit to CCT beneficiaries in Kalunasan, Cebu City. The CCT is a “big boost” to such efforts, she says.

And when poor families receive the cash grants, “they have a good sense of what to do with it – they spend it for their children,” says Soliman.

For a mother whom she met, this meant something as simple as being able to buy her children a proper schoolbag. For another parent, cash aid means no longer subjecting her family to the choice of having three meals a day – or sending children to school.

That is the level of hardship the CCT poverty intervention policy is trying to address, Soliman points out. “Otherwise, we condemn them to an intergenerational cycle of poverty.”