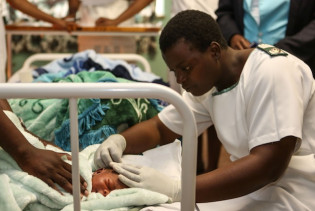 By Kristin Palitza
A newborn baby lets out a feeble cry as midwife Anna Mungara tends to a small wound on its head, at the provincial hospital in Masvingo, a town in southeast Zimbabwe.

By Kristin Palitza
In his new book, “The Great African Society – A Plan for a Nation Gone Astray”, Hlumelo Biko, the son of late Black Consciousness leader Steve Biko, says that if nothing changes in South Africa, the country will become engulfed by corruption, crime, social decay, hopelessness and anger.

By Kristin Palitza
Half asleep, Anuary lies exhausted on his bed in Amana Hospital in Dar es Salaam, Tanzania’s capital. His mother, Mariam Saidi, sits on the edge of his mattress, staring blankly out of the window. Every now and then, she turns to wipe her 18-month-old son’s forehead.

By Kristin Palitza
The reality of Indian and Chinese investment in Africa is much more complex than the good cop, bad cop image of Asia’s two emerging economic giants.

By Kristin Palitza
The group of children playing in a shaded courtyard in Côte d’Ivoire’s economic capital Abidjan seem carefree. But when a car exhaust blasts, they tremble. When a soldier walks past, they shudder. And they become anxious when an unknown adult approaches them.

By Kristin Palitza
One-year-old Angama Ouattara lies on a rusted hospital bed, a drip attached to her tiny, left foot. Her mother, Minata, sits on the edge of the mattress, smoothing out the sheets she had to bring from home.

By Kristin Palitza
Seven out of the eight governments in the Sahel – the arid zone between the Sahara desert in North Africa and Sudan’s Savannas in the south – have taken the unprecedented step of declaring emergencies as 12 million people in the region are threatened by hunger.

By Kristin Palitza
If there was no HIV/AIDS, South Africa would have 4.4 million more people than today, the size of a major city. This significant slow-down in population growth is causing a slow down in economic growth and resulting in social ills, researchers warn.
Next Page »
ADVERTISEMENT ADVERTISEMENT