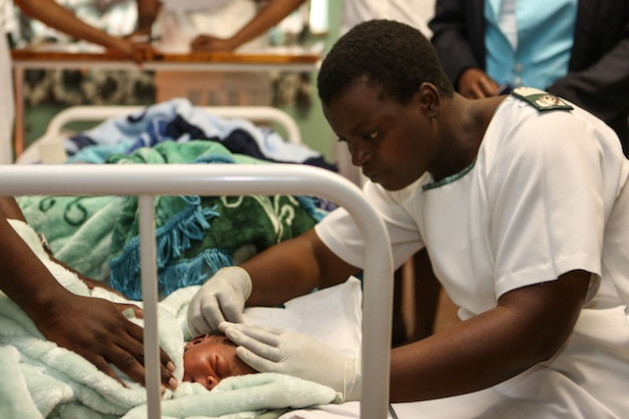 MASVINGO, Zimbabwe, Jun 19 2013 (IPS) - A newborn baby lets out a feeble cry as midwife Anna Mungara tends to a small wound on its head, at the provincial hospital in Masvingo, a town in southeast Zimbabwe.

With utmost care, Mungara cleans the cut, wraps the baby in two sets of warm blankets and makes cooing sounds to soothe him. When the infant calms down, she gently places him into an incubator.

Mungara, a trainee at the hospital’s midwifery school in Masvingo Province, is part of a new intake of nurses receiving additional skills to bring down skyrocketing maternal and infant mortality rates in this southern African nation.

Every day, eight women and 100 children die from pregnancy- and delivery-related complications in Zimbabwe, according to the United Nations Children’s Fund (UNICEF). Most of them die of easily preventable causes and illnesses.

Zimbabwe’s health sector, once among the best in sub-Saharan Africa, collapsed during the nation’s 2008 economic crisis, when hyperinflation of 231 million percent caused public hospitals to temporarily close down as they ran out of medicines, while skilled health workers left the country in droves to pursue better opportunities elsewhere.

A 435-million-dollar Health Transition Fund (HTF), sponsored by several European Union members and managed by UNICEF, hopes to reverse these figures by 2015. The money goes towards a retention and training scheme for health workers. It also goes to the supply of essential drugs and vaccines, the training of community health workers, and the planning and financing of health policy.

“Donor funding is great, but we need our own financing as well to make programmes sustainable.” -- District medical officer Dr. Emmanuel Chagondah

UNICEF Zimbabwe’s chief of young child survival and development, Aboubacar Kampo, tells IPS that one of the fund’s goals is to have at least one midwife per 5,000 people and three doctors in each of Zimbabwe’s 62 districts. Another aim is to achieve a more equitable distribution of health professionals between urban and rural areas.

“When we started to roll out the fund, Zimbabwe had 76 doctors countrywide. Most of them were working in Harare and Bulawayo (the two main cities). Today, the number of doctors has increased to 116, with most of the new recruits working in rural areas,” says Kampo.

At Masvingo Provincial Hospital, senior tutor Catherine Sithole and her team train 60 new midwives per year. The midwifery school is one of several in the country, aimed at undoing the dramatic brain drain that the national health system suffered over the past years.

In 2001, about 80 percent of midwife posts were vacant, according to the Zimbabwean Ministry of Health and Child Welfare. Especially rural areas were drained of skilled staff.

A key component of the HTF is the payment of bonuses to health workers to encourage them to stay in the country and, most importantly, take up usually less sought-after positions in rural areas, which experience the most drastic shortfalls in service delivery.

Mungara knows from experience how tough it is to provide even the most basic health care in Zimbabwe’s rural areas. Before she joined the midwifery school, the 36-year-old was employed at a clinic in Zaka, a remote village 80 km south of Masvingo town.

“We have no resources to assist women during deliveries. It is difficult to get referrals for pregnant women with issues like hypertension, or even to get transport to the nearest hospital,” she tells IPS.

Since the HTF formed in 2011, the gap has been closing, but only slowly. Sithole tells IPS: “Having more trained midwives is really making a difference to the health of mothers and small children. The training enables them to make better decisions with regard to their patients.”

But external funding alone will not be enough to resolve Zimbabwe’s health crisis in the long run. The government will have to substantially increase its spending on health to help rebuild the health system and ensure sustainability beyond 2015. The current health budget of 380 million dollars will not be enough to achieve this, experts say.

“The government is only spending 26 dollars per person on health, less than half of what they should allocate,” says Kampo. “At the moment, the health system is 70 percent donor-funded.”

Given Zimbabwe’s dire economic situation – the cash-strapped country is 10.7 billion dollars in external debt – the health budget is unlikely to receive a substantial increase any time soon.

“We don’t have much money in the country and can’t get credit. Although long-term prospects of recovery are good, given the richness of natural resources, recovery hasn’t even started yet,” independent economist John Robertson, from Robertson Economic Information Services in Harare, tells IPS.

Health department officials admit that more needs to be done to give the national health system a sustainable boost. Dr. Robert Mudyiradima, the provincial medical director of Masvingo Province, tells IPS: “There is not enough budget support. Whatever finances come through the HTF have to fill a very big hole.

“There are still weaknesses in the general drug supply. Service delivery is not what it is supposed to be. Until the Zimbabwean government’s budget support for health services is adequate, the demand for services will be overwhelmed by the need,” Mudyiradima says.

A walk through the Chivi District Hospital, which services a population of 174,000 in Chivi, a small town in Masvingo province, illustrates Mudyiradima’s point. Most days there is no running water here, the hospital kitchen is out of order, washing machines and the incinerator are not operational, and power outages are frequent.

When Chagondah started working here 11 months ago, the facility had been without a doctor for more than four years. Due to the HTF retention scheme, two other doctors recently joined him, while numerous vacant nursing positions have been filled.

“The quality of services has improved a lot due to an increase in personnel, but drug supply and technical equipment remain big challenges,” the young doctor says.

He has set his hopes on the government keeping its promises to increase the national health budget.

“Donor funding is great, but we need our own financing as well to make programmes sustainable.”