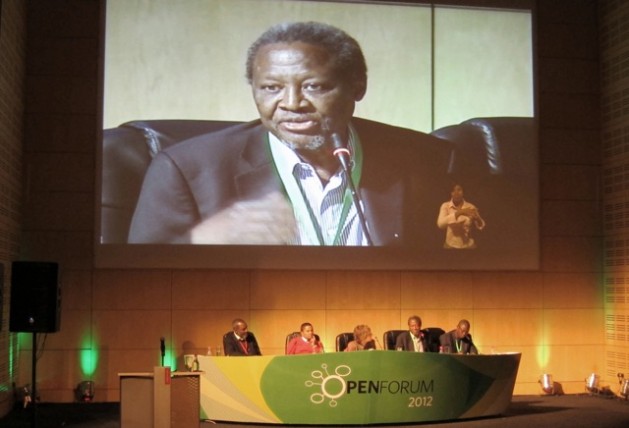 CAPE TOWN, May 22 2012 (IPS) - Africa needs to reduce its dependency on foreign aid and get to the point of financing its own development, some of the continent’s key development experts say. Timing is optimal now that Africa is experiencing an economic boom with annual growth rates of up to eight percent.

“Africa has become a place where you will make money, not lose money,” said Graca Machel, the wife of former President Nelson Mandela and a renowned women and children’s rights activist.

She addressed delegates at the “Money, Power and Sex: the Paradox of Unequal Growth” conference organised by the Open Society Institute of Southern Africa May 22 to 24 in Cape Town, South Africa.

Africa’s richness in natural resources should give the continent’s governments a strong position at global negotiating tables, said Machel.

“African governments have to radically change the way they see the potential of the resources we have,” she said.

She added that they needed to create real partnerships, refuse to be patronised and ensure that economic gains benefited all people on the continent.

Machel warned that Africa’s exceptional economic growth over the past decade had not resulted in more equity, equality and fairness for all. To achieve this, countries needed to collaborate more intensely on a sub-regional or continental level, she suggested.

“Africans need to have a more inward focus to benefit our continent as a unit. We must not continue in a scattered, territorial way. No one will make it alone. We will make it when we’re united,” said Machel. This also means moving away from a “hand-out mentality” and a focus on aid, she added.

“We need to mobilise domestic resources,” agreed Thandika Mkandawire, a professor of African development at the London School of Economics in the United Kingdom and a former director of the United Nations Research Institute for Social Development, who hails from Malawi.

If African countries continued to rely on external funding, they would be turned into “choice-less democracies”, he warned, because dependency on foreign aid means that political and economic agendas are partially set overseas.

Mkandawire conceded, however, that foreign aid could be useful if it was linked to economic growth.

“The problem is the model of aid, not aid in itself. In the last 20 years, aid ceased being developmental. It is used for political stabilisation purposes, it is conditional and welfarist instead of being focused on creating jobs or performing developmental functions,” he said.

The good news is that foreign aid for Africa is already on a steady decline in relative terms. Because the continent is experiencing economic growth at seven to eight percent annually, and foreign aid makes up on average between three to four percent of a nation’s GDP, aid will over time decrease in proportion of total resources spent.

But African governments will have to use the additional income effectively to translate monetary gains into development, Mkandawire said.

“We have to make governments much more efficient. We need better taxation systems and a more restrained consumption culture, a savings culture,” he suggested.

Although domestic savings can play a key role in financing development in any economy, for example by providing resources for investment, boosting financial market development and stimulating growth, sub-Saharan African countries are only saving on average about 15 percent of their GDP. This is down from 20 to 25 percent in the 1970s, according to the United Nations Economic Commission for Africa.

African countries compare poorly to other major developing blocs like China and India, which currently save 35 to 40 percent of their GDP. Such differences in savings rates can ultimately make the difference between thriving and stagnant economies.

“Africa is not poor. We just don’t know how to manage the resources we have,” said Dr. Nkosana Moyo, executive chair of the South African Mandela Institute for Development. Too much of Africa’s capital continues to leave the continent in the form of raw materials, instead of contributing to the development of the continent by adding value through manufacturing, production and services, he said.

The next step is to link economic growth to social inclusion, to ensure development for all.

He believes one of the continent’s key assets is its emerging and young middle class. They have in the past couple of years already shown their political force – most prominently during the Arab Spring – and now need to demonstrate their economic force, Gabriel said.

“The young middle class will be the engine for Africa’s development in the medium to long term,” said Gabriel.

African governments therefore need to make sure that natural resources are used adequately so they can lead to job creation to turn this new middle class into a productive part of society. Currently, between seven and 10 million young Africans on the continent are looking for jobs.