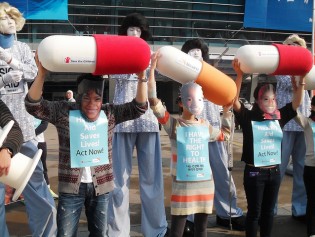 By Katelyn Fossett
The United States’ main foreign assistance agency is getting widespread plaudits for new data on a series of internal reforms aimed at aid improvement, but some development experts are pointing to a persistent opaqueness from the agency.

By Carey L. Biron
As a major international deadline on foreign assistance transparency draws closer, a new index shows that while donors are becoming more open with their data, still less than half of foreign aid information is openly available.

By Carey L. Biron
Observers here on Tuesday lauded the newly released Group of Eight (G8) Camp David Accountability Report as a noteworthy step towards transparency and accountability, but warned that the data included suggest a looming shortfall in international agriculture-related foreign aid.

By Jane Regan
As predicted, the beginning of the rainy season in Haiti brought exponential increases in the numbers of people sickened and killed by cholera.