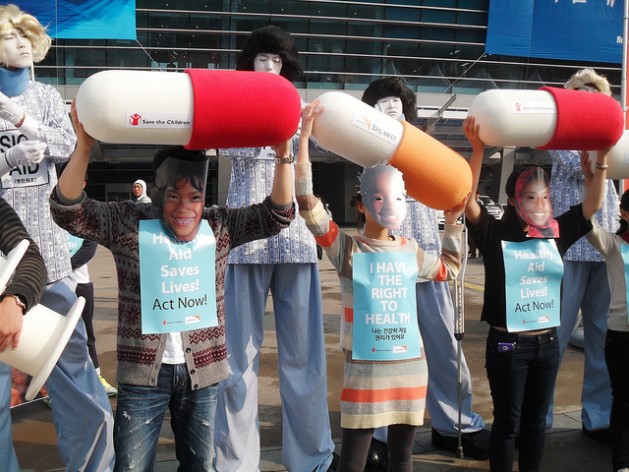 Demanding a right to health at the Fourth High Level Forum on Aid Effectiveness in Busan. Credit: Miriam Gathigah/IPS

WASHINGTON, Oct 2 2012 (IPS) - As a major international deadline on foreign assistance transparency draws closer, a new index shows that while donors are becoming more open with their data, still less than half of foreign aid information is openly available.

“Progress is being met, things are getting better, but that progress is modest,” David Hall-Matthews, the managing director of Publish What You Fund, a global initiative advocating for aid transparency, said in unveiling the organisation’s Aid Transparency Index 2012 here in Washington on Monday.

Nearly two-thirds of the organisations that Publish What You Fund surveyed both last year and this year showed improvement, with the average score across all donors going up from 34 percent to 41 percent transparency.

“Although progress is being made, 41 percent is a long way short of good practice – it’s not quite a pass mark, and most aid information is still not public and not being published in compatible format,” Hall-Matthews warned.

The index, which tracks 43 transparency metrics, is still a new initiative, having begun only last year, in collaboration with the One Campaign, an anti-poverty advocacy group. This year’s undertaking was expanded to 72 donors, including six separate agencies within the U.S. government as well as the first-time publication of an aid transparency report card devoted specifically to the U.S. government, the world’s largest donor.

For the first time, the index awarded a “good” score to two organisations, the World Bank and the U.K.’s aid agency, DFID, meaning that they scored at 80 percent or higher.

Others in the top 10 include the Global Fund to Fight AIDS, Tuberculosis and Malaria, the African Development Bank and the United Nations Development Programme; the aid agencies of the Netherlands, Denmark and Sweden; and the U.S. government’s Millennium Challenge Corporation, a specialised agency that deals only with certain countries deemed highly accountable.

At the other end of the spectrum is China, Hungary, Cyprus, UNICEF (the U.N.’s children’s agency) and, a bit further up, the U.S. Defence Department. The very last place went to Malta, which somehow scored a zero on the index’s transparency metrics.

Overall, multilateral, international agencies fare generally better than national governments on the index, while European groups are also seen as stronger on transparency than are U.S. counterparts (though with notable exceptions for Germany and France).

“Looking at the index, we’re doing only pretty good,” Paul O’Brien, with Oxfam America, an aid agency, says. “If we have another food crisis like we had in 2008, we’re going to have tens of millions drop back into poverty. Many of us in the development field really hear the clock ticking: we’re going to spend a trillion dollars in aid over the next 10 years, and we’ve got to get it right.”

The index itself was launched last year at a high-level U.N. meeting on aid efficiency in Busan, South Korea. There, foreign aid agencies from around the world, including the U.S., agreed not only to begin publishing their aid information but also to do so under a common international standard, known as the International Aid Transparency Initiative (IATI).

According to the index’s rankings, the top 16 countries and agencies are all signatories of IATI. At Busan, there was also agreement on a timeline for this new push for transparency, with full compliance with the new standard by the end of 2015.

The aims of increased aid transparency are multiple, with proponents pointing to significant benefits all along the spectrum from donors to recipients.

“At the end of the day, what we’ve learned is that effective development that actually leads to sustainable outcomes isn’t about (development experts) at all; it’s about institutions on the ground functioning effectively, working with each other,” Oxfam’s O’Brien says.

“And that’s about politics and power more than anything else. The way you transfer power is having the right kinds of information presented in the right way to change the power dynamic.”

He continues: “So why is it the Europeans are doing better than the U.S. in transparency? They didn’t come to transparency as an incidental consequence of trying to improve quality; they came to it as a reason for being.”

The focus on transparency also helps donors to coordinate among themselves.

“If you respect your partners, then you have a website that they can go to, where they can point and click on any country around the world and see what you’re doing,” Donald Steinberg, deputy administrator for the U.S.’s central aid agency, USAID, says.

He notes that the U.S. government is about halfway to that point right now, currently in the midst of building a massive, first-of-its-kind database that collates the roughly 30 billion dollars a year that the United States spends on official foreign assistance. Just last week, the U.S. government released a major directive offering guidance on how exactly it would be bringing itself into full compliance with IATI.

“We’ve already seen tremendous benefit from this,” Steinberg says. “We saw it in the Horn of Africa with the famine situation, where our partners were able to identify where we were doing business and where we weren’t doing business … (offering) additional information on what we should be doing in that space.”

Steinberg and others have also suggested that the aid transparency initiative might already be falling behind the times in its sole focus on major multilateral and bilateral donors. While 50 years ago, development assistance represented 85 percent of the flow of capital to developing countries, today that figure is only around 15 percent, including around a trillion dollars in private-sector investment.