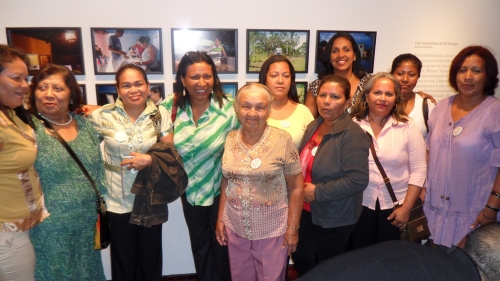 Arely Domínguez, right, and other members of El Guapo at the inauguration of the bankomunales exhibit. Credit: Estrella Gutiérrez/IPS

CARACAS, Oct 2 2012 (IPS) - “We were used to losing, so a group of us said to ourselves: let’s lose something here,” said Carmen Caravallo, describing the start of a “bankomunal”, a self-managed microfinance fund based on investment, in her rural community in eastern Venezuela.

Ten years later, Caravallo and the other members of the bankomunal in Llanada de Puerto Santo, in the state of Sucre, “are getting used to winning,” she told IPS. “Now we are a family, and we have learned to be responsible; we have improved our lives with money that belongs to us, and strange as it may seem, we feel we are very much in charge,” she added.

Bankomunales, present in 14 countries on four continents, are the brainchild of Venezuelan social entrepreneur Salomón Raydán, who demonstrated that the poor can be self-financed, after Muhammad Yunus of Bangladesh, the father of microcredit, had shown that they could be financed.

The 54-year-old Caravallo, who is in mourning after the recent death of one of her three children, said the road has been “slow, hard and paved with mistrust.” But after three years “people began to make a profit, and saw that we were reliable and responsible.”

In her community of 1,000 people, in one of the poorest states in the country, she is treasurer of the local bankomunal, which began with 20 members and now has 107 as well as “a long waiting list to join.”

Similar experiences have been repeated in 180 bankomunales throughout Venezuela, which have a combined total of 25,465 members who contributed a minimum of 2.30 dollars to become both investors and clients.

Raydán, a philosopher and sociologist by training, told IPS the idea was born 15 years ago, out of his experiences as an adviser for small farmer financial assistance programmes and from what he learned about the way of life of poor rural communities.

Poverty is defined by the irregularity of income, more than the lack of it, he said. “Insecure and fluctuating resources do not allow the poor to face spending that is needed for survival, and so poverty takes root,” said Raydán, the head of the Foundation for Rural Finance (FUNDEFIR).

“Eighty percent of poor people in the world have access to credit through informal systems,” mostly self-managed in their communities, he said.

“But these sources are insecure and they do not add value for their users. They need to be adapted to offer more transparency, training, security and efficiency, so they become more formal, although that doesn’t mean they need to be regulated according to the rules of the state that has excluded them,” said Raydán.

These mutual credit associations began to operate in 1997, granting multiple and variable loans, in contrast with traditional systems that make rotating loans of fixed amounts, which are widespread in poor areas of the developing South.

Furthermore, “their members are not just savers, but investors; they are active, not passive,” he emphasised.

“Only 2.5 percent of the poor population of the world has access to banking services, and microcredit systems serve 105 million people, while the demand for microfinance is two billion people,” he said.

Venezuelan microinvestors acquire a certificate of assets worth 2.30 dollars. No one can acquire more than 15 percent of the total assets, members of different bankomunales who have arrived in Caracas for a photo exhibit about the system tell IPS enthusiastically.

Members are the leading lights of the show launched in September in a gallery in the capital city, where powerful images are shown of open-air meetings or gatherings in borrowed spaces – meetings of credit committees and activities involving the granting or payment of loans.

There are also images of members on cultivated land in both rural and urban areas, grocery stores set up in homes, other small shops, home renovations, sewing or repair workshops, and minifactories producing different products. Other members are depicted next to children wearing new school uniforms, or holding up new kitchen utensils.

Credits are granted for “any legal purpose,” in general to be repaid in three to 18 months, with interest decided by each organisation. Loan amounts vary: a new association may only lend up to 100 dollars, while a more established one may have a ceiling of 2,000 dollars.

All decisions are made at well-attended meetings, and the credit committee gives its decision on each request within 24 hours. “We know each other and we know everyone’s payment capacity; we work on trust,” said Arely Domínguez, head of the bankomunal in El Guapo, a village that was reborn from tragedy.

In December 1999 a flood burst the dam near the village, located 125 kilometres from Caracas, in the north-central state of Miranda. The low-lying land in El Guapo, home to some 3,000 people, was flooded.

FUNDEFIR was one of the organisations to come to their aid, and a year later Domínguez and 34 others founded their bankomunal, which now has 117 members and makes an average of 10 loans a week, totalling 6,000 dollars.

First of all, like everyone else involved in the initiative, they received training and advice from FUNDEFIR. “We learned how to balance our accounts, write budgets, do audits, assess risks and use computers,” said Domínguez, a 49-year-old schoolteacher with two daughters.

Up to August, bankomunales had granted 275,631 credits to 84,884 people, for a total 3.6 million dollars at the official exchange rate.

In El Guapo, the bankomunal operates in the building of a cultural association, but most of the associations meet in members’ houses. Officers are elected at general meetings and work on an honorary basis.

The vast majority of members are women, but the number of men is increasing. One-third of loans are requested for consumption, one-third for enterprises and one-third for emergencies, especially health problems.

Every loan is backed up to at least 40 percent by certificates of assets of the member and his or her sponsors, “to be in the safe zone,” a mantra repeated by the members. “There are hardly ever any problems, but on the second default, they are out,” Caravallo said.

Profits are calculated monthly and distributed to the members annually. “One of the principles of bankomunales is distribution rather than accumulation,” said Raydán. “The profits have little economic importance, but a great deal of educational importance.”

It is “a financial education programme, not a microfinance programme, and the profits help generate a sense of entrepreneurship,” he said.

The Spanish version, Comunidades Autofinanciadas, won the 2009 prize for the best microfinance programme in Europe, while FUNDEFIR’s system was voted in 2010 one of the 25 social projects in the world most likely to be globalised, by Ashoka Globaliser, an international foundation that promotes social enterprise.

FUNDEFIR has financial support from Total Oil and Gas Venezuela, a subsidiary of the transnational French oil corporation Total, which works in the east of the country.

Diana Vilera, the sustainable development manager, told IPS the company “seeks to promote projects that are a tool for people to be lifted out of poverty.”

“Oil companies take a lot out of the planet and the environment, and we have a duty to contribute whatever we can, beyond the business angle,” she said.