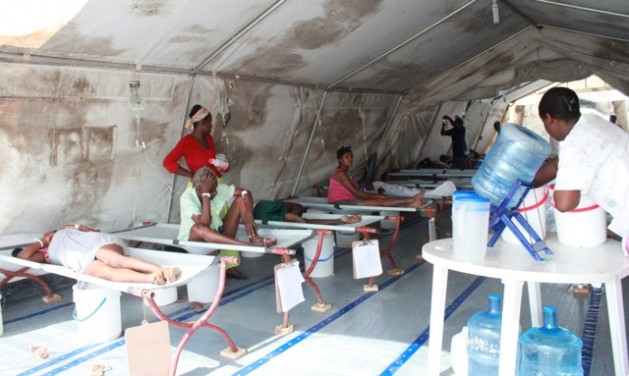 PORT-AU-PRINCE, May 18 2012 (IPS) - As predicted, the beginning of the rainy season in Haiti brought exponential increases in the numbers of people sickened and killed by cholera.

While the number of new cases in December was about 300 per day nationwide, this week one centre in the capital alone reported receiving 95 cases per day. And the numbers are expected to increase.

As of late April, at least 7,112 people had died and over 536,943 been made ill by the deadly water-borne disease first introduced to Haiti by Nepalese peacekeepers 17 months ago. More than one in 20 Haitians has been infected so far.

“Between the first week of April and the last week of April, the number of new patients increased by three-fold” in the capital, Gaëtan Drossart, head of mission for Doctors Without Borders or Medecins san frontières (MSF), told IPS on May 16. “In April alone, we saw over 1,600 patients at the four cholera centres MSF supports in Port-au- Prince.”

One of MSF’s Cholera Treatment Centres or CTCs is located in a residential neighbourhood in the Carrefour section of the metropolitan area. The “centre” is actually 250 cots in a half-dozen sweltering tents. Most of the cots were occupied this week.

A decrease in funding for the fight against cholera, lack of funding for the ministry of health, challenges with coordination and the failure to adequately address the underlying causes of the disease’s spread have meant that Haiti is now enduring one of the world’s worst epidemics in decades.

On May 1, the U.N.’s Office for the Coordination of Humanitarian Affairs (OCHA) put the national fatality rate at above three percent, the highest since the beginning of the outbreak. And the Pan American Health Organization (PAHO) announced that between 200,000 and 250,000 more people will likely contract the disease during the course of 2012.

Cholera has also spread to the neighbouring Dominican Republic. As of May 4, 23,347 had been infected and 399 had died.

Despite the fact that all actors knew this year’s rainy season would bring increased cases, the number of CTCs has dropped precipitously since the outbreak. In January 2011, there were 101 centres nationwide. Today there are only 30.

The number of actors has also dropped.

MSF is one of the handful of large non-governmental organisations (NGOs) still involved in the fight against cholera. The French organisation has fielded about one-third of all cases since the outbreak began, according to their figures.

Many of the NGOs who first heeded the call when the disease struck are today long gone. According to a recent study by the Washington-based Centre for Economic and Policy Research, the number of NGOs working on cholera dropped from 128 in January 2011 to just 48 only six months later.

“Citing lack of funds for cholera activities, they have downsized, disappeared, or retreated, handing off their activities ‘to the government,’” explained Dr. Louise Ivers of the U.S.-based NGO Partners in Health (PIH) last July.

Noting that the ministry of health budget is “miniscule”, Ivers said that in reality, that “hand-off” has meant that the NGOs still working – PIH, MSF and several others – have had to fill in the gaps as best they could.

Interviewed in February about the “hand-off,” the ministry’s Dr. Claude Surena admitted the government “doesn’t have the means to handle the CTCs”.

“Everyone knows that even before the cholera outbreak, the ministry of health had a lot of challenges: not enough personnel, they were poorly apportioned across the country and salaries are not paid regularly,” MSF’s Drossart said this week.

Indeed, at many of the CTCs run by the government, staff and community outreach workers have not been paid in months. For example, at the only CTC for Gonaives, one of Haiti’s largest cities, 12 of 15 employees haven’t been paid in for the past four months.

The budget for Haiti’s ministry of health is very small compared with its neighbours. In 2009, the World Health Organization determined that total spending on health in Haiti per capita was 71 dollars. For the Dominican Republic, the figure was 495 dollars. For Jamaica it is 383, and for Guatemala, 337 dollars.

More significantly, almost all of the humanitarian money slated for the cholera fight has been given to non-government actors.

A recent survey by Partners in Health showed that of the estimated 140 million dollars donated and spent in 2010 and 2011 on setting up and staffing CTCs, and on prevention through initiatives like outreach and the distribution of soap, and chlorine tablets, only about five million went to the government. The U.S. government, which disbursed about 50 million, gave zero dollars to the Haitian government.

“Only one third of Haiti’s health services are being delivered in the public sector,” the survey’s authors noted. “Rather than creating private, parallel service delivery systems that drain resources from the public sector, donors and NGOs should work closely with the Government of Haiti…

“(The) funding needs are vast and include resources for hiring, training and retaining staff; providing essential supplies, medicine, and equipment; removing financial barriers for the poor; and renovating and operating dilapidated clinics and hospitals.”

But so far, the money has been slow in coming.

“I think everyone is aware of when the new government established its priorities, it talked about the four Es (economy, education, employment, environment) but no H (for health),” the doctor said.

Moving away from a band-aid approach

At the same time, all actors recognise that humanitarian emergency funding and emergency work have their limits.

“We are still dealing with this on an emergency basis, meaning, the money comes when there’s an emergency, and then when the worst is past, the money stops,” MSF’s Drossart explained. “Prevention is important, water, sanitation, hygiene, these are all important things that require continual funds and continual attention.”

In a May 3 interview with the UN News Centre, Fisher recognized that ” (a)s humanitarian actors facing cholera what we are doing is sort of patchwork, band-aid work.”

Fisher added that the humanitarian work is in the end “short-term” and that the long-term solution lay in “investment in improved drinking water sources and in waste management”.

According to PAHO, cost estimates for building adequate water and sanitation systems for “have ranged from 746 million to 1.1 billion dollars.” Last January, PAHO joined with the U.S. Centres for Disease Control, UNICEF and the World Health Organization to call for a “cholera-free Hispaniola”.

One crucial step, the groups said, was “a detailed plan and timeline for water, sanitation, and hygiene infrastructure”.

*Betty Désir and Haiti Grassroots Watch contributed to this report.