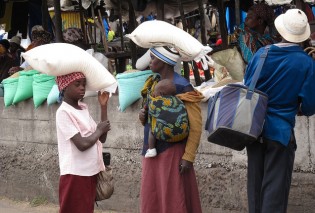 By Bryant Harris
As the World Bank wrapped up its semi-annual joint meetings with the International Monetary Fund (IMF) here last weekend, it reaffirmed its commitment to bringing extreme poverty below three percent of the global population by 2030 while increasing the income of the poorest 40 percent of the population of each country.

By Bryant Harris
U.S. Attorney General Eric Holder and several key Republican and Democrat senators agree on the need for criminal justice reform, and some are now even seeking to restore voting rights to former felons.

By Bryant Harris
Advocacy groups and some legislators are calling on the U.S. government to mandate an increase in corporate supply chain transparency, with the aim of cutting down on the estimated 14,000 to 17,000 people trafficked into the United States each year and the tens of millions enslaved globally.

By Bryant Harris
As the fourth anniversary of the devastating earthquake in Haiti approaches on Jan. 12, development analysts are decrying an ongoing lack of transparency in U.S. foreign aid to the country, even as those assistance streams are drying up.
ADVERTISEMENT ADVERTISEMENT