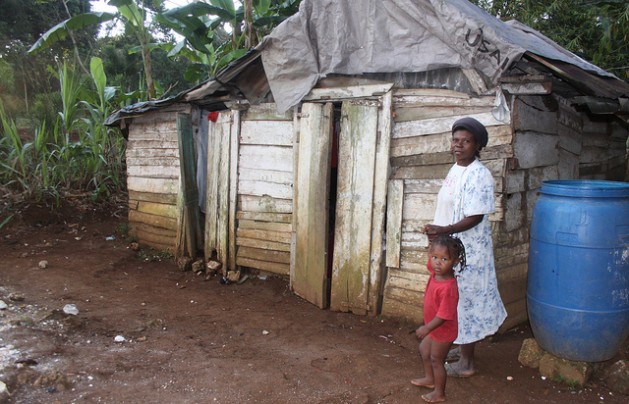 WASHINGTON, Jan 10 2014 (IPS) - As the fourth anniversary of the devastating earthquake in Haiti approaches on Jan. 12, development analysts are decrying an ongoing lack of transparency in U.S. foreign aid to the country, even as those assistance streams are drying up.

From what is known of U.S. post-earthquake funding to Haiti, it appears that a notably small proportion of money from USAID, the county’s main foreign aid arm, is going directly to local Haitian businesses, institutions and organisations.

“Sixty percent [of USAID funds] goes to firms operating inside the beltway, disappearing in a black box.” -- Jake Johnson

“Sixty percent [of USAID funds] goes to firms operating inside the beltway, disappearing in a black box,” Jake Johnson of the Centre for Economic and Policy Research (CEPR), a Washington think tank, told IPS. “That makes it very hard to determine how and when the funds reach the ground.”

Even though the United States offered three billion dollars in aid for Haiti after the earthquake, less than one percent of the 1.3 billion dollars in obligated USAID funds – money designated specifically for Haitian recovery efforts – has gone directly to local Haitian groups.

“When so little of the funding reaches Haitians themselves, it takes them out of the decision-making process and ensures that aid programmes are not actually responsive to the needs of people on the ground,” Johnson says.

He believes that aid money can often be better utilised in post-emergency situations if donor governments ensure a high level of transparency around those assistance flows, and if they direct as much of these funds as possible towards developing new industries.

A USAID official accounts for these apparent discrepancies by noting that “part of the challenge of making more awards directly to Haitian entities – public and private – has been that few of them have the internal financial controls in place to ensure compliance with U.S. government terms and conditions.”

The official told IPS the agency is trying to address this impediment by working directly with Haitian organisations to build their “financial control capabilities”, as well as to educate them about USAID procurement procedures and provide them with financial services.

“Many USAID-funded partners already work with numerous Haitian NGOs – more than 400 – through contractor and grantee sub-awards as well as arrangements with local vendors.”

Half of the data is missing

So if less than one percent of USAID funding has gone to Haitian groups, where has the rest of this money been directed? The lack of funding transparency makes it impossible to know for sure.

“Reports on contractors are not actually done according to the Office of Inspector General for USAID,” says Johnson.

USAID’s primary contractors are required to report on their subcontractors’ activities, and this data in turn is supposed to be made public. “But this information is nowhere to be found,” Vijaya Ramachandran, a senior fellow with the Centre for Global Development (CGD), a Washington think tank, wrote this week.

The USAID official told IPS that “all reported subcontract and sub-award information is published publicly” through a government website. But Ramachandran asserts that “almost half of the transactions data” are missing important data that identify individual vendors.

Lawmakers have noticed similar problems. Legislation passed the U.S. House of Representatives in mid-December that would require a government audit of U.S. assistance in Haiti. (That bill is currently awaiting a vote in the Senate.)

USAID gave seven of the 10 largest contracts for operations in Haiti to Chemonics International, a for-profit provider that Johnson says is the largest USAID contractor in the world. Chemonics’s two largest projects in Haiti include the WINNER Project and the Office of Transitions Initiative, which Johnson describes as “the more political arm of USAID”.

The project was designed to provide aid to countries afflicted by natural disasters or political turmoil, and following the earthquake it immediately provided disaster relief for displaced Haitians.

Nonetheless, the public is unable to ascertain how Chemonics spent the vast majority of its multi-million-dollar contracts in Haiti due to USAID’s lack of oversight reports.

“The [USAID] inspector-general found that Chemonics regularly runs short of its goals and over its budget,” CEPR’s Johnson says. “This is typical, but it’s become particularly evident in Haiti because of the earthquake.”

In addition to development and reconstruction aid, Washington is also seeking to assist Haitian recovery efforts by strengthening the country’s garments industry. Doing so, however, has presented a different set of challenges.

Following the earthquake, USAID partnered with the Clinton Foundation, the Inter-American Bank and Sae-A Trading, a Korean textile manufacturer, to construct the Caracol Industrial Park. Although the agency predicted that the complex would create up to 65,000 jobs, media reports suggest that as of last September the park had created fewer than 1,500 jobs.

Furthermore, although the project’s financers gave hundreds of small-scale farmers 3,200 dollars each to vacate their land for the complex, 95 percent of that land today reportedly remains inactive. Meanwhile, Haitian garment factories, including Caracol Park, are said to be openly flaunting minimum wage laws by paying their employees a mere 4.56 dollars a day, rather than the 6.85 dollars per day stipulated by the government.

Other U.S. attempts to bolster the textiles sector have started out more strongly, but been beset by pre-existing measures.

In the aftermath of the 2010 earthquake, the U.S. Congress passed the Haiti Economic Lift Programme (HELP) Act in the hopes of stimulating the country’s economy by boosting apparels exports, long a cornerstone of Haitian industry. Haiti’s clothing exports to the U.S. have indeed risen by 25 percent since 2009, creating 30,000 jobs, a number that is expected to double by 2016.

Because Haitian apparel imports into the United States are restricted based on a rule of origin, however, certain types of clothing imports over a certain quota must be produced using U.S. materials. These measures are designed to benefit the U.S. textile industry.

Although the HELP Act partially ameliorated these complex trade restrictions, the quotas and tariffs that the United States places on the Haitian apparel industry continue to inhibit trade-based economic growth.

The CGD’s Kimberly Elliot told IPS that U.S. red tape on Haitian imports today consists of a “complex maze of caps and rules of origins. That’s unlike the European Union, Canada and Japan, all of which have simplified restrictions on rules of origins for states that the U.N. designates as least-developed countries.”

She calls the rule of origin a “burden” for Haiti and argues that if U.S. trade restrictions were less complex, post-earthquake Haitian trade would have a greater potential for growth.