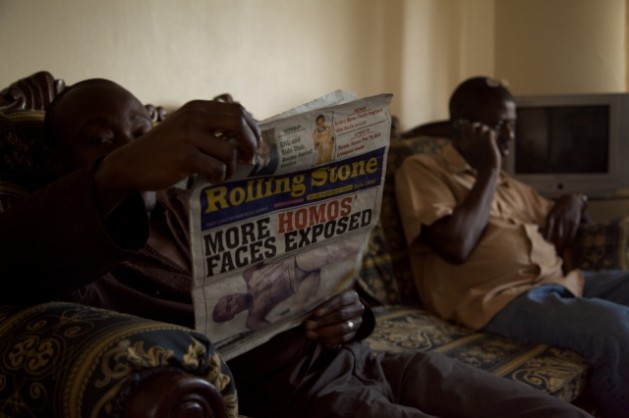 A scene from the award-winning documentary "Call Me Kuchu", which follows the fight of courageous LGBT rights activist David Kato and his friends against the rampant homophobia in Uganda. Credit: Katherine Fairfax Wright

While the new law no longer provides the death penalty for LGBT people, as it did when parliament first introduced it, it escalates existing penalties on homosexuality, allowing the state to imprison people for life if they engage in “aggravated homosexuality,” defined as repeated instances of gay sex between consenting adults or acts involving minors, disabled, or HIV-positive people.

Lively claimed that gays were responsible for the Holocaust and the Rwandan genocide, and asserted that they were now targeting Uganda by trying to “convert” Ugandan children.

The European Union, the United Nations and the Catholic Church have all strongly condemned the new law, which escalates existing penalties for homosexuality.

“Now that this law has been enacted, we are beginning an internal review of our relationship with the Government of Uganda to ensure that all dimensions of our engagement, including assistance programmes, uphold our anti-discrimination policies and principles and reflect our values,” U.S. Secretary of State John Kerry announced Monday.

Some European countries, including Norway, Denmark and the Netherlands, have already halted financial aid to Uganda in protest, while others, like Austria and Sweden, are similarly reviewing their aid commitments. Prominent U.S. policymakers are calling on the United States to temporarily cut off the 456.3 million dollars in aid to Uganda that Congress has appropriated for the coming fiscal year.

“We need to closely review all U.S. assistance to Uganda, including through the World Bank and other multilateral organisations,” U.S. Senator Patrick Leahy said Tuesday. “I cannot support providing further funding to the Government of Uganda until the United States has undergone a review of our relationship.”

Ugandan health and sanitation programmes in particular rely on foreign aid support, especially when it comes to combating HIV/AIDS. Uganda has an HIV prevalence rate of 7.2 percent, a rate that is roughly doubled for men who have sex with men.

“We are also deeply concerned about the law’s potential to set back public health efforts in Uganda,” Kerry said, “including those to address HIV/AIDS, which must be conducted in a non-discriminatory manner in order to be effective.”

As the new Ugandan law prosecutes organisations aiding LGBT individuals, a high-risk group for HIV transmission, Uganda’s actions could have an adverse affect on Ugandan organisations that partner with and receive funding from PEPFAR, the United States’ flagship anti-AIDS programme.

“From a purely operation standpoint … we know that the law itself has specific ramifications for PEPFAR assistance,” Timi Gerson, the director of advocacy for American Jewish World Service (AJWS), a development organisation with operations in Uganda, told IPS. “They’re going to have to look at how this law is going to impact its ability to run those programmes.”

Gerson is hesitant about freezing all aid to Uganda, however.

“AJWS doesn’t support the cutting of fundamental aid to those countries. We don’t support stopping aid to ordinary Ugandans,” she said.

“I wouldn’t talk about cutting aid, I would talk about shifting aid. I think the real question is how you would do that on the ground in light of the situation, so that has to be first and foremost in the [U.S.] review.”

Some pro-LGBT advocates are more ambivalent about U.S. aid funding in Uganda, however. They point to an unacceptable trend of U.S. funding being administered by socially conservative Christian groups that have long espoused an anti-LGBT agenda, creating an environment where anti-LGBT legislation enjoys widespread support.

U.S. funding often ends up in the hands of conservative religious groups via a complex system of grants, sub-grants and further sub-grants awarded by sub-grantees.

“[The conservatives] are doing a lot of excellent work when it comes to services like orphanages and very good, well-funded schools,” Rev. Kapya Kaoma of Political Research Associates, a social justice advocacy group, told IPS.

“The conservative schools have very good libraries, unlike other schools, but have books that present a conservative angle regarding Ugandan politics. That is an advantage for them.”

Kaoma noted that organisations headed by people like Martin Ssempa, a vehemently anti-LGBT Ugandan pastor, have received 60,000 dollars in sub-grants from organisations receiving U.S. PEPFAR funds. (Ssempa also opposes the use of condoms.)

“I hear these calls to suspend aid and I am conflicted about that,” said Kaoma. “I don’t think that’s the best way to go, as suspending aid only hurts the poor and not the rich. Museveni won’t lose a single thing.”

Instead, he advocates sanctions on Ugandan individuals responsible for the law – and on U.S. evangelicals who he says have fuelled Uganda’s anti-LGBT movement.

“The alternative is selective sanctioning targeting the people who are responsible, all the anti-gay speakers,” he said.

“If they can be sanctioned, there can be a law that says no money can move from any U.S. organisation to an [anti-LGBT] group in Uganda – then they will start feeling the pinch. If they cut aid, it could just increase hatred against LGBT people as retaliation.”

In March 2009, Lively held a conference for Ugandan political, clerical and civic elites, where he spoke to them about the “gay agenda”. Lively claimed that gays were responsible for the Holocaust and the Rwandan genocide, and asserted that they were now targeting Uganda by trying to “convert” Ugandan children.

The Centre for Constitutional Rights, a U.S.-based watchdog, is currently representing Sexual Minorities Uganda, a Ugandan LGBT advocacy group, as it sues Lively in a U.S. court for his alleged influence on the legislation.

Lively has conducted similar anti-LGBT activism throughout Africa as well as in Ukraine and Russia.