KAMPALA, Dec 10 2009 (IPS) - Uganda will be going back to the days of the Idi Amin regime if it passes a Bill which will arrest or kill people for being gay or lesbian and for repeatedly engaging in homosexual sex, say rights activists. 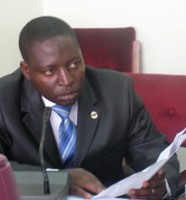 “This is a form of targeted killings similar to Idi Amin. We already have a law on homosexuality but you see people like David Bahati, instead of concentrating on more pressing issues in his constituency, he is spending time to write a forty-page document aimed at gays and lesbians,” said Jacqueline Kasha, a lesbian Ugandan human rights activist.

Rights activists say the Bill, which has stirred local and international controversy, could in effect exile close to half a million lesbian, gay, bisexual and transgendered (LGBT) Ugandans who would most likely flee the country to escape prosecution. There are no official figures of the number of LGBT people in Uganda because the question on one’s sexual orientation is not part of the past national census questionnaire.

“In simple terms this Bill is saying: ‘Go out of Uganda’. An even if I ran out of the country definitely I will have to be brought back. It violates all aspects of a human being and human rights,” said Kasha.

A person commits the offence of aggravated homosexuality where the:


She says the clause seeking extraterritorial jurisdiction, once enacted as it is, would be used by government to have LGBT persons extradited so as to face prosecution in Uganda.

Practising homosexuality has been illegal in Uganda and is listed in the penal code, but the proposed Bill has expanded on it.

The proposed Bill, currently being considered by the Ugandan parliament, suggests a new offence of “aggravated homosexuality”, which would be punishable by death.

This part of the Bill states that “repeat offenders” of homosexuality are liable to get the death penalty. The death penalty is also applied in a homosexual relationship if a partner is under 18, or has a disability, or is HIV-positive. People accused under the aggravated homosexuality clause will be forced to undergo an HIV test.

It also requires that Uganda withdraw from any international treaty, conventions, protocols and declarations that would support homosexuality.

David Bahati the Ndorwa West minister of parliament in Uganda, with support from some faith-based groups in Uganda, introduced the Anti-Homosexuality Bill in mid-October. He said it was aimed at, among other things, to protect traditional family values.

Bahati told IPS that his Bill has received wide support within parliament and he was confident that it will be enacted, despite the controversy it has created internationally. He lashed out at human rights activists opposed to the Bill saying they were using just one clause to campaign against his Bill.

“There have been attacks from gays and their sympathisers and our (Uganda’s) donors have put pressure on government. They have used the suggested clause on aggravated homosexuality, which was an import from already passed act on defilement, to alarm people that the Bill is about killing gays. This is a distortion of facts,” he said.

Even Uganda’s long-serving president, Yoweri Museveni, lent his support to the Bill. He claimed “European homosexuals were recruiting in Africa”. While addressing youth in Kampala last month, Museveni sent a strong signal that his government was determined to pass the Bill despite local and international condemnation, including opposition from many of Uganda’s Aid donors.

“I hear European homosexuals are recruiting in Africa. We used to have very few homosexuals traditionally. They were not persecuted but were not encouraged either because it was clear that is not how God arranged things to be. So you should reject it because homosexuality is unnatural,” said Museveni.

Clauses three to six of the Bill introduces offences of engaging in homosexuality and penalties of imprisonment upon conviction. The Bill also introduces penalties for: acts that promote homosexuality; failure to report the offence; and imposes a duty on communities to report suspected cases of homosexuality.

Solome Kimbugwe Nakawesi, an activist with Akina Mama Wa Afrika (AMWA), a women’s development organisation said: “By penalising citizens for failing to report ‘suspected homosexuals’ to the authorities, the Bill calls for the creation of a fascist-style society where family members, service providers and colleagues are made to spy on each other.”

Gerald Sentongo, an Administrator with SMUG told IPS the Bill meant families members would be arrested for not reporting a LGBT family member. “This Bill is so inhumane when it passes as law. It involves everybody, my mother, my neighbour, my lawyer. They know that I’m gay but if they don’t report me they get arrested. So how will someone (know) about my sexuality unless he comes to my bedroom?” Sentongo asked.

The Citizen’s Coalition on Human Rights and Constitutional Law (CHCL) compared the Bill to the situation in apartheid South Africa. “The last time this was done was in the era of Idi Amin where everyone very quickly became an enemy of the state, it amounts to direct invasion of our homes, and will promote blackmail, false accusation and intimidation,” the CHCL said.

“Have we already forgotten the sex police of apartheid South Africa who smashed their way into people’s bedrooms in an attempt to prevent inter racial sex?” asked Dr. Sylvia Tamale, during a public debate. Tamale, a Law Lecturer at Makerere University said the Bill, once enacted in its current form, will have wide ranging social implication.

“Homosexuality is defined (in the Bill) in such broad fashion to include “touching another person with intention of committing homosexuality”. This is a provision highly prone to abuse and puts all citizens (both heterosexual and homosexual) at risk,” she said.

Tamale said Clause 13 of the Bill, which attempts to outlaw “promotion of homosexuality”, would introduce widespread censorship and undermines fundamental freedoms such as the rights to free speech, expression, association and assembly.

She said the Bill also seeks to criminalise “funding and sponsoring of homosexuality and related activities”. This, she said, would be a major blow to Uganda’s public policies especially those in the fight against HIV/AIDS.

Rubaramira Ruranga, the executive director of the National Guidance and Empowerment Network of people living with HIV/AIDS in Uganda, said: “The best thing is not to imprison homosexuals. We need to have them treated and also educate them about the prevention strategies because criminalisation causes stigma, discrimination and denied knowledge on HIV/AIDS and its treatment.”

Livingston Sewanyana, an anti-death penalty activist with the Foundation For Human Rights Initiative said they oppose the Bill because it suggests the death penalty for the offence of aggravated homosexuality. Sewanyana pointed out that it would be hard for government to enforce or regulate against some of the rights enjoyed in privacy.

Uganda Law Reform Commission Chairperson, Justice Seth Manyindo told IPS that his commission was initially not involved in drafting of the Bill but is now getting interested, given the human rights concerns.

“It is a question of human rights. Those who advocate international human rights say it should not be accepted, but Uganda has a right to legislate,” he said. The Uganda Law Commission is tasked to study and keep under constant review the Acts and other laws of Uganda. The commission makes recommendations for their systematic improvement, development, modernisation and reform with particular emphasis on the removal of anomalies within Ugandan laws.

However, the Anti-Homosexuality Bill was not presented to the commission. “That Bill is not a government Bill. So were not involved in the process of initiating it. We work on government Bills but even drafters of private member’s Bills are free to consult us but this time they didn’t,” he pointed out.

The Bill, currently being considered by the presidential affairs committee of parliament, has generated diplomatic criticism from some of Uganda’s donors. Sweden has even threatened to withdraw aid to Uganda.

Sweden’s development assistance minister, Gunilla Carlsson, was quoted by Swedish Radio: “I am doubly disappointed, partly because Uganda is a country with which we have had long-term relations and where I thought and hoped we had started to share common values and understanding. “The law is wretched, but it’s also offensive to see how Ugandans choose to look at how we see things, and the kind of reception we get when we bring up these issues.”

But Uganda’s ethics and integrity minister, James Nsaba Buturo, has from the onset insisted that his country will not bow down to pressure, even from what he called “development partners” who wished to withdraw their support.

In an earlier interview with IPS he said the uproar surrounding the Bill as a positive sign that Uganda is “providing leadership” to the world.

But the world does not seem to agree. Canadian prime minister, Stephen Harper, described the Bill as “vile and hateful”.

The outcry against the Bill was also prominent at the recent Commonwealth Heads of Government Meeting in Trinidad and Tobago. Activists at the meeting demanded that Uganda be suspended from the Commonwealth for acting contrary to Commonwealth principles.

There is also mounting pressure from United Nations agencies in Uganda asking Bahati to withdraw the Bill or revise some of its contents. UNAIDS country coordinator in Uganda, Musa Bungundu, confirmed to IPS that he has personally had discussion with Bahati expressing reservations about the Bill.

“We are advocating of how we can come out of these challenges without affecting the HIV/AIDS prevention. What we are saying if such a Bill is passed, it can have a negative impact on HIV response,” said Bungundu.

The strong support of the Bill from Museveni has left Ugandans concerned. And unless something is done to prevent the Bill from becoming law, many may be forced to flee their country.

Frank Mugisha, an activist with Sexual Minorities Uganda (SMUG), told IPS that the Bill will force him into exile once enacted in its current form. “I have never really considered moving out of Uganda. But if I cannot work within the country, then I will have to leave,” he said.

Meanwhile, Ugandans have to wait and see if their parliament supports the passing into law of the Bill.