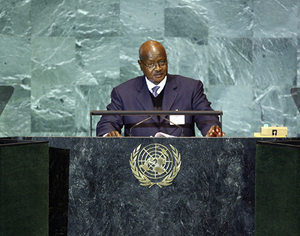 According to the press statement from department spokesperson Victoria Nuland, the government placed opposition leader Kizza Besigye under house arrest two times in October and arrested dozens of civil society activists in the same period, charging some of them with treason. The statement says the Ugandan government has “failed to respect freedoms of expression, assembly, and the media”.

Release of the statement was an unusual move, as State Department criticism of allies is usually issued in response to questions from reporters. This statement, however, was volunteered.

Also on Wednesday, Radio Netherlands Worldwide reported that in Uganda a mob of 20 people, believed to be linked to the government, stormed Besigye’s house in the village of Kasangati. Skirmishes between the “alleged state agents”, supporters of Besigye’s FDC party, and villagers left 12 people injured.

Besigye is a well-known figure in Uganda. The politician, who has lost to Museveni three times, started a “walk to work” protest campaign in the spring in which he walked down the street with several dozen supporters to bring attention to soaring food and fuel prices.

The symbolic “walk to work” campaign gave momentum to other anti- government protests that broke out in Kampala, Uganda’s capital, in April and May. It was during those protests, according to the State Department’s statement, that “Ugandan security forces killed at least ten civilians, including a two-year old girl, while attempting to disrupt peaceful protests against rising prices.”

Bisigye was arrested this spring in what many said was an attempt by the government to silence criticism of President Yoweri Museveni, who has been in power in Uganda for 25 years.

According to the statement, the Ugandan government’s proposed legislation “specifically references meetings where participants discuss government principles, policies, and actions, and appears to target opposition and civil society organizations critical of the government”.

The U.S. State Department’s urging of Uganda to protect its citizens’ human rights comes less than a month after the Barack Obama administration sent in about 100 “advisory” U.S troops to help the Ugandan government track down the remnants of the Lord’s Resistance Army (LRA).

The move was approved this spring by Congressional legislation backed by both Republicans and Democrats, as well as many humanitarian and human rights groups, that had expressed outrage at reports of recent massacres and other depredations carried out by the LRA in the northeastern region of the Democratic Republic of Congo (DRC) and the Central African Republic (CAR).

Restrictions in Uganda already in force

Scott Edwards, advocacy director for Africa with the London-based Amnesty International (AI) U.S. section in Washington, told IPS that a de facto ban on public assembly has been in force for months, with arrests continuing throughout the summer and fall.

“We are very concerned about the blanket ban on public assembly that we have seen from the government,” Edwards told IPS. He said AI was concerned about “a steady increase” in repression of peaceful assembly and expression. “In terms of realities on the ground, the legislation would just be cover for what is already occurring.”

The State Department’s statement comes just one day after AI on Tuesday released a lengthy report on human rights violations Uganda citing widespread repression of freedom of expression and freedom of assembly in the country.

“The official response to public protests over rising costs of living involved the widespread use of excessive force… the imposition of restrictions on the media and attempts to block public use of social networking internet sites,” the report says.

Edwards also told IPS that reports out of Uganda indicate that a draft law that would legislate criminal penalties as severe as the death penalty for members of Uganda’s gay, lesbian, bisexual, and trans-gender (LGBT) community – a law that had been tabled under international scrutiny – would be reintroduced.

He said the bill, which would ramp up penalties for being gay, which is already illegal in Uganda, could be re-introduced as early as next week.

Human rights organisations and governments around the world have vocally condemned the bill and voiced concerns that it could lead to more violence against Uganda’s LGBT community.

In a tragic case of anti-gay violence in Uganda that received attention around the world, gay rights activist David Kato was violently murdered in January. He had received death threats since being outed by a Ugandan newspaper in 2010.

Edwards said government actions repressing peaceful assembly and journalists, combined with the judicial assault on a particular group “creates a very dangerous atmosphere, not just in terms of proposed legislation, but in the day to day lives of people on the street who may be targeted because of their identity.”

Frank Mugisha, a 29-year-old LGBT activist who has been a vocal advocate for the rights of Uganda’s sexual minorities, is set to receive the Robert F. Kennedy Human Rights Award in Washington in November.