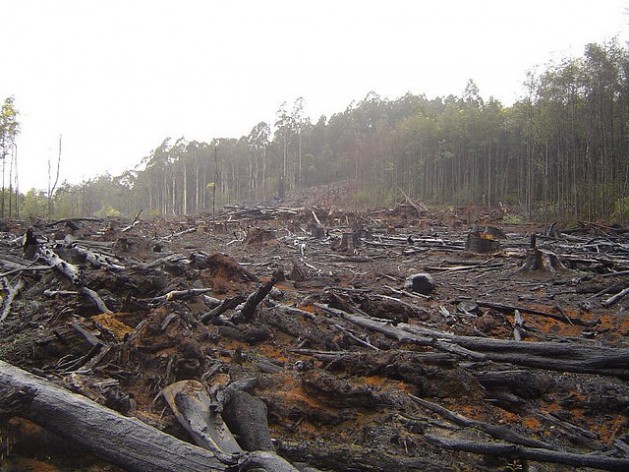 The data from GFW will provide details about the operations of large corporate suppliers, some of whom engage in illegal timber harvesting. Credit: Crustmania/ CC by 2.0

WASHINGTON, Feb 21 2014 (IPS) - A new website launched Thursday will allow governments, businesses, civil society and private citizens to monitor near real-time loss and gain in forest cover in every country around the world.

On Thursday, the World Resources Institute (WRI), a think tank here, together with Google and more than 40 other partners launched an early version of a project they’re calling Global Forest Watch.

“You can’t solve problems that you can’t see." -- Rajiv Shah

“To be able to point to this tool, to look at data, is really, really important,” Kerri-Ann Jones, the U.S. assistant secretary of state for oceans and international environmental and scientific affairs, told IPS.

“President [Barack] Obama’s administration is committed to science-based policy, and when you can have real-time data and you can talk about changes on the ground … it’s going to have a very profound effect on our policy dialogue with partners around the world.”

Because GFW is free and publicly accessible, its partnering organisations hope it will enable private individuals to act as “citizen scientists”, able to exert public pressure on governments and businesses to implement eco-friendly policies and sustainable timber harvesting.

GFW can provide users with alerts via e-mail and text in multiple languages. It is also designed to allow users to upload and share its images over social networks, which organisers hope will help concerned citizens form advocacy groups.

The data from GFW will provide details about the operations of large corporate suppliers, some of whom engage in illegal timber harvesting.

On Thursday, USAID Administrator Rajiv Shah noted that the data will shed light on these suppliers and allow his agency to work with foreign businesses to lessen the effects of deforestation in highly susceptible areas.

“You can’t solve problems that you can’t see,” Shah told IPS. “And now that we can see where deforestation is happening as it links into these specific supply chains, we will also target our programming and our funding to those communities to reduce the level of deforestation that’s taking place in the areas where it’s most acute.”

In addition to lumber, foreign suppliers often rely on rainforests to procure goods like palm oil, a popular additive in processed snack food.

A report from the Rainforest Action Network, an advocacy group, found that the Kellogg Company, a U.S. food manufacturer, relies on palm oil suppliers whose activities contribute to widespread destruction of Indonesian and Malaysian rainforests, severely threatening their indigenous inhabitants and endangered species like orang-utans.

In the face of public criticism, Kellogg announced on Feb. 14 that it would strengthen its standards for its palm oil suppliers to ensure more sustainable harvesting practices.

Palm oil also happens to be one of the industries that the U.S. government is targeting in its fight against deforestation.

“We have a goal that is precise and focused: ending tropical deforestation in palm oil, beef, soy, and pulp and paper,” said USAID Administrator Shah.

Indonesia is particularly susceptible to deforestation, both for its palm oil and other natural resources. On Wednesday, an Indonesian court sentenced a police officer to two years in prison and a 4,000-dollar fine for illegal logging.

However, the Environmental Investigation Agency (EIA), a watchdog group, argued that the sentence was too light as the court acquitted the officer of laundering 127 million dollars, some of which is thought to be connected to the illegal timber shipments. The EIA believes this serves as evidence of Indonesia’s reluctance to take on corruption and illicit activity in the forestry sector.

On Thursday, a demonstration of the GFW website revealed illegal encroachment on protected rainforest land in Indonesia in addition to a national park in Cote d’Ivoire.

“[Indigenous communities] can see exactly what’s happening when and where, and perhaps even take a guess at who might be doing it,” said the WRI’s Nigel Sizer during the presentation. “So this supports dramatic improvements in enforcement and awareness across the world.”

Some companies, such as Unilever and Nestle, have already committed to deforestation-free supply chains, and say they plan to use GFW to help identify suppliers who do not comply with their policies.

“Global Forest Watch is a major step forward and to have data in near real-time is absolutely new,” said Duncan Pollard, a Nestle official. “It is going to change the way we do business.”

As demand for goods such as palm oil has expanded, their procurement has contributed to the drastic increase in the rate of global deforestation over the past century.

Although the rate has slowed considerably over the past 10 years due to local and international preservation efforts, the U.N. Food and Agriculture Organisation (FAO) reports that the world still lost an estimated 2.3 million square kilometres of forest between 2000 and 2012. That is the equivalent of losing 50 football fields a day, or an area roughly the size of Costa Rica every year.

Scientists have shown that rapid rates of deforestation have profound impacts on the accessibility of food, medicine and water, as well as on biodiversity and global climate change.

“Forests are home to more than half of all species in the world. Forests provide employment and water for over a billion people. Forests sequester 45 percent of all of the carbon in the world, so [they] play a central role in our challenge against climate change.”