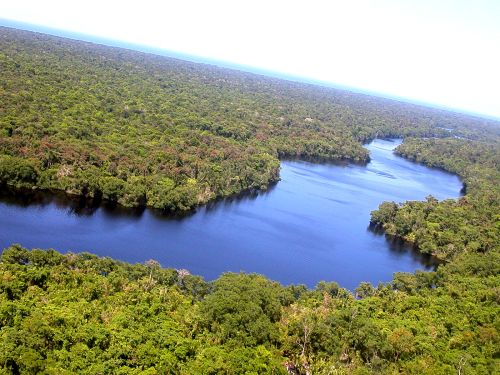 GUATEMALA CITY, Dec 17 2012 (IPS) - “Many tourists come to this area for bird watching, but the terrible deforestation is leading to the disappearance of so much of our flora and fauna. The cleared land is used for cattle ranching,” said Haroldo Figueroa, who works as a guide in nature reserves along Guatemala’s Caribbean coast.

The statistics bear him out. The province of Izabal along Guatemala’s northeast Caribbean coast is one of the areas with the highest deforestation rates in the country, according to two government studies on forests, covering the 1991-2001 and 2006-2010 periods.

Forests in that province shrank from 373,000 hectares in the 1991-1993 period to just over 264,000 hectares in 2010, according to the two studies carried out by the National Institute of Forests and the National Council on Protected Areas, with the support of two private universities: Valle de Guatemala and the Jesuit-run Rafael Landívar.

“Deforestation is caused by people or landowners who don’t take into account the consequences that it has on global warming, fishing and tourism,” Figueroa told IPS. “And whoever has money can do whatever they want here.”

There are 12 nature reserves in Guatemala’s Caribbean coastal region, which local communities depend on for their survival because of the water, firewood, fish, wild fruits and nuts, and opportunities for tourism business activities provided by the jungle areas.

One of the protected areas is Punta de Manabique, declared a wildlife refuge by Congress in 2005. It is home to innumerable species of coral, fish, crustaceans, shellfish, birds, and mammals.

The 43-km Dulce River runs through the 151,878-hectare refuge, which is one of the most important coastal marine wetland systems in Central America.

Since 1955, the Dulce River National Park has been a sanctuary for species like the manatee – a large aquatic herbivorous marine mammal also known as the sea cow. The Chocón Machacas Protected Biotope was created within the park to protect one of the last remaining habitats of the endangered Caribbean manatee (Trichechus manatus).

The 47,500-hectare Cerro San Gil Protected Spring Reserve, whose 19 rivers supply more than 50,000 people in surrounding communities with water, is also found in the province of Izabal.

But deforestation is a major problem in the province, and is hurting the livelihoods of local communities.

According to the most recent data, from the 2011 National Survey on Living Conditions, 54 percent of Guatemala’s 15 million people are poor, and 13 percent are extremely poor, mainly in rural indigenous areas.

“The loss of these resources is irreparable for the country in terms of production, because these forests offer environmental goods and services, such as water, that are vital to the population,” activist Walter Chávez with the Foundation for Ecodevelopment and Conservation, a local NGO, told IPS.

“The forest provides protection for the riverbanks in the face of catastrophic climate events,” he said. “Our country is at high risk of the effects of climate change, and the deforestation is increasing our vulnerability and destroying one of our most important barriers.”

Chávez said the deforestation affecting Izabal and threatening the province’s nature reserves was caused mainly by cattle ranching and “the profits it represents.”

“People think a forested area has no real value. That is sheer ignorance, but it is one of the idiosyncracies of the people who live in the area,” the environmentalist said.

He said there were mechanisms for protecting forests, such as the government’s Forest Incentives Programme, which fosters reforestation by means of economic compensation. But he pointed out that the programme “is voluntary.”

Chávez said the state presence in the protected areas “is very limited, and there is no specific prosecutor’s office to follow up on reports of destruction of our forests.”

“The only thing you see back there are cattle ranches,” the owner of a small local hotel, Carlos Bartolomé, told IPS. “I have no idea if there are any controls, or how things are managed. I suppose they cut down trees to plant pasture for their livestock.”

“Deforestation causes many problems like landslides and migration of birds,” he added, stressing that “it is nature that draws tourists to this place.”

Punta de Manabique, declared a wetland of international importance by the Ramsar Convention on Wetlands, is one of the places facing the most severe threats from deforestation.

Gerónimo Pérez, an agronomist at the Rafael Landívar University’s Institute of Agriculture, Natural Resources and Environment, told IPS that “This area offers protection for coral reefs in the Caribbean, is home to innumerable species of animals and plants, and provides environmental services, like water for local communities.”

But it is being destroyed. “Even though it is protected, deforestation is advancing quickly throughout Punta de Manabique because of the expansion of cattle farms,” he said.

Guatemala’s law on national protected areas states that the conservation and management of wildlife is “fundamental for achieving sustained social and economic development in the country.”

It also orders the protection of these areas by demarcating them, creating categories of management, and establishing controls over the exploitation of resources within their boundaries. But enforcing the law has proved difficult.