GUATEMALA CITY, Jul 16 2009 (IPS) - "This place used to be beautiful. It was truly a mangrove forest. When the shrimp farmers arrived, we lost 60 percent of it because of the logging," said Francisco Vásquez, manager of a hotel on the Pacific coast, in the southeastern Guatemalan department of Jutiapa. 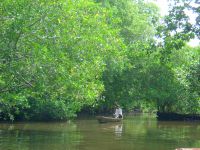 A protected area on Tilapa beach, one of the few mangrove sanctuaries left on Guatemala's Pacific coast. Credit: Courtesy of CONAP

The deforestation led to a build-up of sediment and has had a visible effect on the wildlife, because mangrove forests serve as breeding grounds for many species of fish, mammals and migratory birds, Vásquez told Tierramérica.

According to a study by the Savia School of Ecological Thought, in the past 50 years this country of 108,889 square kilometres lost two-thirds of its original forested area and the biodiversity that it held. The current rate of deforestation is 73,000 hectares per year.

The disappearance of forests has reduced the natural ability to regulate climate and increased the risk of landslides. Furthermore, entire ecosystems have been lost, with their flora and fauna, as well as the capacity to capture, filter and store water, warns the study.

The case of the mangroves is one of the most dramatic, according to ecologists. "Many mangrove forests are destroyed by agribusiness activities such as cotton farming, African palm plantations, shrimp farms, and, more recently, the construction of tourism complexes," Carlos Salvatierra, an expert with the Savia School, told Tierramérica.

Mangrove forests, which grow in coastal zones of tropical countries, "constitute one of the planet's most productive ecosystems for the great quantity of animals it houses – birds, mammals, molluscs, crustaceans – which are important for the livelihood of local communities," he added.

The tangled shape of the mangrove tree, or bush, acts as a natural barrier that filters out pollution, impedes salinisation of the soil, prevents erosion and blocks strong winds.

Despite these natural benefits, and the threats created by their disappearance, mangroves have been decimated without much thought along the Guatemalan coast.

Since 1950 the country has lost about 26,500 hectares of mangrove forests, which represent 70 percent of their total historic area, according to an economic analysis of Guatemala's coastal marine resources, conducted by The Nature Conservancy (TNC Guatemala) in 2008.

According to the analysis, the loss has serious implications, such as increased vulnerability to natural phenomena like hurricanes Mitch (1998) and Stan (2005), as well as a decline in food sources.

Karen Aguilar, an environmentalist with the Fundaeco organisation, believes that deforestation is accelerating.

"The cultivation of the African palm, as well as sugarcane (both intended for production of biofuels), has led to the clearing of vast areas of forests" around the country, she told Tierramérica.

African palm farming has now moved to the southern coast of Guatemala, where it poses a serious threat to the mangals, said Aguilar.

According to the National Institute of Statistics, in 2003 there were 49 entities dedicated to growing African palm, which covered 31,185 hectares. By 2007, the Agricultural Survey concluded that this crop extended across 65,340 hectares – nearly doubling in four years.

There are 14 sugar refineries, with sugarcane cultivated on 216,000 hectares, an area approximately the size of the department of Guatemala City. One of the most serious problems posed by this crop is the excessive use of water, which affects both land and coastal ecosystems, according to the Savia study.

Environmental groups are also sounding the alarm about other ways of destroying the forest, such as land seizures.

"The cases of the departments of Petén (in the north) and Izabal (northeast), in the use of land for illicit drug farms, and the illegal appropriation of land in important nature preserves are just a few examples," which go beyond environmental concerns to questions of security and governability, said Aguilar.

The Guatemalan government had considered increasing the budgets of the Ministry of Environment and Natural Resources and CONAP, but the plan was scuttled due to a decline in tax revenues.

"We believe that the environment is on the government's agenda and that there is support from other areas. However, there are deeper issues, like territorial security, that have not been touched," Aguilar concluded.