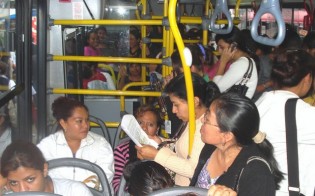 By Julio Godoy, Edgardo Ayala, and Danilo Valladares
A recent agreement between El Salvador and Germany, with the latter supporting two renewable energy projects that would increase installed capacity in the Central American country by 94.2 megawatts by 2013, points to a promising alliance for carbon-free energy.

By Danilo Valladares
An “integral rural development law” to promote access to land, employment and other rights for small farmers is bogged down in the Guatemalan Congress due to opposition from large landowners, who see it as an attempt at land reform.

By Danilo Valladares
"Many tourists come to this area for bird watching, but the terrible deforestation is leading to the disappearance of so much of our flora and fauna. The cleared land is used for cattle ranching,” said Haroldo Figueroa, who works as a guide in nature reserves along Guatemala’s Caribbean coast.

Deaf Ear Turned to Local Opposition to Mines in Guatemala

By Danilo Valladares
As the mining industry booms in Guatemala, local communities are increasingly opposed to the operations of the mainly foreign companies because of the potential negative effects on the environment and on their villages.

By Danilo Valladares
"I was surprised at how hard it was to learn more English. I had looked for work in a bank, but I would have earned only half what I make here, and I'd have had to work more hours," said Carlos de León from his cubicle in a call centre, part of a rapidly growing industry in Guatemala.

By Danilo Valladares
The Maya Indians of Central America and Mexico will have little to celebrate when the current era comes to an end on Dec. 21. The extreme poverty and marginalisation they face contrast sharply with the plans for lavish celebrations to lure tourists.

By Danilo Valladares
From satellites to inter-oceanic canals, the most innovative or ambitious investments in Central America are coming from China - even though six of the seven countries in this sub-region do not have diplomatic ties with the Asian giant.

Guatemala under Pressure to Investigate Shooting of Native Protesters

By Danilo Valladares
The deaths of eight indigenous demonstrators taking part in a protest against the Guatemalan government in the southwestern province of Totonicapán have provoked outrage within the country and abroad. The protesters accuse the army of shooting into the crowd.

By Danilo Valladares
"Our economic situation improved a great deal because we obtained more income for our families" as a result of setting up a social enterprise, Matilde García, who makes fashion jewellery in the municipality of Pastores, 60 km west of the capital of Guatemala, told IPS.

By Danilo Valladares
The Association Agreement between Central America and the European Union (EU) will increase environmental and social pressures on the region, warn experts and activists. But some observers stress its potentially positive impacts.

By Danilo Valladares
In a country as vulnerable to natural disasters as Guatemala, a “state of public calamity” is frequently declared – to the joy of contractors, which find a good opportunity to line their pockets.

By Danilo Valladares
The suspension of the privatisation of a port company unleashed debate in Guatemala about the countless concessions granted to foreign companies in areas like oil, mining, railways and energy, where corporate interests are seen as prevailing over the common good.

By Danilo Valladares
“Service is definitely improving. Transmetro is good quality and Transurbano is using the prepaid system, which means they can’t charge you extra,” said Manolo Contreras, one of the thousands of users of the public transit system in the Guatemalan capital, which is under renovation.

By Danilo Valladares
“I feel proud to be a part of this change. Malnutrition cannot be wiped out in just two or three years, but this is the beginning and I want to be a part of it,” says Isabela Tzoc, a civic service volunteer involved in a youth programme aimed at fighting extreme poverty in Guatemala.

Genetic Research Gives a Ray of Hope in Guatemala

By Danilo Valladares
Cases like that of a little boy with an undetected metabolic disorder whose parents sold everything they owned to cover the costs of medical treatment that was ineffective prompted a doctor to create a vanguard institute of human genetics in Guatemala.

By Danilo Valladares
Access to justice for women who suffer sexual violence in Central America and southern Mexico remains limited despite the high incidence of rape and other crimes, of which underage girls are the main victims, experts say.
Next Page »
ADVERTISEMENT ADVERTISEMENT