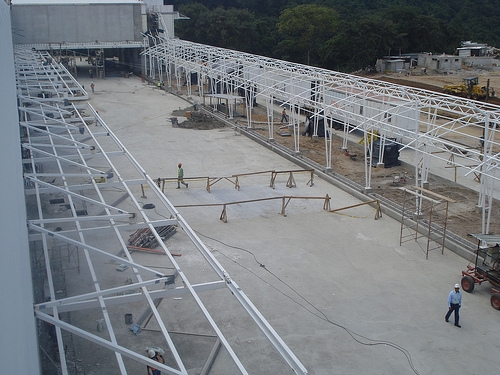 GUATEMALA CITY, Aug 14 2012 (IPS) - “Service is definitely improving. Transmetro is good quality and Transurbano is using the prepaid system, which means they can’t charge you extra,” said Manolo Contreras, one of the thousands of users of the public transit system in the Guatemalan capital, which is under renovation.

The modernisation of the system, expansion of routes and construction of a second bus terminal are part of government and private initiatives to upgrade urban transport in Guatemala City.

“The construction of terminals is a really good thing, because it decongests traffic, generates employment, and makes things safer for passengers,” Lisseth Dávila said.

But both Contreras and Dávila, who spoke to IPS while waiting for the buses that they take to their jobs every day, say a complete renovation of the fleet is needed, as well as an increase in the number of buses, training for drivers, and improved security.

Between 2006 and May 2011, 1,201 people have been murdered on urban and suburban buses, according to the Procuraduría de Derechos Humanos – the office of the human rights ombudsperson. Guatemala has one of the highest murder rates in the world.

The latest project for upgrading the urban and suburban bus service in the capital of this Central American country of 14 million people is the construction of the Centra Norte private bus terminal, which will have shops and restaurants, rest areas, a training centre, and clinics for drivers.

Some 70,000 people will switch buses every day at the terminal, which will consist of 60,000 square metres of construction on the north side of the city. The bus station is set to open on Nov. 15.

“This terminal will make things more comfortable, safer and cleaner for thousands of commuters,” Juan Pablo Paredes, an engineer who is one of the 60-million-dollar project’s supervisors, told IPS.

Paredes said construction of Centra Norte, by a Colombian company Conconcreto and a local firm, would keep 1,600 buses from entering the capital every day, which will cut down on traffic in the city. A similar terminal already operates in the south of Guatemala City.

The city government has also continued to expand the Transmetro system, which uses articulated and regular buses that run along exclusive bus lanes.

Municipal spokesman Carlos Sandoval told IPS that a new bus artery in the centre of the capital would begin operating on Sept. 15, bringing the total to three.

He said Transmetro, which began to function in 2007, is one example of how the mass transit system has been improving.

In a 2011 survey by the Prensa Libre newspaper, 62 percent of respondents described Transmetro’s service as “very good” – a higher approval rating than what was given to other municipal services like waste removal.

“Public transport has had many complications because of poor service, poor quality and lack of safety. But little by little, these problems have been addressed, with the incorporation of new options like Transmetro and Transurbano,” Sandoval said.

The Transurbano system began to function in July 2010, after the government and urban transport companies decided to renovate the bus fleet, beef up security, introduce electronic bus fare cards, install cameras, and place security guards on buses. They even created women-only buses, aimed at preventing sexual harassment, a widespread problem in the city.

The new service brought Guatemala City commuters hope of a safer and more comfortable transport system, although only 455 of the 3,150 buses that circulate daily in the capital have been replaced – in contrast with the much faster progress achieved by the Transmetro system and the bus terminals.

Transurbano spokesman Sergio Reyes declined to predict when the replacement of the entire fleet would be completed. “The vehicle manufacturer in Brazil has kept us on hold while attending to other priorities,” he said in a brief response to questions from IPS.

Transmetro was inspired by other rapid transit bus systems in Latin America, pioneered in the 1970s by Curitiba in southern Brazil. They have generally been successful, such as the Transmilenio system in Bogotá, Colombia. But there have also been relative failures, like Transantiago in the Chilean capital.

Bus rapid transit systems generally have dedicated lanes or bus-only right-of-ways, off-bus fare collection at stations – which become central elements of the system – and a control centre that schedules bus services and operations.

Other initiatives are also emerging in Guatemala. In July, the state-run railway company, Ferrocarriles de Guatemala (FEGUA), signed an agreement with Spain’s Ferrocarriles Españoles de Vía Estrecha (FEVE) to study the feasibility of an urban and suburban rail passenger system in the capital and several provinces.

“Service has generally improved in the city, principally because of the renewal of the Transurbano fleet, while Transmetro has been one of the best solutions,” activist Edgar Guerra, with the Urban Transport Users Association, told IPS.

With respect to Centra Norte, he said “it will be welcomed to the extent that it provides appropriate conditions of safety, hygiene and efficiency in bus transfers.”

Although Guerra acknowledged that progress had been made, he said he was concerned that only four companies dominated service in the Transurbano system, “which is generating an illegal monopoly; if the project continues this way, it will be a failure,” he said.

Eduardo Velásquez with the Centre of Urban and Regional Studies at the public University of San Carlos agreed that things have improved, especially in the Transmetro system.

Other projects like Centra Norte and the installation of an urban and suburban rail system “were planned many years ago with support from the Multisectoral Urban Transport Commission,” made up of authorities, public transport companies, academics and commuters to propose mass transit solutions, he told IPS.

Velásquez foresees serious difficulties for the improvement of the urban transport system in the capital, and especially in suburban areas.

He especially criticised the Transurbano service, which he said was “a shady, monopolistic business deal through which millions of quetzals have been granted to the transport companies without any oversight.”

Urban transport in Guatemala is subsidised by the government, to keep the fare down to one quetzal (13 cents of a dollar).

According to the Ministry of Public Finance, government subsidies for public transport amounted to 275 million dollars between 2004 and 2011.

With regard to suburban passenger transport, Velásquez described it as “chaotic,” and said the drivers were rude and corruption was rampant.