The mild manner of this 46-year-old doctor in criminal law and human rights contrasts with her determination in carrying out her difficult task, to the extent that in August the U.S. magazine Forbes named her as one of “the most powerful women changing the world in politics and public policy.”

In March, Newsweek, another U.S. magazine, named her, among 12 Latin Americans, one of the 150 most fearless women in the world, and in 2011 she was given the International Crisis Group’s Stephen J. Solarz Award for her work “promoting peaceful, just and open societies in some of the world’s most conflict-affected regions.” 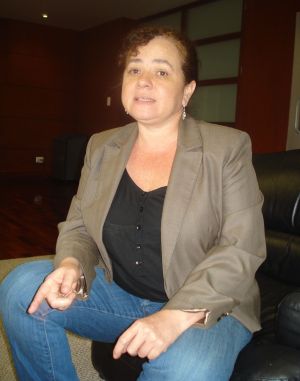 The murder of Argentine singer-songwriter Facundo Cabral is one of the high-profile crimes cleared up under Attorney General Claudia Paz y Paz Bailey. Credit: Danilo Valladares/IPS

In this interview with IPS, Paz y Paz Bailey described how she has started restructuring the public prosecutor’s office, leading to the handing down of a large number of sentences. In this impoverished Central American country of 15 million people, 98 percent of all crimes go unpunished, according to the International Commission against Impunity in Guatemala (CICIG).

Q: Nearly two years after taking office, what do you think has been your greatest success?

A: Building a team to work together, in the attorney general’s office as well as in the different branches of the public prosecutor’s office. That team has allowed things to happen that were previously thought to be impossible, such as clearing up homicides, and pursuing drug traffickers, corruption and so on.

Q: What results do you value the most?

A: Emblematic cases have been solved on the basis of scientific evidence, for instance: the murder of Argentine singer-songwriter Facundo Cabral, the murders of mayoral candidates in San José Pinula, a municipality close to the capital city, and the fraud case involving the mayor of Antigua Guatemala.

Also, over 60 people belonging to Los Zetas (a violent Mexican drug trafficking group) have been sentenced, and extraditable drug traffickers have been arrested, among them many members of the Lorenzana family, as well as Horst Overdick and Juan Ortiz Chamalé.

The justice system had not produced these results in Guatemala before, but now this is happening, and it has also contributed to a 20 percent decline in violent deaths.

The murder rate fell by seven percentage points in that period and has continued to decline.

Q: How have you built your working team?

A: With two basic tools. One is knowledge from the outside of how the public prosecutor’s office works in different instances, such as investigations and diagnoses. And the other is a system of performance evaluation which allows us to assess each person’s work.

Q: Newsweek and Forbes magazines have recognised your work for its fearlessness and achievements. What does this mean to you?

A: The awards are very important because they support not only my action, but our joint action as an institution. One person alone could not do everything that has been done in these two years.

In reality, it is recognition of the work of a team of people. In fact, those who carry out searches or investigations and prosecute cases are a group of prosecutors, men and women.

And that international recognition is echoed in the voices of many Guatemalan citizens who are saying that the work of the public prosecutor’s office has improved. Even people filing charges tell me: I didn’t dare to bring an accusation before, but now I do.

Q: You have successfully prosecuted several military personnel for abuses committed during the 1960-1996 civil war. What outcome do you expect in the case of former dictator Efraín Ríos Montt (1982-1983), who is accused of genocide?

Ríos Montt is being prosecuted for both these cases. The defence lawyers have basically hindered the progress of the trials, rather than present arguments intended to show the innocence of the accused.

This strategy has blocked the Dos Erres case for nearly 10 years. A motion is made and if that doesn’t work, a constitutional appeal is lodged, and so forth.

The inter-American system of human rights has handed down rulings strongly condemning these practices, and there are also judges, both men and women, who refuse to play that game. I hope that now, in the 21st century, we can fulfil the constitutional promise of prompt and effective justice.

Both cases are extremely solid. We expect, of course, a conviction and sentencing.

Q: What would conviction of Ríos Montt mean for the Guatemalan justice system?

A: If there is a verdict of conviction in these cases, as in other instances of particularly violent crimes against life, gender violence or particularly costly crimes like corruption, it sends a signal to society that these things cannot be done, and if they are, there will be consequences in the context of the rule of law, in other words a conviction.

The rule of law is the same for all. It does not matter who the victim is or who the perpetrator, a crime must be punished. Perhaps the only consideration is the gravity of the crime, in making its investigation and punishment a priority.

And in this case, as in others, when we are talking about someone who was head of state, the message of equality before the law is strengthened.

Q: What is your assessment of CICIG’s work?

A: In terms of its work with the public prosecutor’s office, the most important aspect has been the transfer of capabilities in joint cases as well as the strengthening of the crime analysis unit, the financial analysis unit, the department of security and the office of witness protection.

As for the country, it has done away with the sense that the judicial branch was not up to solving certain types of case. CICIG has demonstrated that extremely complex cases can be cleared up with scientific evidence and within the context of the rule of law.

Q: How far will you be able to progress with the fight against impunity during your term of office?

A: The best and most important legacy we can leave is a strategic working method that on the one hand reduces impunity because crimes are cleared up and criminals are punished, while on the other it prevents further crimes being committed.