Q&A: "We Are Changing the Situation of Impunity" 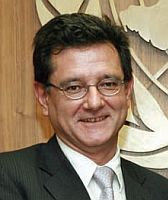 The commission against impunity, an initiative by the United Nations and the Guatemalan government, is currently investigating several high-profile cases in the Central American country with international ramifications.

In an event organised by Human Rights First and the International Peace Institute, Carlos Castresana, who was appointed by U.N. Secretary-General Ban Ki-moon in 2007 to head CICIG, spoke about the commission and its successes so far.

IPS: Can you briefly tell me something about the start of CICIG? Why was it established and how did the process work? CARLOS CASTRESANA: The commission was created because, 10 years after the signature of the peace agreement in Guatemala, which put an end to 36 years of civil war, the situation relating to human rights and the situation of human rights defenders in Guatemala was more or less the same.

They [human rights defenders] continuously experienced attacks from the so-called illegal bodies and clandestine security apparatuses. So they asked for the support of the government, and the government of Guatemala asked for the support of the international community and more specifically the United Nations. They said, “We are willing but unable to protect our citizens, so please help us.”

IPS: So why did it take five years to create the CICIG? CC: As in any legal negotiation, it was difficult. There was the political will from the very beginning but there were a lot of legal problems. CICIG is an innovative institution, basically an international prosecution office which has to work before national tribunals.

And there was a lot of resistance, in some cases political but in other cases legal. It was far from clear if we could be prosecutor and if we could bring cases in front of Guatemalan courts, or if we should be in one way or another coordinating or linked to the work of the attorney general’s office.

So finally after long negotiations and a decision of the constitutional court, it was decided that we could have prosecutorial powers but only as complementary prosecutors to the attorneys.

This was the situation in which CICIG arrived, supposedly to support and enforce institutions of law enforcement, making the division of police and the prosecution office functional. Helping them to bring charges in serious cases changed the situation.

Our task now goes far beyond that. The reality is that we have not only provided technical assistance in many cases, but we needed to clean the institutions who work with us, the division of police and the attorney office. And we have done that to the limit of our possibilities.

Additionally, we have requested the tools, material and personnel necessary to make it work from the parliament, legal institutions and the government.

IPS: Why Guatemala? There are many other countries in the region and in other regions that need a similar approach to impunity. CC: Because Guatemala asked for it. Guatemala went before the United Nations and said, please help me, create a commission to help my prosecution office to function.

It’s true, there are other countries in the region in a very similar situation, Honduras, El Salvador and others. But in those cases there has not been an initiative.

The United Nations can’t come to a country if the country does not agree. An exception on this issue is the Security Council. In this case the U.N. could only give help because Guatemala asked for it.

IPS: Is there a possibility to extend CICIG to Honduras, El Salvador or Colombia? CC: It will depend on the situation, on the government, the political forces and the civil society in those countries. There has not been any other request. But a similar commission has just been created for Pakistan and Lebanon.

But in other cases it’s the initiative of the member states that ask the organisation for one kind of support or another.

IPS: Several right-wing political parties voted against the creation of CICIG. What were their motives? CC: In some cases it was mainly patriotic reasons, and in other cases I think it was just political objections. This situation is changing. I think we have now more support than when we just arrived in the country.

IPS: How would you measure the CICIG’s success? CC: In my view, the most important success is the reaction of the civil society. The society of the Guatemalan people, the NGO’s, the civil rights groups, are beginning to believe that the changes can come. That is the first and the most important thing that we need.