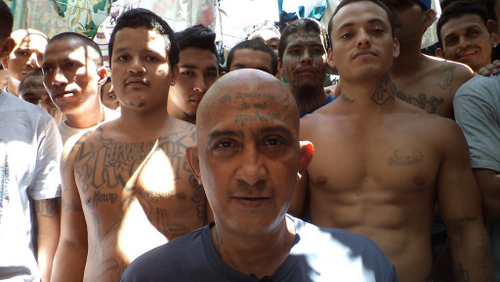 GUATEMALA CITY, Oct 22 2012 (IPS) - El Salvador has managed to bring down one of the world’s highest murder rates thanks to a truce between gangs that was lauded by the United Nations as an example to be followed in other countries of Central America.

But experts question the sustainability of the truce and call instead for government policies focusing on prevention and social reinsertion.

“Efforts should focus on keeping young people from joining gangs,” said Armando Samayoa, with the Institute of Social Cooperation, a non-governmental organisation in Guatemala that offers non-formal education and provides recreational spaces for youngsters, to help prevent them from falling into gangs.

The activist told IPS that once young people had joined the gangs – known as “maras” in Central America – and were involved in criminal activities, it was a much more complex task to rehabilitate them, one which required a major investment in funds.

“If we look at public spending on the security forces compared to what goes towards prevention programmes, there is a vast difference,” he said.

The truce between the Salvatrucha and Barrio 18 gangs in El Salvador brought immediate results: the number of homicides in that country of 6.3 million people dropped from 13.6 a day in February to 8.2 in March, when it went into effect, according to a United Nations Office for Drugs and Crime (UNODC) report released in September.

The study, “Transnational Organized Crime in Central America and the Caribbean: A Threat Assessment”, reports that the murder rate in El Salvador stood at 69 per 100,000 citizens in 2011, six percent up from 2010.

According to the UNODC, Honduras and El Salvador have the highest murder rates in the world.

The UNODC believes the truce in El Salvador could serve as a model for other Central American countries to follow, as a mechanism to fight crime.

But Samayoa emphasises that programmes of non-formal education such as the ones offered by his NGO, which include courses in English, carpentry, baking and cooking skills, computer training, sports, and running a small business, help prevent youngsters from falling into the hands of gangs in the first place, while a truce can break down at any moment.

“I remember a case in Villa Nueva, on the south side of the capital, where the gangs reached an agreement,” he said. “But the next day, they came to our organisation to say that they had to feed their families,” which meant that they had to continue committing crimes, he added.

Alma Aguilar, with the Guatemalan organisation Paz Joven (Young Peace), also said public policies in the region should be aimed at preventing youngsters from joining gangs, as well as at fighting crime.

“It is a multifactorial problem, and thus should be approached from many angles,” she told IPS. “As young people, we believe that the important issue is to prevent youths from becoming involved in illegal activities.”

She said governments should guarantee, “at the very least,” education up to the first years of secondary school, and should make an effort to ensure that young people have employment opportunities, “which unfortunately is not happening.”

Aguilar said the Salvadoran truce “is a successful experience to be taken as a case study,” although “the government should guarantee peace and order in conflict-stricken areas with the full weight of the law coming down on those involved in crime.”

The maras originated in the 1970s and 1980s in Los Angeles and other U.S. cities where Central American migrants and refugees became gang members and were later deported to their countries of origin. Thousands of young people in El Salvador, Honduras and Guatemala are now involved in maras, which have morphed from violent youth gangs to organised crime groups.

On Oct. 11, the U.S. Treasury Department announced it was adding the Mara Salvatrucha to its list of the most dangerous Transnational Criminal Organisations “for its involvement in serious transnational criminal activities, including drug trafficking, kidnapping, human smuggling, sex trafficking, murder, assassinations, racketeering, blackmail, extortion, and immigration offences.”

Under U.S. law, this gives the Treasury the authority to target the gang with economic sanctions

The governments of El Salvador and Honduras have unsuccessfully tried to curb the growing power of the maras with tough anti-gang laws, which make it possible, for example, to arrest youngsters merely on suspicion of belonging to gangs.

The controversial truce reached in March by the main gangs in El Salvador was agreed without the participation of the government of moderate left-wing President Mauricio Funes, although the administration was widely assumed to have played an unspecified role as a facilitator.

The government is now taking early steps towards possible negotiations with the two gangs, to get them to put a definitive end to their criminal activities.

“The truce has produced good results in terms of reducing homicidal violence, but that’s all,” lawyer Ismelda Villacorta, with the Foundation for the Study and Application of Law (FESPAD) in El Salvador, told IPS.

The expert hesitated to say she was “absolutely optimistic about its results,” since other kinds of crime “are still as serious and worrisome as they were before the truce, or even worse in some areas.

“This entire situation shows that the reduction in homicides brought about by the truce is balanced on a weak platform that could collapse at any moment, and things could return to the way they were – or the number of homicides could soar even higher,” she said.

She suggested that the starting point to make the truce and the reduction in violent crime a lasting phenomenon should be to promote a programme of prevention at all levels, including the reinsertion and rehabilitation of gang members.

Isabel Aguilar, a human rights defender with the Guatemalan organisation Interpeace, told IPS that “the truce will be sustainable if it helps usher in a broader dialogue in which all segments of society would be involved and would contribute, with determination and commitment.

“The important aspect is that the truce makes possible, or generates the openness necessary for, prevention and reinsertion activities to be carried out in more fluid, sustainable ways, on more fertile ground,” added Aguilar, the coordinator of the multisectorial Central American programme of public policies to prevent youth violence.

In that sense, she was more optimistic, saying the truce “is an example to be followed, especially because it is demonstrating its effectiveness in reducing the high rates of violence.” She said, however, that it would have to be adapted to the situation of the different countries in the region.

But for now, the right-wing presidents of Guatemala, Otto Pérez Molina, and Honduras, Porfirio Lobo, have ruled out the possibility of promoting agreements of this kind between gangs in their countries, or seeking any kind of negotiations between their governments and the maras.