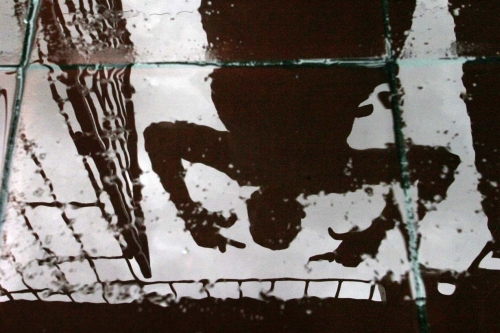 SAN SALVADOR, Apr 23 2012 (IPS) - A truce negotiated between El Salvador’s main gangs has drastically reduced murders and encouraged hope that this country may have found a way out of the labyrinth of violence in which it seemed lost. But the deal is fragile, causing uncertainty.

After the leaders of the two main gangs in the country, Mara Salvatrucha (MS-13) and Barrio 18, agreed a truce on Mar. 9 in the maximum security prison where they were confined, mediated by the Catholic Church and a civil society representative, murder rates have declined significantly, from 14 to five or six a day.

The truce “is a source of hope, but that does not make it robust,” leftwing commentator and former guerrilla commander Dagoberto Gutiérrez told IPS.

A homicide reduction policy that relies on the goodwill and determination of gang leaders “is plagued with risks and uncertainties,” he said.

The order to stop attacking rival gangs, as well as soldiers, police and security guards, was obeyed by gang cells or “clicas” all over the country.

One of the uncertainties is how long the clicas will follow their incarcerated bosses’ directives.

In 2011 there were 4,374 murders in El Salvador, equivalent to a homicide rate of 70 per 100,000 population, one of the highest in the world, according to several international studies.

“We are aware that we have failed God and society, and on behalf of all my gang, MS-13, I want to ask for forgiveness from society, and ask that you give us an opportunity to change,” said MS-13 leader Dionisio Umanzor at a mass celebrated Mar. 26 in the prison of Ciudad Barrios, in the eastern province of San Miguel.

However, these gangs have not said that they will give up other forms of crime, such as extortion, which affects a large proportion of El Salvador’s 6.2 million people.

Over the last year, different opinion polls have shown that for Salvadorans, violence is the most pressing problem.

On Apr. 14, President Mauricio Funes told heads of state meeting at the Sixth Summit of the Americas in Colombia of an “unprecedented” event: it was the first day in decades that not a single murder had been reported in El Salvador – although later in the day there was, in fact, one killing.

According to a report published by the online newspaper El Faro on Mar. 14, in return for an end to the bloodshed, the government agreed to transfer the top leaders of the gangs from the maximum security Zacatecoluca prison, known as “Zacatraz”, in the central province of La Paz, to lower-security prisons.

The government denied participation in the agreement between the “maras”, as the gangs are popularly known, although it confirmed it had transferred the gang leaders at the request of the Catholic Church mediator, Bishop Fabio Colindres.

“My request evoked a response and as a result, crime, the worst problem in this country, has been turned around,” Colindres told IPS.

The maras originated in the 1970s and 1980s in Los Angeles and other U.S. cities where Central American migrants and refugees became gang members and were later deported to their countries of origin.

Conditions of poverty and marginalisation led young Central Americans without a future to swell the ranks of the maras.

“I joined a gang in Los Angeles in 1978. I was marginalised in the United States and also back in my own country, without any employment opportunities or anything,” Luis Romero, a Salvadoran former gang member who runs Homies Unidos, an organisation working for the social reintegration of former gang members, told IPS.

In Romero’s view, the truce between gangs is the most positive opportunity yet to confront the violence, which past and present governments have attacked with methods that have emphasised repression rather than prevention.

“We have been waiting for something like this for years; it is a ray of hope,” he said.

Jeannette Aguilar, head of the Public Opinion Institute at the Central American University, agreed that the decline in homicides is cause for celebration. But she is concerned that it is not the result of a public policy embodying the will of the state to provide prevention and reinsertion services.

“A situation like that of El Salvador can only be solved sustainably through a public policy with actions for the short, medium and long terms,” Aguilar told IPS. And such a policy must include proposals from the rest of civil society.

“I am concerned about the situation, because it is very unpredictable,” she said.

On Mar. 28, Funes called on all sectors of the country to participate in a national pact to create opportunities for gang members wanting to rejoin society.

The business community will have an important role to play, in terms of providing jobs for former mara members, who have traditionally been discriminated against because of tattoos that identify them as belonging to a gang.

In mid-April, Ministry of Justice and Security officials announced a plan to create employment training centres at a cost of 20 million dollars, so that former gang members can learn a trade to help them reintegrate into society.

According to Gutiérrez, financing the plan will be a major challenge in the current difficult situation in the country and the world, which makes it hard to find resources for a sustainable reinsertion project.

For their part, gang members have proposed that the government devote its annual 42-million-dollar subsidy for public transport companies, which are subject to regular extortion by the maras, to reinsertion programmes. But the transport companies have dismissed the idea out of hand.