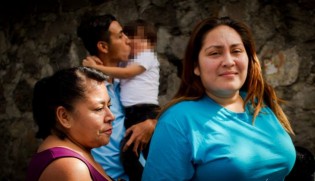 By Peter Costantini
The specters of slave patrols and Ku Klux Klan night riders haunted the viral videos. They showed cowboy-hatted Border Patrol agents on horseback insulting and threatening Haitian families with children as they crossed the Rio Grande into Texas. The outrage reverberated around the world and inside the Beltway. But the story soon disappeared from the news cycle.

Drop Boxes Tell Tale of US Democracy in 2020

By Peter Costantini
It sits stolidly, bolted onto a concrete base outside the Maricopa County Recorder’s office in Phoenix, Arizona. Weighing in at around 600 pounds,  it sports “anti-tampering features” and “heavy-duty, all-weather construction”. Security agents check it periodically and it appears to be watched by a camera. As I scrutinize it, a man in an SUV pulls up and deposits a ballot in its slot. He tells me he votes this way every election, then drives off.

By Peter Costantini
On a hillside overlooking Port-au-Prince, a muscular Haitian man in a green tank top raises a heavy steel pry bar over his head and brings it down into a hole, shattering a bit of Haiti’s limestone skeleton.

By Peter Costantini
In the evening the lowering clouds burst. Through the night they loosed their torrents on the southeastern coast of Haiti.

By Peter Costantini
Haitian farmers are worried that giant transnational corporations like Monsanto are attempting to gain a larger foothold in the local economy under the guise of earthquake relief and rebuilding.

By Peter Costantini
In the wake of unimaginable death and destruction, Haitian farmers continue to work hard to wring food for their country out of a depleted land. But now they have company.

By Peter Costantini
There are shortages of lots of things in Haiti: clean water, arable land, trees, living-wage jobs, housing, schools, fuel, reliable sources of electricity and Internet access. But one thing Haiti has in abundance is sunny days.

The Sun Lights Up the Night in Haiti

By Peter Costantini
Photovoltaic panels are gradually appearing in Haiti, alongside streetlights, in a demonstration of what the Sun can do in a country with severe energy problems.

By Peter Costantini
Reckless greed on Wall Street is a dog-bites-man story. Still, the renewed feeding frenzy of the alpha dogs of finance in the embers of the bonfire of their own vanities has inspired amazement and disgust across the political spectrum.

By Peter Costantini
In the wake of a blizzard of economic hardship across North America, native land of the financial crash of 2008 and ensuing Great Recession, the shapes of other possible worlds are emerging from the drifts. Some are frozen and dystopian, but others may harbour green shoots of hope.
Next Page »
ADVERTISEMENT ADVERTISEMENT